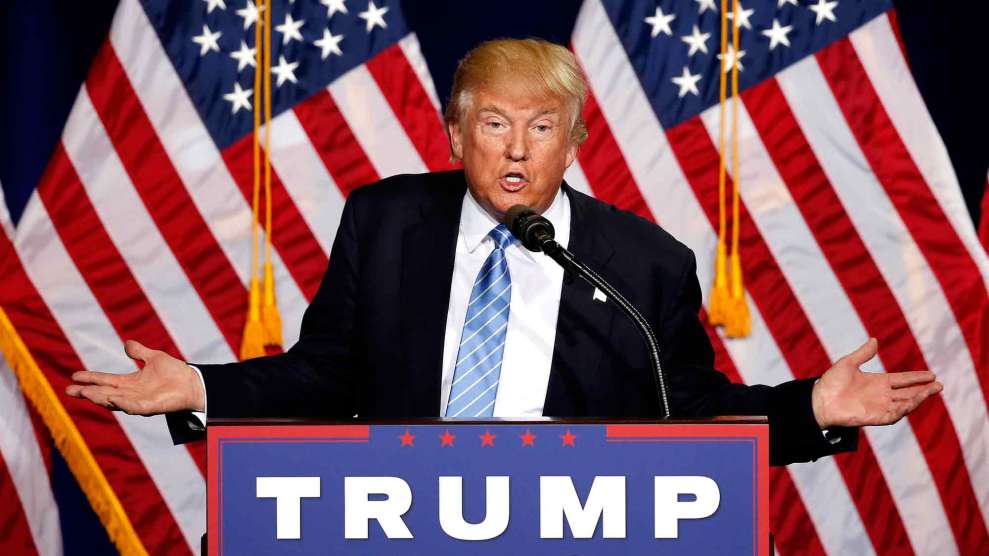 Remember the Democratic convention, when Hillary Clinton was ringingly endorsed by a squad of top former military officials, led by retired General John Allen, who delivered one of the more rousing speeches of the week? That event and a host of subsequent endorsements from former military leaders and foreign policy experts have made it seem that Clinton has the edge over Donald Trump in drawing national security professionals to her cause. (Last month, a group of 50 GOP national security wonks signed a letter declaring that Trump “would be a dangerous President and would put at risk our country’s national security and well-being.”) Now Trump is fighting back. On Monday, he released a list of 88 former generals and admirals who back his presidential bid.

The New York Times notes that a handful of these Trumpers are “known for making controversial statements. The paper cites retired Lt. General William Boykin, “who was criticized by President George W. Bush for describing the battle against Islamist terrorists as a religious proxy fight between a ‘Christian nation’ and the ‘idol’ of Islam.” It also points out that retired Lt. Gen. Thomas G. McInerney, a Fox News analyst who is on the list, “has previously submitted court documents challenging President Obama’s eligibility to serve as president, accusing him of not having been born in the United States, an accusation Mr. Trump himself once raised.” (Once raised? How about championed like a conspiracy-theory wingnut?)

It’s no surprise that a Republican candidate who has bashed the Iran nuclear deal and called for spending more money on the military could round up this band of former generals and admirals. But here’s the real story: Mitt Romney, during the 2012 campaign, had 500 retired generals and admirals on his side. That group took out an ad in the Washington Times to show their support for the then-Republican nominee. And the Romney crew had much more star power than Trump’s posse. As the Washington Times then reported, “The [Romney] list contains a number of prominent four-star admirals and generals, including five former members of the Joint Chiefs of Staff.”

So as Trump preps—or doesn’t prep—for a candidates forum on national security hosted by NBC and MSNBC on Wednesday night, the news really isn’t that he found four score and eight retired military officers to back him; it’s that this is a significant drop from the amount of support that the last GOP nominee attracted from retired military bigwigs. In fact, it’s a huge retreat.