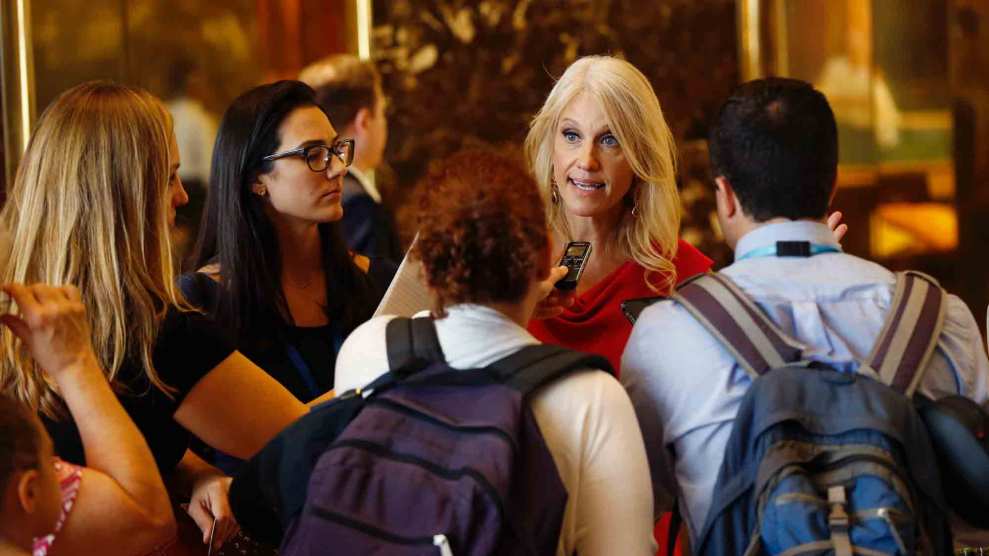 Immediately after the news broke that Hillary Clinton had said that half of Donald Trump’s supporters were racist, sexist, homophobic, xenophobic, or Islamophobic and belonged in a “basket of deplorables,” Kellyanne Conway, the GOP presidential nominee’s campaign manager, tweeted: “One day after promising to be aspirational & uplifting, Hillary insults millions of Americans.” And then she went on the warpath. On MSNBC on Monday, she lit into the former secretary of state:

One of the most candid moments for Hillary Clinton came Friday night when she actually—we got her true feelings about what she thinks about tens of millions of Americans. That is so personally offensive to me. I grew up with laborers…Sticking people in mass into categories is exactly what we shouldn’t do as Americans.

Conway added, “What’s not okay is for Hillary Clinton to malign the character and the intention of millions of people.”

During a CNN appearance the next day, she angrily insisted Clinton had been “so dismissive of tens of millions of Americans.” And Conway went on:

I just wish that she would respect the hard-working men and women of this country who she thinks are a bunch of uneducated rubes coming down from the hills with no teeth and long fingernails and just—you know, they need to be schooled by this precious woman in New York at Cipriani talking to people who are laughing at Americans.

Conway’s outrage, though, was selective, because in the past she has slammed millions of Americans for acting like pigs. Yes, pigs. She called millions of people pigs.

In January 2008, Conway was a guest GOP talking head on Fox News. With the subprime mess wreaking havoc on the economy, then-Rep. Barney Frank, a Democrat, had written an article explaining the need for greater government intervention to preserve the integrity of financial markets and to reverse unacceptable levels of income inequality. Conway, not surprisingly, criticized Frank’s call for more government regulation of the markets. When the host asked if Wall Street too often takes advantage of Main Street investors, Conway went on a tear:

I think that’s unfair because these people bought houses they could not afford. I mean, Julie, if you go out tonight and you spend $10,000 on a credit card and you make $8,000 a year, you could do the math. So people bought houses they couldn’t afford. They know that. This country spends money like a bunch of pigs. They buy things they say that they need…when they actually want them. That’s their business. But they should be in charge of their own economic sovereignty.

The notion that Americans were pigs was apparently much on Conway’s mind at that time. That same month, she was part of a panel discussion at the Council on Foreign Relations. When she was asked a question about the role of economic issues in the 2008 campaign, she suggested that the key factor was whether voters would blame the lousy economy on the Iraq War or acknowledge their own piggish actions were to blame:

I think that [moderator Joe Klein’s] point about what is the cost of the [Iraq] war and how does that play into the economy vis-à-vis the American’s mind—If [voters] say, “Gee, we’re having a problem in this country economically because of the cost of the war, not because I live like a pig off my credit cards (which most people won’t admit in this country),” then, I think, it’s a whole new problem for some of the candidates, particularly on the Republican side.

That is, the US economy was in trouble not because of deregulation, Wall Street misdeeds, or spending on the Iraq War, but because many Americans “live like a pig.”

With these remarks, was Conway, right or wrong, dismissing and insulting millions of Americans? It seems so. Using her own standards of this week, you might even call these statements deplorable.