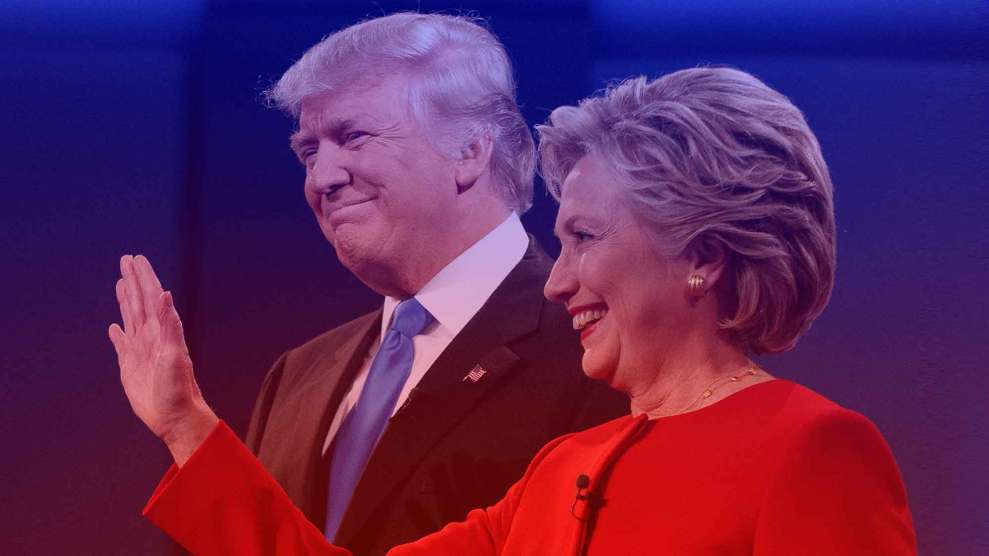 One of the sharpest moments of the first debate between Hillary Clinton and Donald Trump came when the former secretary of state told him, “I know you live in your own reality.” In fact, the 90-minute-long slugfest was a clash of realities. When Clinton pointed out that Trump believed climate change is a hoax perpetuated by the Chinese government, he said this was false. But it’s actually what he had said. When moderator Lester Holt pressed Trump on his racist birther crusade, Trump again tried to pin birtherism on Clinton and said that he dropped the issue after President Barack Obama produced a long-form birth certificate. That wasn’t true. Asked about race relations in the United States, Trump propounded on the need for “law and order” and declared the murder rate in New York City has gone up. No, not so.

This was a battle of two views of the world. In Trump’s world, America is experiencing a historic crime wave and it “loses on everything.” The nation’s leaders have not done anything to fight terrorism. And he opposed the Iraq War from the beginning and ISIS began under Obama and Clinton because they pulled US troops out of Iraq. None of this is true. He also proclaimed, “My strongest asset…is my temperament.” At best, that’s a—no pun intended—debatable point.

The major difference between Clinton’s and Trump’s worlds was put on display at the outset. In Clinton’s opening question—responding to a question about the economy—she mentioned about a dozen policy proposals: investing in manufacturing, boosting clean energy programs, raising the minimum wage, equal pay for women, profit-sharing for employees, paid family leave, affordable child care, debt-free college education, ending corporate tax loopholes, increasing taxes on the wealthy, and more. Trump spent his opening moments railing against China and Mexico and decrying jobs “being stolen from us.” It was Clinton the policy wonk promoting nifty ideas to make the nation stronger versus Trump the angry man blaming foreign enemies and vowing in strongman fashion that he will somehow get results.

These are two different ways to consider the nation’s current predicaments and ponder possible solutions. And the fact that (so far) the electorate is closely divided between the two suggests a deep cleavage in the body politic: Trump voters are from Mars, and Clinton voters are from Venus. Immediately following the debate, CNN pundits (that’s what was on the television screen at the media filing room where I was) pronounced the debate a win for Clinton, and instant focus groups backed them up. She was calm and knowledgeable; Trump could not control his excesses. (He defended having called Rosie O’Donnell a “pig”! He practically admitted to not paying taxes. He explained stiffing contractors by saying they did crappy work. He falsely claimed that Clinton’s 2008 campaign sent a reporter to Kenya to investigate Obama’s birth. He conceded he exploited the housing market crash that triggered an economic collapse, noting, “That’s called business.”) Clinton prevailing was a fair assessment, but the question is: Does it matter? Trump is a candidate who vents. Facts don’t matter to him. They may not matter to many who want to send an angry bully to Washington to beat up all those elitists there.

Before the debate, I spoke to a senior Trump surrogate who told me the Trump campaign was quite pleased with recent developments: “His message, his themes are being heard. It’s working. We’re connecting. People are giving him due consideration. People are angry. He just needs to stick to these themes and messages.” And his themes are memes: law and order, bring our jobs back, she’s low-stamina, make America great again. Do these transcend the nitty-gritty of the debate and the usual political discourse?

Clinton surrogates point out that despite whatever happens in this debate—and perhaps in subsequent face-offs—her campaign remains focused on organization: Virginia, Colorado, Pennsylvania, Ohio. The campaign’s message to fellow Democrats has been: Don’t wet the bed, we’re plodding ahead with the tough work of politics. In other words, it’s not about memes, it’s about boots on the ground (and online). So the debate performance, while important, would not be determinative. That’s a fine theory.

Prior to the debate, I had an odd moment with retired Gen. Michael Flynn, Trump’s top national security adviser and supporter. He was standing in the spin room in the media center. He said he had no time to chat, so I tossed him an easy and conventional question: What does Trump have to do this evening? Trump, he said, “needs to show those people not paying attention who Donald Trump is.” And who is Trump? Trump “resonates,” Flynn said, because “he comes across as a very honest guy against someone who is not honest.”

Trump as honest? Honest when he says he knows more about ISIS than the generals? Honest when he talks about…well, check out this list of recent Trump lies and whoppers. Of all the ways a surrogate can support Trump, declaring him honest is not serious. (And, yes, Clinton has told her own whoppers, but any reasonable fact-checking of this debate will find that Trump mugged the truth so much more than she did.)  I didn’t quite know how to follow up Flynn’s assertion. It was as if he had said the sky is purple. Does he truly believe Trump’s top character trait is honesty? But this did bring home the point that life on Planet Trump looks quite different from life in the rest of the universe.

This election is not about which candidate has better policies or even better qualifications. It’s about how voters see the world. Is the dress white and gold or blue and black? Clinton did appear to have a better night than Trump. But it also seems that much of what’s going on in this campaign is not open to debate.