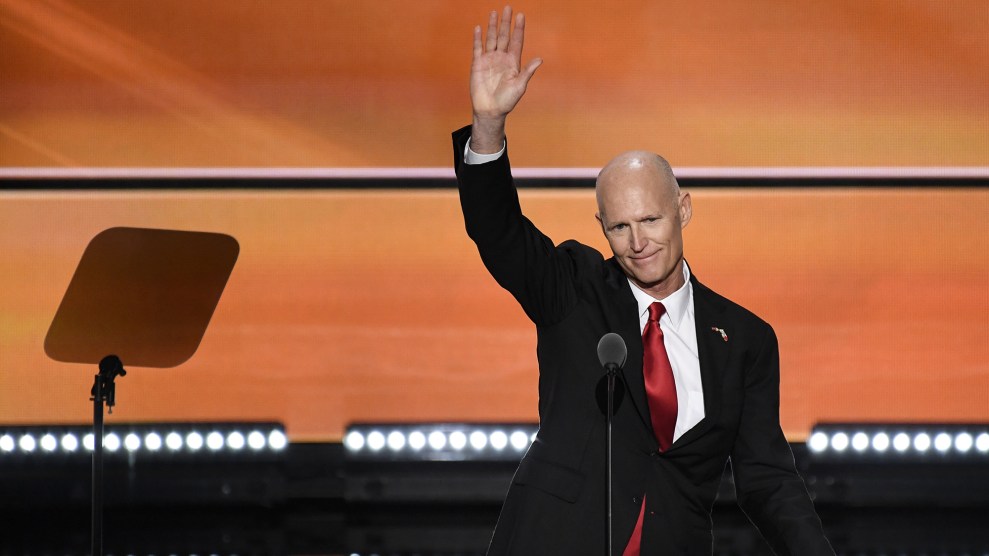 The day after Donald Trump won the Republican primary in Florida, Rick Scott, the state’s Republican governor, endorsed the New York businessman. Scott declared that it was time to unite behind Trump, writing in a Facebook post, “If we spend another four months tearing each other apart, we will damage our ability to win in November. It’s time for an end to the Republican on Republican violence.”

To many Florida Republicans, that must have smacked of hypocrisy. Scott, party insiders say, has perpetrated his own violence against the state party, sowing dysfunction in a once-formidable operation. Now, with Trump counting on the party organization to get out the vote for him in November, Scott could end up being responsible for Trump’s defeat.

“The Republican Party of Florida is fractured and weaker than it has been in quite some time,” says Aubrey Jewett, an expert in Florida politics at the University of Central Florida. “The problem for the Republicans is that there’s sort of an every-candidate-for-themselves mentality right now, starting with Rick Scott.”

It would be almost impossible for Donald Trump to win the election without carrying Florida. With polls showing a razor-tight race for its 29 electoral votes, FiveThirtyEight calculates that it’s the state most likely to tip the election. Scott’s support would, in theory, help put Trump over the top. Not only did Scott endorse Trump; he’s also the chair and fundraising force behind a super-PAC supporting Trump nationwide.

And Trump badly needs the state party’s help. In a close race, campaigns rely on their field operations to get out the vote. But throughout the summer, Trump had just one field office in the entire state; Clinton had 51 by Labor Day. (Thanks to the national party’s efforts, Trump now has 26 to Clinton’s 57.) Typically, the state party would step in to raise funds and turn out voters, and the governor would lead the way. But Scott has so thoroughly damaged the state party that this may no longer be possible.

The collapse began in January 2015, when the state party passed over Scott’s favored pick for party chair and chose a newly elected state representative named Blaise Ignoglia. “Normally, when you’re the governor of Florida, then you get to pick who will be the chair of your state party; that’s kind of a de facto thing,” says Jewett. “That was a slap in the face to the governor.”

Scott didn’t take the slap lightly. While he had never been cozy with the party establishment—he first won election by beating the establishment’s choice in a close primary—Scott essentially walked away from the party after the slight. Before Ignoglia’s election, the state party had collected funds raised by the governor and the Republican leadership in the state Legislature, in addition to the party’s own funds. But after Ignoglia became chairman, there was a run on the party bank. Scott took the $580,000 he had raised out of the party’s account and put it into his own fundraising vehicle; ever since, he has funneled all his fundraising into his own committee instead of raising money for the party. Scott’s schism with the state party left it effectively in the hands of the state House—of which Ignoglia was a member—prompting the Republican leader in the state Senate to withdraw $800,000 from the state party and move it to the Senate Republicans’ fundraising committee.

All that was left in the state party account was the funds raised by the party itself and by its House leadership—not enough to fund the massive voter turnout effort that Ignoglia had promised for the 2016 race when the party elected him. In 2008 and 2012, President Barack Obama won Florida by the sheer force of his ground game, which brought hundreds of thousands of new voters to the polls. Ignoglia had plans to ramp up his party’s own efforts to match the Democrats.

“We were very ambitious before the wheels came off,” says John “Mac” Stipanovich, a longtime Republican operative in Florida who is not supporting Trump.

“We were very ambitious before the wheels came off.”

The party has never fully recovered. By fall 2015, it was struggling to pay its bills. It hosted a presidential summit in Orlando to raise money, but Scott didn’t attend and the event fell short of its fundraising target. In December, the party brought in former Gov. Jeb Bush, then in the middle of his presidential campaign, to host a fundraiser. A month later, under financial strain, the party cut payroll by laying off its chief financial officer.

“Florida Republican structures are dysfunctional right now,” Ana Navarro, a Florida-based Republican activist who is not supporting Trump, says in an email to Mother Jones. Ignoglia and Scott “don’t seem to be singing from the same hymn book. There seems to be little [if] any coordination between the Trump campaign and the [Republican Party of Florida].”

Ignoglia denies that tensions with Scott have affected the party’s operations this year. The state party and the Republican National Committee “have been working hard together in laying the groundwork for the better part of two-years,” he says in an email. “We have also done intensive training for Get-Out-The-Vote efforts so we can capitalize on volunteer passion, as we head to election day.”

In the past, the state party’s ground game helped put Republican candidates on top, particularly during Jeb Bush’s governorship, from 1999 to 2007. “They had an impressive, almost sort of like Chicago-style statewide machine politics,” recalls Steve Schale, a Democratic strategist who ran Obama’s successful Florida operation in 2008. George W. Bush won Florida in 2000 “because Jeb had a better operation and that made the difference.” Scott, Schale says, “just doesn’t really have an operation” like Bush did.

Scott, an uberwealthy businessman, won his 2010 race by spending record-breaking sums, mostly on television ads. In 2014, he won a second term largely the same way. “He beat us two times in a row just by sheer force of money,” says Schale. “But neither time did he really have an operation on the ground.”

That’s a problem for Trump. Scott can’t offer Trump the kind of political machine that many governors can deliver. It’s unclear how much he will campaign for Trump (or how much it would help, given his low approval rating). He may not even be helpful in raising money for Trump in Florida, since the super-PAC he leads is nationally focused. Perhaps the one thing Scott has gifted to Trump is a small dose of manpower: Three of his former staffers have taken top jobs with the Trump campaign.

Trump has openly rebuffed the idea that a ground game is necessary to win, in Florida or elsewhere. Karen Giorno, who until recently ran Trump’s Florida campaign and briefly did event planning for Scott, believes the campaign will win on the basis of big rallies rather than door knocks and voter registration. “We’re running a unique campaign in the sense that we can draw 15,000 people together at a time,” she told the Tampa Bay Times last month. “There are over 40,000 people that we’ve touched in the last two weeks with just four events.”

But the party’s ground game is even more critical when the candidate isn’t focused on those efforts. “The importance of the state party is inversely proportional to your other means of securing the same services,” says Stipanovich. “Historically, what the party has basically done is provide the get-out-the-vote efforts, phone banks, ads for state candidates.”

If the party were as strong as it once was, “there would absolutely be more of a sense of quiet confidence among the party statewide that we were going to win, a sense of strength,” says Brett Doster, a Republican consultant who calls himself a reluctant Trump supporter. “But right now I think there’s a lot of uncertainty and a lot of frustration about a lack of direction.”