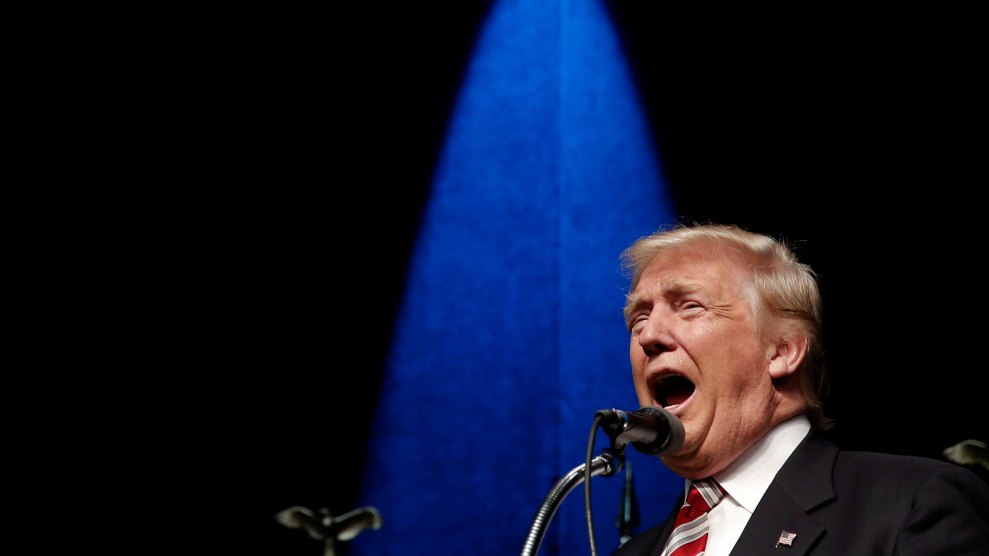 Donald Trump dropped by the Waldorf Astoria in Midtown Manhattan on Thursday to outline his economic proposals to a roomful of New York businessmen. Most of it you’ve heard before: He’ll cut corporate taxes and pay for it by renegotiating trade deals and demanding that foreign countries like Japan and South Korea reimburse 100 percent of the cost of stationing American troops there. (“They don’t pay us! I say, ‘Why? Because we don’t ask!'”)

But Trump also took some time to disparage his opponent, former Secretary of State Hillary Clinton, for heaping “scorn and disdain” on tens of millions of Americans. Trump was referring to Clinton’s comments last Friday, at a fundraiser just a few miles away hosted by Barbra Streisand, when Clinton said half of Trump’s supporters were “irredeemable” on account of their racist, sexist, or homophobic views. (This was all a way of saying—if you’ve been living under a rock—that those voters were a “basket of deplorables” she had no shot at winning.)

Clinton has received a good deal of blowback for those comments. But speaking to an almost entirely white room on Thursday, Trump ripped into Clinton in a way that severely distorted her comments.

“My opponent described tens of millions of American citizens as deplorable and irredeemable,” he said. “How can Hillary Clinton seek to lead this country when she considers its citizens beyond redemption? The hardworking people she calls deplorable are the most admirable people I know. They are cops and soldiers, teachers and firefighters, young and old, moms and dads, blacks, whites, and Latinos. But above everything else, they are all American. They love their families, they love their country, and they want a better future.”

Trump on Clinton: “The hard working people she calls deplorables are the most admirable people I know.” https://t.co/qhf20TjJIL

Except Clinton wasn’t referring to black and Latino voters as “deplorables.” She was referring to people who don’t like black and Latino voters as deplorable. It’s a difficult dance: Trump is trying to deflect his campaign’s documented embrace of white nationalist supporters and the like—his campaign CEO ran a website that has a “black crime” vertical—by recasting Clinton’s criticism of such bigotry as bigoted.

Trump, one day removed from a visit to Flint, Michigan—and just a few hours after disparaging the pastor who had welcomed him to her church—used the embattled city as both a cautionary tale and a punch line. Telling the affluent attendees of Thursday’s event that he “spent a lot of time in the city of Flint,” he pivoted to a discussion of Ford’s announcement Wednesday that it was moving much of its small-car manufacturing from Michigan to Mexico.

After the speech, as he was interviewed onstage by the hedge fund titan John Paulson, Trump returned to the idea of political correctness he had attacked earlier. PC thinking was ruining America, he said. “People are afraid to walk, they’re afraid to talk, they can’t speak,” he said. It’s deplorable.