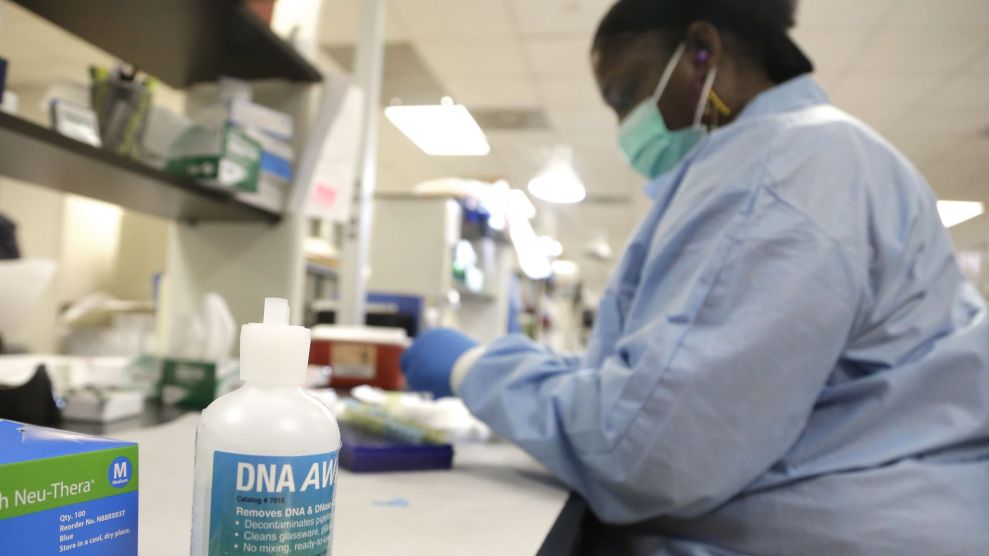 The Department of Justice announced more than $38 million in funding on Monday to help state and local agencies address the backlog of untested sexual-assault kits. The funding, part of a national initiative launched last year, will go toward increasing the inventory and the testing of kits, training law enforcement officers on sexual-assault investigations, helping police departments collect DNA that could lead to the identification of serial sex offenders, as well as several other efforts.

Sexual-assault kits, more commonly known as rape kits, are the DNA swabs, hair, photographs, and detailed information gathered from victims of sexual assault and used as evidence for the prosecution of rapists. The forensic exam can often be long—from four to six hours—and, as activists note, invasive, but it can provide key evidence for identifying assailants. But getting the contents of a rape kit tested is expensive, costing between $1,000 and $1,500 on average. Lack of funding in police departments, as well as murky protocols around testing, has created a backlog of more than 400,000 untested kits across the country, according to a 2015 estimate. As a result, victims may never see their cases prosecuted, and serial rapists could go on to commit more crimes. New York, among other states, is still in the process of counting the number of untested kits it has, while others simply do not know how many untested kits there are, according to the Joyful Heart Foundation’s Accountability Project.

This round of funding could go a long way toward helping cities and police departments close cases, identify serial offenders, and better handle sexual-assault cases in the future. (Last fiscal year, the DOJ awarded nearly $80 million in grants to state and local agencies in 27 states, but there are still states that have yet to participate in the initiative.) After Detroit received a pilot grant to test rape kits, its police department has been able to make DNA matches, identify potential serial rapists, and secure convictions against perpetrators. In a 2011-13 DOJ-funded study on rape kit testing in Detroit, researchers had found that in many cases, law enforcement stopped investigating cases after minimal effort and were biased in how they conducted sexual assault investigations, with officers expressing “negative, victim-blaming beliefs about sexual assault victims.” The DOJ later released guidance on how police departments could better address gender biases in how they investigate sexual assault and domestic violence. A study this June by Case Western Reserve University of nearly 5,000 rape kits collected in and near Cleveland found that serial rapists are more common than previous research has suggested.

Maile M. Zambuto, CEO of the Joyful Heart Foundation, a sexual-assault advocacy organization, applauded the new funding in a statement. “Testing rape kits sends a fundamental and crucial message to victims of sexual violence,” she said. “You matter. What happened to you matters.”