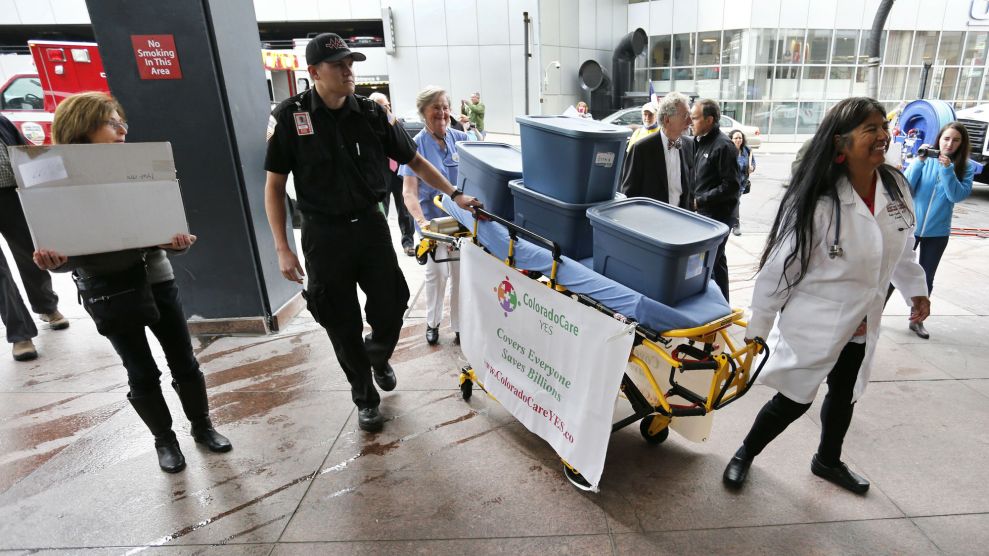 Sen. Irene Aguilar helps deliver more than 156,000 signatures to put ColoradoCare on the 2016 ballot, outside the offices of the Colorado Secretary of State in Denver on October 23, 2015.Brennan Linsley/AP Photo

This fall, Colorado voters are considering a measure that puts two progressive causes at odds.

Amendment 69, an ambitious undertaking by Sen. Irene Aguilar six years in the making that would create a single-payer universal health care system for the state, is finally on the ballot. There’s just one catch. In 1984, the state amended its constitution to ban the use of “public funds” for abortion: “No public funds shall be used by the State of Colorado, its agencies or political subdivisions, to pay or otherwise reimburse…any person, agency or facility for the performance of any induced abortion,” except when it’s necessary to prevent the death of the woman or unborn child in cases where every reasonable effort has been made to preserve the life of each.

According to the abortion rights organization NARAL Pro-Choice Colorado, because the new health care plan known as ColoradoCare would be a government subsidiary, NARAL believes it would be impossible for women enrolled in the program to be covered for abortions. Currently, if a Colorado resident has private health insurance, it’s likely that abortion procedures are included.

NARAL Pro-Choice Colorado came out against the measure in June, saying that despite the recent Supreme Court ruling that it’s unconstitutional to place an “undue burden” on a woman who is trying to get the procedure, there is no constitutional obligation to fund those services. “State restrictions on use of state public funds to provide abortion services have uniformly been upheld,” NARAL Pro-Choice Colorado said in a statement. “Unfortunately, Colo. Const. art. V, sec. 50 contains such a restriction, and Amendment 69 does nothing to change that.”

Colorado has long been a progressive state when it comes to reproductive rights—a state program that provides long-acting reversible contraception to low-income women saved the state millions of dollars in Medicaid costs and caused the abortion rate to plummet. The state also has minimal restrictions on abortion.

But proponents of ColoradoCare note that this is not a choice between single-payer insurance and abortion. “The amendment provides for the ability to cover a necessary medical treatment, and abortion would fall into that category,” said Owen Perkins, a spokesman for ColoradoCareYES. The group’s constitutional lawyer wrote a memo arguing that since Amendment 69 is in conflict with the 1984 amendment, the newest law would have priority over the older one because it better reflects the current desires of the constituency.

“The general rule is that where an apparent conflict exists between two statutes, the courts must attempt to harmonize them to effectuate the intent of the general assembly,” the memo reads. “If the two cannot be harmonized, the statute enacted last in time controls.”

But according to NARAL, the two measures are not in conflict. Abortion isn’t explicitly mentioned in Amendment 69, so the two laws would simply coexist, and abortion would not be covered.

Karen Middleton, executive director for NARAL Pro-Choice Colorado, explains ColoradoCare’s “attorney suggests it would be overturned because it was 30-plus years ago or because their definition of universal care might want to include abortion. But unfortunately, we’re not willing to take that risk.” She says the Colorado Supreme Court has typically not decided in favor of the argument that the more recent statute overrides the “less recent.” In fact, the more specific the law, the more likely it is to be upheld. The 1984 law is very specific.

Middleton refers to the omission of abortion coverage as a “fatal flaw” in Amendment 69. While she is very committed to overturning the 1984 amendment, ballot measures are expensive, and NARAL doesn’t have the resources to take it on at present.

Aguilar, a medical doctor who specialized in internal medicine, agrees universal care should include abortion; she’s worked before with NARAL and Planned Parenthood on legislative issues and she identifies as pro-choice. But this time, “it never crossed my mind,” Aguilar said. “I felt like it would have been nice if in the six years I’d been working on this it had been brought to my attention.”

Aguilar also says the controversy is overshadowing all the good things ColoradoCare would do for women’s health in the state. “Don’t let the perfect be the enemy of the good,” she insisted. Aguilar claimed that ColoradoCare would provide insurance for the 350,000 residents who aren’t covered; 500,000 women would have coverage for reproductive health care; only 12 percent of women pay for abortion with insurance anyway.

If the measure passes, it wouldn’t be women seeking early medication abortions who would feel the most financial impact—it would be women who need late-term abortions, possibly in the face of a fetal anomaly. The 1984 amendment does have an exception for cases where the life of the mother is endangered, but if that’s not an issue and if there’s nothing to be done about the fetal anomaly, the woman could be forced to wait and deliver.

“I just heard from someone who at 22 weeks just learned her pregnancy is incompatible with life,” Middleton said. “It’s devastating, and it’s a $10,000 procedure. To say that we’ll just figure it out is not realistic. It shows me that we need to do more to educate why abortion care is part of women’s health care.”

All in all, everyone wants the same thing. Both parties support universal health care and insurance coverage for abortion. But whether that’s possible with the current amendment remains unclear.

“Universal care includes abortion care,” Middleton said, “or it is not universal.”