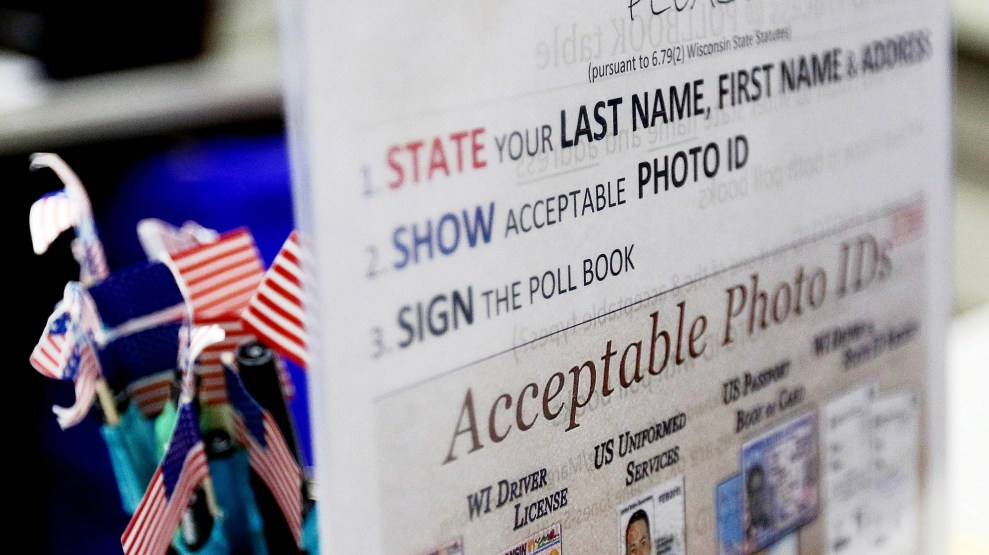 Instructions about the absentee voting process and "Acceptable Photo IDs" are posted on the front counter of the City of Eau Claire (Wisconsin) Elections Office in March.Marisa Wojcik/AP

Wisconsin voters will likely vote this November under the state’s strict voter ID law after a federal appeals court struck down a trial court’s ruling that would have allowed voters to cast ballots without identification.

In Wednesday’s ruling, a three-judge panel from the 7th Circuit Court of Appeals concluded that the trial court’s decision would likely be reversed on appeal. The lower court ruled on July 19 that election officials had to let people vote without ID if they signed a form saying they had problems getting proper documents.

The trial court’s ruling, in turn, came in response to an appeals court ruling in April finding that the state’s 2011 voter ID law would likely prevent people from voting who had legitimate difficulties obtaining documentation to get IDs, and it tasked the trial court with coming up with a method to help those people. That method was the affidavit, which the appeals court ruled Wednesday wasn’t targeted enough, according to the Milwaukee Journal Sentinel.

“Instead of attempting to identify these voters, or to identify the kinds of situations in which the state’s procedures fall short, the district court issued an injunction that permits any registered voter to declare by affidavit that reasonable effort would not produce a photo ID—even if the voter has never tried to secure one, and even if by objective standards the effort needed would be reasonable (and would succeed),” the appeals court judges wrote, adding that the trial court judge did not attempt to distinguish between genuine difficulties voters might have in obtaining the proper documents and “any given voter’s unwillingness to make the effort that the Supreme Court has held that a state can require.”

Rick Hasen, an elections expert at the University of California-Irvine, wrote Wednesday that the ACLU, which originally brought this case, might appeal the case to the full 7th Circuit Court of Appeals. But the practical effect of the ruling, he noted, is that the strict voter ID law will be in place for November. The ACLU could also appeal Wednesday’s ruling to the Supreme Court.

Dale Ho, the director of the ACLU’s Voting Rights Project, says he is disappointed that the judges “removed a safety net for voters after earlier this year holding that such a safety net would be appropriate. Their decision will guarantee disenfranchisement of many Wisconsonites in this fall’s election.”

Ho says the ACLU is evaluating its options, but that an appeal to either the full 7th Circuit or the Supreme Court will happen soon.

Wisconsin Gov. Scott Walker, a Republican, said in a statement that Wednesday’s ruling was “a step in the right direction” and that his administration would “continue to work to make it easy to vote and hard to cheat.”

A separate case challenged the 2011 voter ID law and other voter restrictions put in place by Wisconsin Republicans, including limits on early voting and on college students’ ability to register to vote. A federal district judge struck down those provisions on July 29, but its ruling on voter ID affected the ways in which voters can obtain a voter ID. The case is still awaiting appeal. Wednesday’s ruling, for its part, addressed what happens when voters get to the polls without an ID.

This story has been updated with comments from Dale Ho.