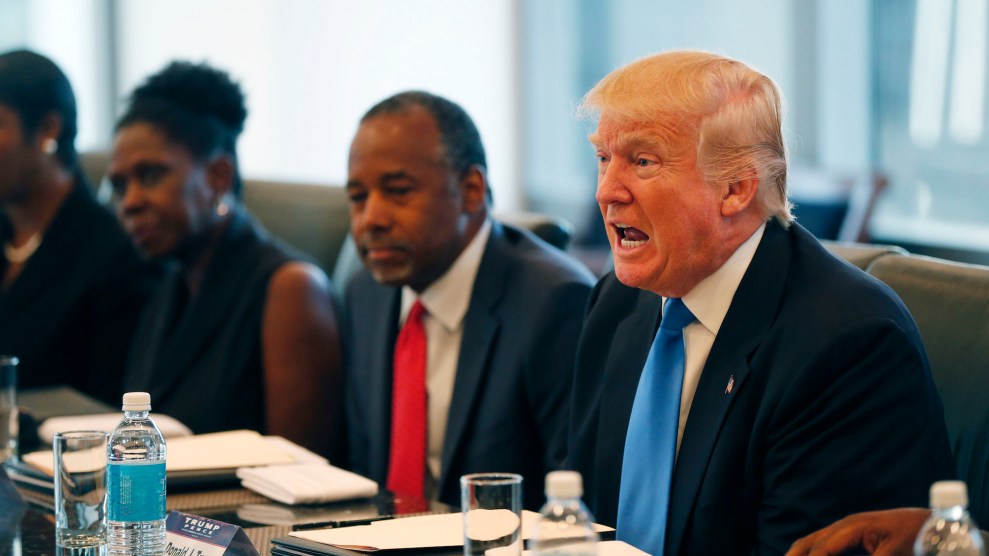 In another harsh attack on his opponent, Donald Trump at a New Hampshire rally on Thursday accused Hillary Clinton of running a “vast criminal enterprise” that was worse than Watergate, alleging that the Clinton Foundation was part of some sort of pay-to-play scheme while Clinton was secretary of state. Trump did not cite any evidence as he repeated this hyperbolic charge and his supporters shouted “lock her up.” Moreover, Trump did not mention that his own foundation donated at least $110,000 to the Clinton Foundation.

As has been reported by the Washington Post‘s David Fahrenthold, who has closely investigated Trump’s charitable donations, the Donald J. Trump Foundation gave two gifts to the Clinton Foundation in 2009 and 2010. The foundation donated $100,000 in 2009 and then reserved a table at a Clinton Foundation gala for $10,000 the next year. Fahrenthold pointed out that although almost none of the Trump Foundation’s money came from Trump himself—the billionaire has donated less than 1 percent of the money received by the foundation since 2007, and he apparently hasn’t given it any money since 2008—he still controls decisions regarding the Trump Foundation’s disbursements.

Trump has sharply attacked Clinton and her foundation all week after the Associated Press published a story on Monday night that reported that at at least 85 Clinton Foundation donors had met with Clinton when she was secretary of state. Right-wing Clinton critics have long charged that Clinton illegally gave special access and political favors to foundation donors, and Trump and his supporters seized on the AP story as evidence of corruption. “What is being uncovered now is one of the most shocking political scandals in American history,” Trump said on Thursday. “A secretary of state sold her office to corporations and foreign governments, betraying the public trust.”

But the AP was criticized for stoking controversy but failing to provide any actual evidence that influence peddling took place while Clinton was in office. The Washington Post editorial board noted that the story “does not show or imply corruption stemming from the relationship between Ms. Clinton and the Clinton Foundation. In fact, emails to and from Clinton confidante Huma Abedin show that access-seekers associated with the foundation often were rebuffed.” The Clinton campaign also responded angrily to the story, calling it “utterly flawed” for focusing only on 154 visits by nongovernmental figures and not mentioning that Clinton conducted hundreds of other meetings with government officials during her time in office.

Yet Trump has continued to push the Clinton-is-a-criminal meme. Throughout his rant against Clinton, though, Trump did not answer this obvious question: If the Clinton Foundation was an illegal pay-to-play enterprise, what did he get for his donation?