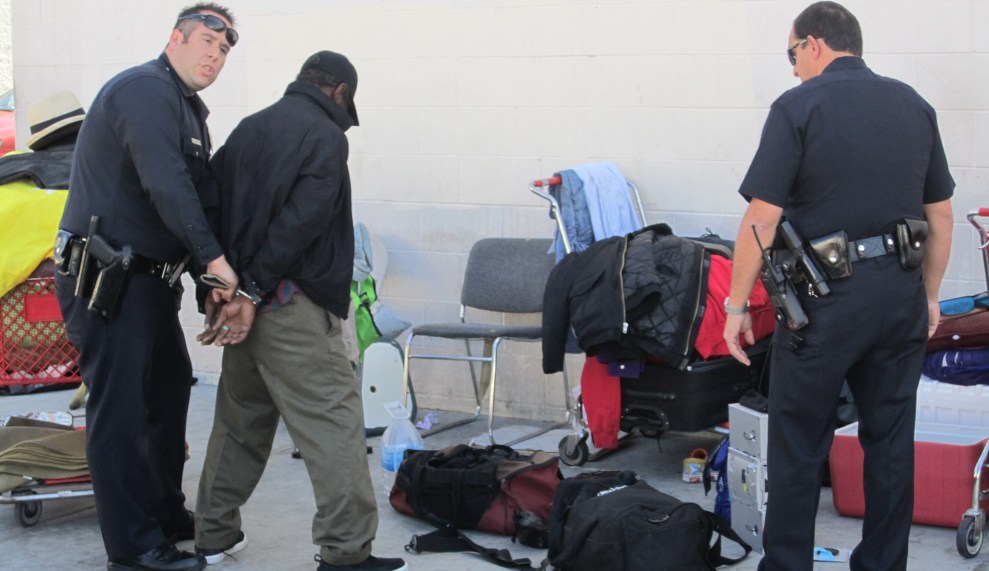 University of Chicago sociologist Forrest Stuart spent five years hanging out on Los Angeles’s grittiest streets for his new book, Down, Out and Under Arrest: Policing and Everyday Life in Skid Row. (For a taste, read this short excerpt.) “I figured this was ground zero for trying to start over, for testing the American bootstraps story, and I wanted to see if and how it could work,” Stuart explains. I spoke with the young assistant professor about the things he learned amid the street people and cops. 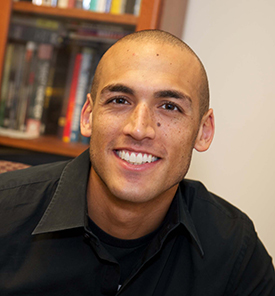 Mother Jones: Why did you choose Skid Row?

Forrest Stuart: I had worked with prisoner advocacy groups and in minimum-security prisons. I’d meet guys who would be released at 5 a.m. with no food, no nothing. If I were a guy who needed food or an addict who hadn’t had any treatment in prison, I would do whatever I had to do to survive, and maybe that would mean something illegal. So how do you start again? I had heard that the 50 blocks of its Skid Row was the place with the most parolees in the country, a neighborhood that is simultaneously one of the poorest and most aggressively policed locations in America. Shuttles run between Skid Row and LA’s Central Jail. I started by sitting in the courtyards, standing on the corners, hoping that people would strike up conversations. I started selling loose cigarettes, and people finally began talking to me.

MJ: What struck you during your time on the streets that might be useful to policymakers?

FS: Right away I started seeing how the police, in part just because of their numbers in Skid Row, were creating a situation I’d never seen before. Just as a guy was starting to get on his feet—for example, he had finally secured a bed at a shelter—some small infraction would cut him back.

“The places that people need most—like a soup kitchen or homeless shelter—become really risky, because that’s where the police are.”

It could be as little as getting a single ticket for loitering. For people living on dollars at day, to suddenly have to pay $150 for a sidewalk ticket is huge! If they don’t pay, they can be arrested. Not only do they have to spend time in jail, they usually lose their bed at the shelter or their room in low-rent apartments. In a lot of shelters or apartments, if someone doesn’t show up at the end of the day, the managers give away all their things. So now they’d be right back to square one. Broke, homeless, just trying to get a roof over their head. The bootstraps were cut.

For someone like you or me, you get a ticket, you pay it, it sucks. That ticket can mean we can’t have a drink tonight, or we have to cut back at the grocery store. Our interactions with police and the criminal justice system are generally just a nuisance. But once you go below a certain socioeconomic status, these seemingly trivial, mundane, momentary interactions with the police restructure everything.

The other really important complication is that some of the places that people need most—like a soup kitchen or homeless shelter—become really risky, because that’s where the police are, giving tickets and making arrests for small things like blocking the sidewalk. So people start to actively avoid those places. If the police are stopping and questioning you about, say, loitering, or not having ID, or for talking to a stranger (who happens to be the person handing out sandwiches) and you get hauled off to the station, you start to change your behavior for the worse. You start to avoid or refuse services.

FS: We can think about inequality as income and wealth. But there are a whole host of other things that you don’t see unless you are standing there watching it for a long time. When cities use misdemeanor arrests in low-income communities as a corrective, what they don’t understand is that these policies constrict every decision that someone with so few options has to make.

“Most of the residents’ cognitive energy is directed to two things: ‘How do I stay off the cops radar, and how do I stay safe?'”

When I step out of my house, I think about what I might be teaching that day or what I’m going to have for dinner. In Skid Row most of the residents’ cognitive energy is directed to two things: “How do I stay off the cops’ radar, and how do I stay safe—how do I avoid becoming a victim today?” Essentially, what people have to think about all the time is, “How do I prove to police that I’m not a bad person? How can I be sure I don’t look like an addict?” (Don’t pick at your clothes, don’t pick at your skin, don’t scratch your head.) It’s an incredible amount for a person to take in. It makes it really hard to concentrate on everyday things—like being a good employee if you do have a job, or pulling off a job interview.

Those of us in the middle class aren’t sitting on the sidewalk because we don’t have to, or we have a job or a home to go to. Plus, even if most of us did sit down on the sidewalk or walk down the street picking at our clothes, we aren’t going to get that ticket. Those policies amount to a double criminalization of poverty.

MJ: What assumption do most people have that should be corrected?

FS: That everyone, or at least the majority of the people, have something wrong with them. Something that the rest of us don’t have—mental health problems, addiction, poor choices, work ethic. But that isn’t true. I’m 100 percent confident that if some of the stuff that happened to them had happened to me, my family or my students or my greater community could help me. There is very likely no way I’m going to end up on Skid Row because I have so many safety nets. But take away your family and your supportive networks, and we are all one step away.

MJ: The mayor of LA says he’s serious about change. Do you agree?

FS: Mayor [Eric] Garcetti says, “We are going to spend money,” yet they don’t really have the money. That said, he has publicly committed to using the Housing First model. That should mean the administration increases transitional and permanent supportive housing. Getting people into homes has shown to work better than anything else so far. And it’s a lot better than the current system, which is to rely heavily on emergency shelters that have been turned into rehabilitation centers. If he follows through, that is a sign Garcetti might be serious.

“Cops don’t want to be walking around in piss and shit and dealing with mentally ill people.”

But overall I’m scared and pessimistic because the city’s history, and Garcetti’s history, shows that whenever they increase funding for social services, they tie it to more-aggressive policing. When that happens, we start hearing city official and police officers saying things like, “There’s no excuse for you to be here, homeless, jobless, because all of you can walk across the street for social service,” or “There’s something wrong with you,” or “You are criminally negligent.” There are a whole lot of reasons why people don’t go into services. A lot of people see services and police as one and the same.

We need to stop treating homelessness as a policing and criminal justice problem. We need to let the police do other stuff, and entrust social workers and helpers to address the issues. These are jobs cops don’t want to do. They don’t want to be walking around in piss and shit and dealing with mentally ill people.

MJ: In your book excerpt that accompanies this interview, you write about Jackson and Leticia, a couple who found themselves on Skid Row and addicted to drugs after LA’s aerospace industry collapsed. Have you seen them since?

FS: Last time I saw Jackson was two years ago. He was in the soup kitchen. He told me that the cops started cracking down hard on the vendors. In the hope of avoiding the cops, the vendors had started to focus on only selling DVDs rather than an assortment of items. They amassed duffel bags full of films, thinking that it would make their sidewalk shops more discrete. But having more than 100 bootlegged DVDs means more fines and jail time. So the vendors started going away for longer periods. Almost overnight, the cops wiped out another way poor people were making ends meet. Despite cycling through jail again, Jackson had been able to stay relatively clean. Leticia was still on drugs, but the two had managed to start the application process for SSI and transitional housing. But I’m still worried for Jackson. He’s got a long, uphill climb ahead of him.