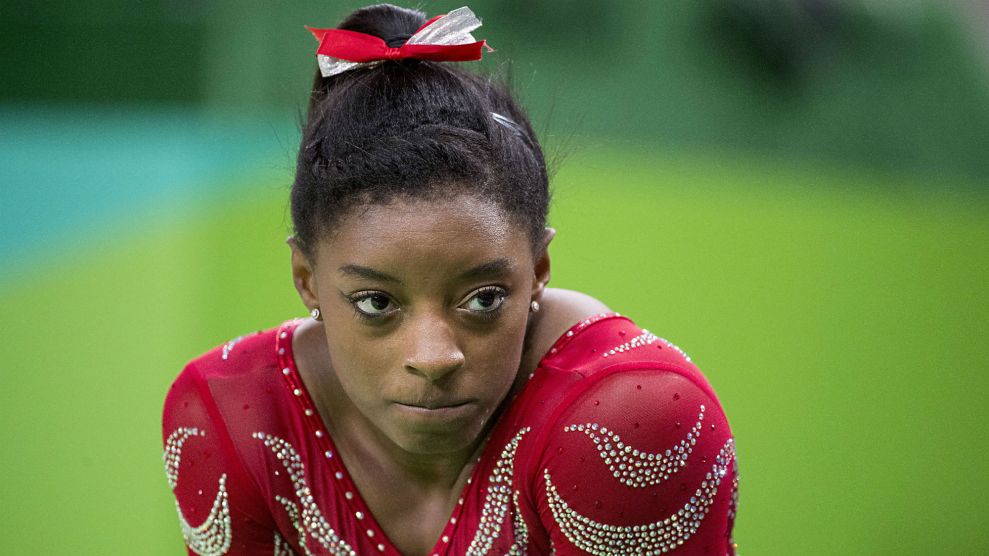 This year, an estimated 45 percent of athletes competing in Rio are female—the highest-ever percentage in any Olympic Games. So why are we still treating them like odd women out? Here are the five most egregious displays of sexism we’ve seen in Rio (so far):

The broadcasts are delayed for narrative, because we know what women want: At a July press conference, NBC marketing executive John Miller defended the decision to tape-delay the Olympics broadcast in the United States by saying the games’ core audience—women!—weren’t invested in the results. “The people who watch the Olympics are not particularly sports fans,” Miller said. “More women watch the games than men, and for the women, they’re less interested in the result and more interested in the journey. It’s sort of like the ultimate reality show and miniseries wrapped into one.”

Wife of totally anonymous football player wins bronze medal: In an effort to find its Olympics “hometown angle,” the Chicago Tribune fired off this misguided tweet:

The tweet refers to Corey Cogdell-Unrein, who won a bronze medal in trapshooting. It was her second—she also won bronze in the Beijing Games. But the tweet didn’t mention any of this—not her name or her event—just the fact that she’s married to Chicago Bears defensive end Mitch Unrein.

Hungarian swimmer shatters world record, thanks to her husband: On Saturday, Hungarian swimmer Katinka Hosszú won a gold medal and destroyed the world record for the 400-meter individual medley by more than two seconds. After the race, the camera immediately moved to the celebratory reaction of Hosszú’s coach and husband, Shane Tusup. “There’s the guy responsible for turning Katinka Hosszú, his wife, into a whole different swimmer,” NBC play-by-play announcer Dan Hicks said. (Here’s some context: Four years ago in London, Hosszú didn’t medal, and she married Tusup the following year after she asked him to be her coach. She’s been training hard under Tusup ever since, earning herself the moniker “Iron Lady.”) But as Deadspin pointed out, there have also been concerns among other swimmers regarding Tusup’s coaching methods.

Badass women athletes can only be the female version of Famous Dude X: Katie Ledecky is a 19-year-old two-time Olympic gold medalist and nine-time world champion who is such a beast that Grantland published an essay about her in 2014 titled “This Is Katie F—ing Ledecky: A Thesis About Kicking Ass.” Michael Phelps has called her a “stud.” But a Daily Mail headline simply called her “the female Michael Phelps,” instead of allowing Ledecky to rest on her own hard-earned laurels. The headline has since been revised, but the phrase is still used in the story, which bears a female byline. This sort of unimaginative labeling has been a problem before—in 2012, both Missy Franklin and Natalie Coughlin were called the “female Michael Phelps.” Even superstar gymnast Simone Biles has been called “the Kobe Bryant of gymnastics.”

But what do I know about sports? I’m just a woman who probably only watches reality TV.