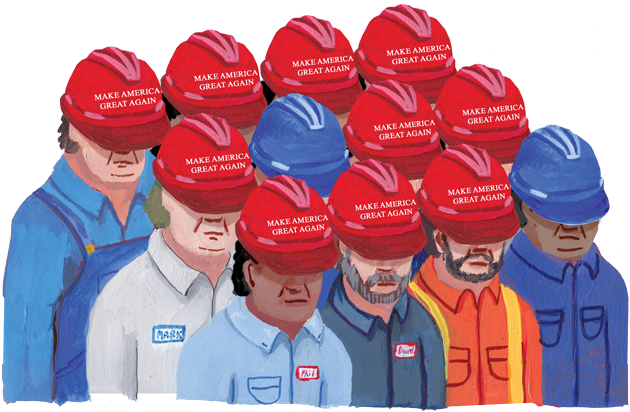 On a stormy morning in June, about a dozen union leaders dutifully filed into the back of the Yankee Kitchen restaurant, a homestyle diner outside Youngstown, Ohio, to come up with a strategy for defeating Donald Trump.

“You all know what happened in the primary, and that’s why I’ve called you all together,” David Betras, the local Democratic Party chairman, said as the men (and a couple of women) seated around several tables nodded. In March, Trump had lost the Ohio Republican primary to Gov. John Kasich, but here in Mahoning County he’d won by double digits. More than 6,000 Democrats and 21,000 independents had cast ballots in the Republican primary, which meant they were now all registered Republicans under Ohio’s election laws. Among the deserters were 18 local Democratic Party officials.

Betras was trying to jam his finger in the dike, hoping the area’s union leaders could persuade the rank and file that Hillary Clinton is the candidate to save places like Youngstown. It didn’t look to be an easy sell.

Trump’s anti-free-trade language “drew straight lines to our heart,” Roland “Butch” Taylor, a 58-year-old representative of the local Plumbers & Pipefitters union, interjected from across the table. “We’re all about the same age. We remember the heydays back in the 1970s when manufacturing was king. And it’s not that way now, and the only [reason] it isn’t is because of legislation coming from Washington, DC.”

Clinton has “gotta be strong, and she’s gotta be passionate about it,” Gary Carlile of the state teachers’ union added. “Because otherwise Trump is going to capture what have been Democratic Party issues. He’s a phenomenon.”

Taylor and Carlile are no Trump fans, and the national leaders of their unions are firmly for Clinton. But Trump’s “Make America Great Again” message is potent throughout the Rust Belt, particularly in places like Youngstown, where manufacturing’s exodus has left blue-collar decline and black urban poverty in its wake—a stew of racial and economic anxiety waiting to boil over. Trump’s promise to take them back in time is alluring.

Once known as Steel City, USA, Youngstown was in decline by the 1960s as foreign imports began to undercut the town’s mainstay. During the 1980s, the area lost more than 25,000 manufacturing jobs, poverty soared, and continuing mob violence earned the city a new moniker: Crimetown, USA. The evening before the meeting at the Yankee Kitchen, Betras took me on a tour of the once-bustling district along the Mahoning River where the skeletal remains of steel mills are discolored by rust and snaked by vines. “Where these trees are now, it all used to be mills,” Betras said, pointing to miles of desolate riverbank. “All these vacant lots here, these all used to be filled with bars and restaurants. That’s where the steelworkers, when they would get off, would come.”

Betras estimates that about 40 percent of workers in the Youngstown area are still union members. It’s the kind of place where folks register as Democrats at 18 because that’s what their parents and grandparents did before them.

The message Betras crafted to resonate with union members was simple: Trump is not a true populist, but an outsourcing billionaire who cares only about himself. As Betras later put it, “He’s just selling them a bill of shit.” He told the crowd in the diner, “Here’s the point you have to tell people: When Donald Trump had a choice to manufacture his products in the United States, he went overseas. So, you judge a man by his actions, not by his words. His actions are that he is a free trader.”

“The Trump phenomenon is something that’s been coming along for a long time. You guys have been ignoring this stuff.”

He continued, “Were those free-trade agreements horrible? Yes. But he took full advantage of them. He could have hired American workers, but he chose China over American workers. So I don’t want to hear this…When he comes in and starts talking about that, we need to tell people the true story about Donald Trump.”

Betras’ favorite example is Trump University, the real estate and wealth creation program over which Trump is being sued by former students. When Trump visits Rust Belt towns in his corporate jet and promises to bring back manufacturing jobs, he’s essentially saying, “I’m rich and I’m going to make you rich,” posited Betras. “Well, that’s what he did with Trump University. But all those people did was get ripped off.”

Betras is confident that voters will be swayed by his efforts to paint Trump as a phony populist. But one thing worries him: Trump’s uncanny resemblance to Youngstown’s working-class hero, former congressman James Traficant. To Betras, the similarities between the two men are “scary.” Traficant, who died in 2014 following a tractor accident, was a zealous populist with an outrageous hairdo. He had an anti-immigrant bent and was a longtime advocate of sending the military to patrol the border with Mexico. He regularly blasted the Washington establishment and was admired as the anti-politician politician. Traficant retained near-universal affection in Youngstown even after his mob ties led to a conviction for racketeering and tax fraud. He ran for a 10th term from his prison cell and still received almost 20 percent of the vote.

The public overlooked his obvious deficiencies “because he told the larger truth basically about the world—that all these trade agreements, the global economy, all had it in for workers like those in the Mahoning Valley,” says Paul Sracic, the chair of the political science department at Youngstown State University. The danger for Betras is that voters will feel the same way about Trump.

Betras’ strategy is based on the assumption that the Trump moment will pass and Republicans will return to being a party that promotes free trade. Sracic agrees that Mahoning is likely to revert to its dependably Democratic roots after the Trump phenomenon is finished. “I don’t think a lot of these people who are voting for Donald Trump see themselves as Republicans,” he says. “They associate the Republican Party as the party of the wealthy, and that’s not how they see themselves.”

But, he adds, if Trump succeeds in turning the GOP into an anti-trade, anti-Wall Street party, “well, then all bets are off.” As of mid-July, Trump had a 19-point lead over Clinton among non-college-educated Ohio whites. And while Rust Belt losses in the Electoral College might be offset by Sun Belt gains, one thing is for sure: Democrats can’t look at this part of the country as a “blue wall” any longer.

“I think the Trump phenomenon is something that’s been coming along in the Mahoning Valley for a long time,” said Rufus G. Hudson, a former Youngstown city council member who serves on the executive committee of the local Democratic Party. Hudson was alarmed at how well John McCain and Mitt Romney had performed in the once overwhelmingly Democratic county. He said he’d told Betras “that you guys have been ignoring this stuff. There’s been an undercurrent brewing for the last 10 years that you guys have totally ignored.”

After Betras left the diner, Patty Bowser stuck around. A public school employee, union organizer, and Democratic district leader, Bowser acknowledged the stylistic similarities between Traficant and Trump. But she said that even without his bombast and inscrutable coif, Trump would be winning over blue-collar voters with his nostalgic message.

“Trump—I think it could be anybody,” she said. “I think anybody coulda came in here, and if they could spew the right thing, they would have followed them.”