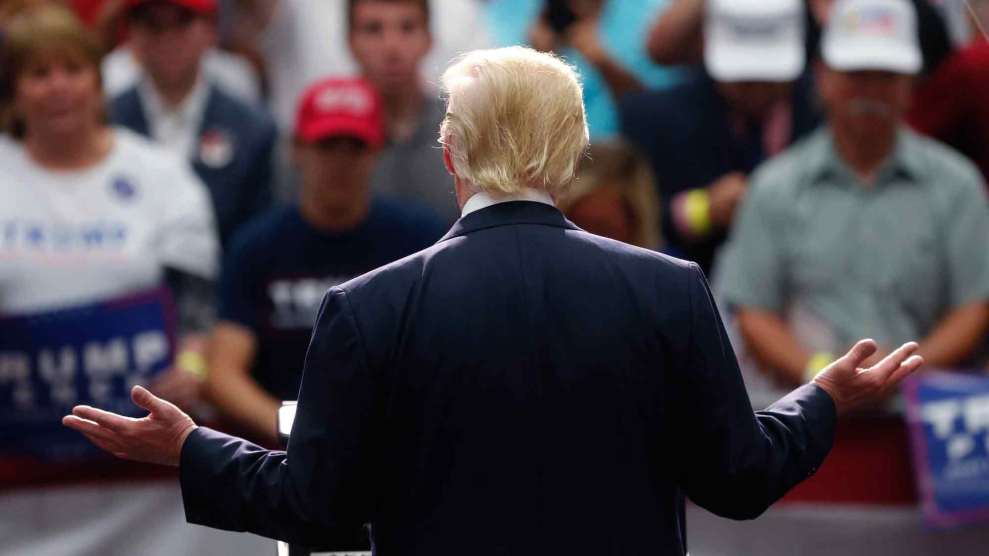 It’s one of those rules of politics that pundits love to cite: No Republican has ever won the presidency without carrying Ohio. And it does seem that this year, Donald Trump, the GOP nominee, would indeed need to bag the Buckeye State to have any shot at defeating Hillary Clinton. If Trump falls short in Ohio, he most likely will be done. This means there is a fellow in Ohio who could well have the power to determine the outcome of this election: John Kasich.

As Republican governor of Ohio, Kasich is the top GOPer in the state and holds much sway over the party machinery there. Consequently, Kasich, who is one of the many candidates Trump vanquished during the Republican presidential primaries, is in a position to thwart Trump’s presidential ambitions—or, at least, to take a stab at that. For now, though, Kasich has signaled, at least publicly, that he is not planning on actively blocking Trump’s path to the White House. But he’s also not helping Trump.

John Weaver, a top Kasich strategist, tells Mother Jones, “I told Paul Manafort before he left [the Trump campaign] that we would not throw marbles under their feet or get in the way as they try to build a campaign structure in the state.” And political operatives in the state within Democratic and Republican circles say Kasich has sent out a clear message: He won’t be assisting Trump, but he won’t get in Trump’s way.

Kasich’s hands-off approach is not surprising. He was critical of Trump throughout the nominating race, decrying Trump’s politics of insult and attack. He never endorsed Trump. He stayed away from the GOP convention in Cleveland, even though it was held in his own state. In July, the Kasich and Trump camps feuded over whether Trump had offered the veep slot to Kasich, with the Kasich crowd claiming that the Trump crew had said Kasich, were he to be Trump’s No. 2, would be in charge of foreign and domestic policy. Days later, Trump said he would probably finance a super-PAC to oppose Kasich in his next election (and ditto for Sen. Ted Cruz), and Kasich remarked that he doubted Trump could win Ohio in the general election.

With no love lost between Kasich and the mogul, the governor might not yearn to see Trump win his home state. Moreover, Kasich has indicated that he is interested (of course) in running for president again in 2020. This past weekend, he returned to New Hampshire to meet with his top supporters, advisers, and friends there. “This trip’s sparking more speculation that the two-term Ohio governor and former longtime congressman may run again for the White House in 2020 if Trump loses November’s presidential election,” a local news report said.

So a Trump loss in the general election would be beneficial for Kasich’s political career. But how much can Kasich influence the results this November in Ohio? Can a Republican presidential candidate win Ohio without direct backing and logistical support from the Republican governor?

“We’re going to find out,” Weaver says with a laugh. He notes that Kasich and his political operation will focus on the reelection campaign of Sen. Rob Portman, a Republican who is being challenged by Democrat Ted Strickland, a former Ohio governor.

“The only way we know how to win elections in Ohio is to have a positive and inclusive message and put a coalition together,” Weaver says. “It’s addition, not substitution.” And that’s not the Trump strategy. Weaver points out that Kasich won his last race with 26 percent of African American voters, 33 percent of African American males, 60 percent of women, and half of union household voters. (Kasich ran against a rather weak Democratic foe.)

Weaver notes that the Trump campaign in Ohio has gotten a late start at organizing a ground operation, with the Portman effort “light-years ahead.” Asked who will be the volunteer foot soldiers for the Trump campaign, Weaver replies, “Beats me.” He says Trump might have a tough time recruiting among the usual suspects, such as Republican women groups and college students. “When you have a 60 to 70 percent negative approval rating,” he says, “it’s hard to recruit volunteers.”

For its Ohio effort, the Trump campaign has hired Bob Paduchik, a veteran GOP operative who oversaw George W. Bush’s successful campaigns in Ohio in 2000 and 2004. Paduchik is highly regarded by Republicans. “He’s a smart guy who understands grassroots campaigns and who knows the state,” says Scott Jennings, a GOP strategist who ran the state for Mitt Romney’s 2012 presidential campaign. Paduchik, according to Jennings, realizes that Ohio consists of different regions that each require different campaign measures and messages. Paduchik headed Portman’s successful 2010 Senate campaign and might be able in the weeks ahead to forge productive ties with Portman’s current campaign.

Hiring Paduchik, Jennings says, “is one of the best possible things the Trump campaign could’ve done in any of the swing states.” But he adds that Paduchik’s job is akin to “building a fighter jet while taking off an aircraft carrier.” (In mid-August, Paduchik did get into a tussle with a Republican National Committee staffer working in Ohio, and the RNC had to pull the staffer out of the state.)

Can Paduchik succeed without Kasich’s assistance? Recent polls in Ohio have tended to show Trump trailing Clinton by 4 to 6 points, but the race there has generally appeared tighter than the national contest. (Romney lost to President Barack Obama by 3 points in 2012.) And some Republicans wonder just how much Kasich’s endorsement might be worth. With Trump running an outsider’s campaign and assailing the elites supposedly in charge of a rigged system, would a bear hug from the top politician of the state help greatly? The lack of support from Kasich may not be too significant. In 2012, some Republicans were ticked off at Kasich for not doing enough to help Romney. At the time, they complained that Kasich was talking up recent job growth in the state just as Romney was trying to convince voters that the Obama years had not been good for Ohioans. To some GOPers, it looked as if Kasich was undercutting Romney’s case and putting his own political priority (taking credit) ahead of the GOP national effort.

It’s possible that if Kasich continues to do nothing for Trump that his absence from the race won’t greatly change the political landscape from 2012. But might there come a time when Kasich will have to intervene directly if he does want to impede Trump? Should the race draw tighter, Kasich could find himself confronting the question of whether he ought to not just sit on the sidelines but take action to block Trump from winning all-important Ohio. (Ohio, though, might not decide the election. Had Romney won Ohio in 2012, he still would have lost the race.)

“There’s a lot a governor can do to get in the way,” says a GOP strategist who asked not to be named. “You can tell state party officials to stop cooperating with a campaign, tell donors to stop giving, tell operatives on the Trump campaign that if you want to have a future in the state to stop what you’re doing. Governors in states do have a lot of impact on the local people’s lives. And if you make your living in and around the political space, you have to care about what they want.”

For the moment, it seems as if Kasich can stand by and watch Trump lose on his own—and the governor could end up being well positioned for a 2020 run. But should Kasich have to intervene to help ensure a Trump defeat, there would be a risk for him. A Republican who does anything in 2016 that benefits Hillary Clinton might have a tough time explaining those moves to GOP voters in 2020. For Kasich, the decision to Trump-block might not be a slam dunk.

There are few politicians who have the potential to play such an outsize role in determining the 2016 presidential election as Kasich. He could probably sink Trump’s chances by preventing an Ohio victory for the reality show tycoon. If the race tightens there, Kasich will bear a weighty responsibility.