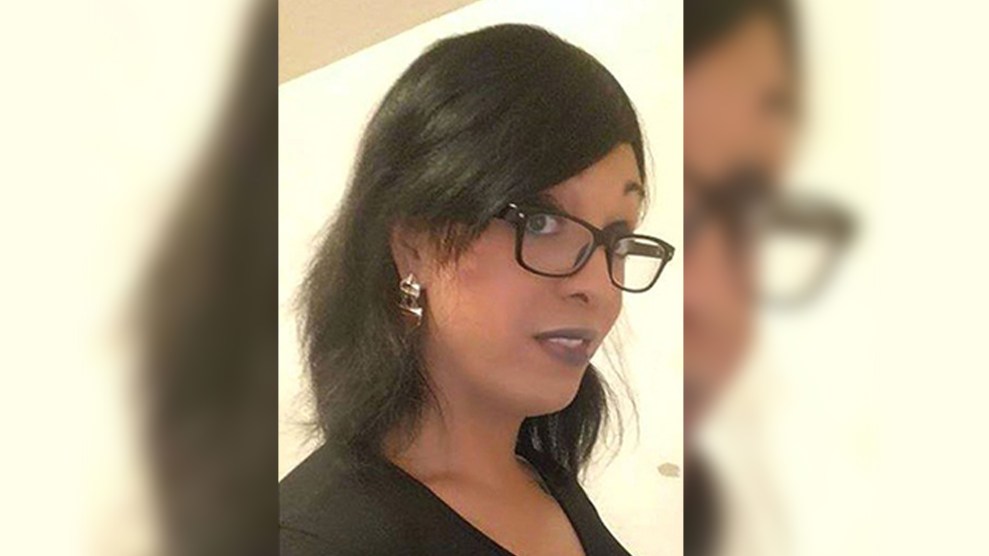 A transgender inmate at a local San Francisco jail just ended a dramatic two-month hunger strike in protest of her housing situation. Over the course of her strike, Athena Cadence lost 40 pounds and was sent to the hospital at least three times, according to trans rights advocates working on her behalf. On Wednesday, she was taken to the hospital after a judge ordered for her release from jail.

San Francisco County doesn’t house prisoners according to their gender identity. Instead, trans inmates are currently held together in a segregated area of a men’s facility, at least until the county decides how to handle their housing in the long term. Before going on hunger strike, Cadence said she had been mocked by inmates, deputies, and other staff for being transgender. She filed multiple grievance forms to express her frustration. But she says they did little to make the harassment stop.

When I visited her in July, 35 days into her hunger strike, Cadence was drained of energy. During her protest, she refused all solid foods, only consuming rehydration salts in water and vitamins, amounting to about 150 calories per day. She told me she couldn’t stand for more than a short period of time and spent most of her days napping. But her cheeks were still rosy and she spoke clearly. “Playing ball the way the sheriff’s department wanted to through paperwork and meetings wasn’t going to work,” she told me. “I didn’t feel like I had anything to lose.”

The vast majority of transgender inmates across the country are housed according to the gender they were assigned at birth, putting them at risk for abuse. In 2012, the Department of Justice instructed jails and prisons to give serious consideration to transgender inmates’ placement preferences—rather than just housing them according to their “genital status.” But those guidelines were rarely followed, according to the Marshall Project, a nonprofit news organization focused on criminal justice. So in March, the DOJ doubled down, releasing a new directive that again emphasized that any housing policy “must allow for housing by gender identity when appropriate.”

“I didn’t feel like I had anything to lose,” Cadence said.

For the past two years, the San Francisco Sheriff’s Department has been working with advocates on an updated policy that allows trans inmates to be housed according to their gender identity. In September 2015, the Sheriff’s Department announced that the new policy would be in place by the end of the year, and the city was heralded as a leader in the correctional community. But December came and went, and inmates continued to be held in a segregated wing of the downtown facility while the new sheriff, Vicki Hennessy, carried on drafting the policy.

According to Eileen Hirst, chief of staff for the San Francisco Sheriff’s Department, changing the way the jail handles trans inmates has been a priority from day one, but it’s more complex than it would seem. “There’s a tendency to think this is about putting trans women in women’s housing and trans men in men’s housing, and everything’s fine,” she says. “But it’s a lot more complicated. What needs to happen is a change in policy from the moment an individual walks in the door to be booked into custody.” New guidelines would need to address inmate classification, searches, and programming access—not just inmate housing.

Before she ended up in San Francisco County Jail, Cadence was a soldier in the Army. In 2006, she was deployed to Iraq, where she came out as trans to some of her fellow soldiers and presented as female off base. Even in the era of Don’t Ask, Don’t Tell, she described her gender identity as mostly a “nonissue” while she was enlisted.

But that wasn’t the case in the San Francisco County Jail. “Of course I’ve experienced some harassment before thism but never so violent,” she said of her experience there. Cadence said that even though trans inmates are held separately from the general population, they are often cat-called and harassed by male inmates in neighboring cells. “Men stare at us a lot,” she said. “They stare at us in bed.”

Being in a male detention area also meant being searched by male deputies. Cadence told me she’d been strip-searched by men four times since she arrived. That changed in June when Sheriff Hennessy ordered supervisors to first ask for a female volunteer to conduct a strip search if a trans inmate requests it. However, if no women deputies volunteer, the directive says the jail should stick to its current strip-search policy, which is based on “the genitalia of the individual.”

“Of course I’ve experienced some harassment before this but never so violent.”

Although the sheriff’s department says that housing trans inmates separately from the general population is meant to protect them from harassment by other inmates, Cadence said it didn’t protect them from harassment from staff. During a strip search, one staff member allegedly told her that she should chop off her genitals. In another incident, she says, a deputy bent her fingers backward so far that her knuckles turned black and blue. The Transgender Law Center, which has been representing her, says Cadence filed multiple complaints related to verbal harassment and misgendering by staffers. Hirst said she couldn’t comment on specifics but said that the jail is investigating Cadence’s claims “as we do any complaint from a prisoner.” The jail has also been working since last year on developing trans-awareness training for all members of the department.

Abuse of transgender inmates by staff members is a problem across the country, both in jails and in prisons. The Bureau of Justice Statistics found that between 2011 and 2012, about 18 percent of trans inmates experienced sexual victimization by jail staffers, compared with just over 2 percent of inmates in the general population. Transgender inmates who’ve been harassed are often placed in solitary confinement—which ends up being more like a form of punishment than a means of protection.

This week, Cadence’s hunger strike came to an end. On Tuesday, a judge determined that she had served enough time and ordered her released from the jail’s custody. The next morning, she was sent to the hospital to begin reintroducing food.

But the rest of the transgender inmates at SF County Jail remain in the men’s section of the facility. Last week, advocates sent a revised policy proposal back to the sheriff’s department for review. Hirst says she doesn’t know when the new housing policy will be finalized. Still, she expressed admiration for what Cadence has put herself through: “An individual who feels strongly enough about the issue to have a hunger strike, who is very committed, and who is seeking social change—that has to be respected.”