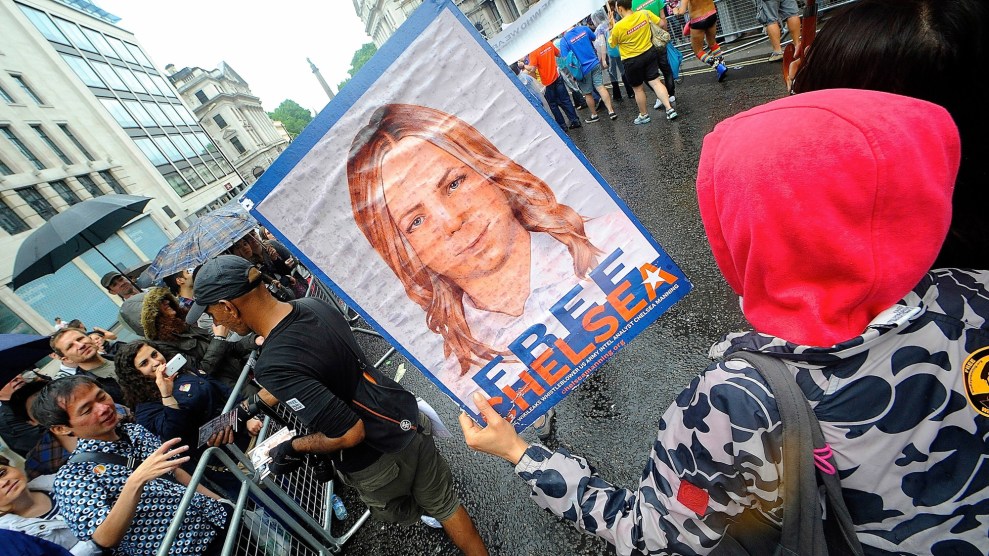 Chelsea Manning, the transgender Army whistleblower in prison for sharing classified documents with WikiLeaks, is fighting to avoid another stint in solitary confinement after trying to kill herself last month. The former soldier is facing a string of new charges related to the suicide attempt, and if she’s found guilty she could be put in indefinite isolation. On Wednesday, her supporters presented a petition to the secretary of the Army, with more than 115,000 signatures protesting the new charges. Here are five things to know about the escalating case:

The suicide attempt was likely related to gender dysphoria. After her arrest in 2010, the whistleblower formerly known as Bradley Manning was diagnosed with gender dysphoria, a condition of extreme distress that results when a person’s gender identity does not match his or her biological sex. Five years later, she started hormone therapy after suing the military for access to the medical treatment, but her lawyers say the Army has not taken other steps to treat her like a female prisoner. “She has identified her ongoing deterioration of her mental health state as stemming in particular from the continued refusal to adequately treat her gender dysphoria as an ongoing need,” her attorney Chase Strangio told reporters on a conference call Wednesday.

Regular forced haircuts reveal that Manning “is seen and treated as a man even though she’s a woman.”

Manning may be charged with resisting prison officials…while she was unconscious. On July 28, the Army announced it was considering filing three administrative charges in connection with the suicide attempt, among them an allegation that Manning had resisted “the force cell move team” during or after her suicide attempt, according to the official charge sheet. But Manning’s lawyers say their client could not have resisted because she was unconscious when officials found her in her cell at Fort Leavenworth detention center in Kansas. Her lawyers and the Army have not disclosed how she attempted to kill herself.

The other two charges involve “prohibited property” and “conduct which threatens.” Manning was authorized to have the property in question, her attorney Strangio said, but she allegedly used it in a prohibited way while attempting to take her life. It is unclear whether other prisoners at Fort Leavenworth would face similar administrative charges after a suicide attempt, or whether the “nature of the charges, and the aggressiveness with which they may be being pursued, is unique to her,” Strangio said. An Army spokesman could not immediately comment on the case.

The charges could result in indefinite solitary confinement. Though there’s no chance of her prison sentence being extended, Strangio said, the Army could increase the amount of time before Manning is eligible for parole. Despite the potentially severe consequences, her attorneys will be limited in the extent to which they can intervene. “These are administrative charges that are not going to go through the court marshal system, in all likelihood, unless something very different than usual happens,” Strangio said. And that means “she’s not entitled to counsel or other protections that might be afforded in a nonadministrative procedure.”

It wouldn’t be the first time Manning has been held in isolation. After she was arrested in 2010, Manning spent nearly a year in solitary confinement. A UN investigation into her isolation, which involved being forced to strip naked every night, described the situation as “cruel, inhuman, and degrading.” Last year, Manning was threatened with solitary confinement again after she was charged for violations including storing a tube of expired toothpaste in her cell and having a copy of Vanity Fair. More than 100,000 people signed a petition against those charges. Manning was found guilty but was not put in solitary; instead, she faced three weeks of restricted access to the gym, the library, and the outdoors.

She’s still fighting for medical care. Manning has a lawsuit pending over the military’s “ongoing refusal” to treat her “in accordance with the standards applied to other female prisoners,” Strangio said. In particular, Manning has been forced to have regular haircuts in prison, in accordance with standards applied only to male prisoners—a regular reminder, Strangio said, that “she is seen and treated as a man even though she’s a woman.” “The reality is,” Strangio said, “that she is not in a great place, and she is not getting the treatment that she needs.”