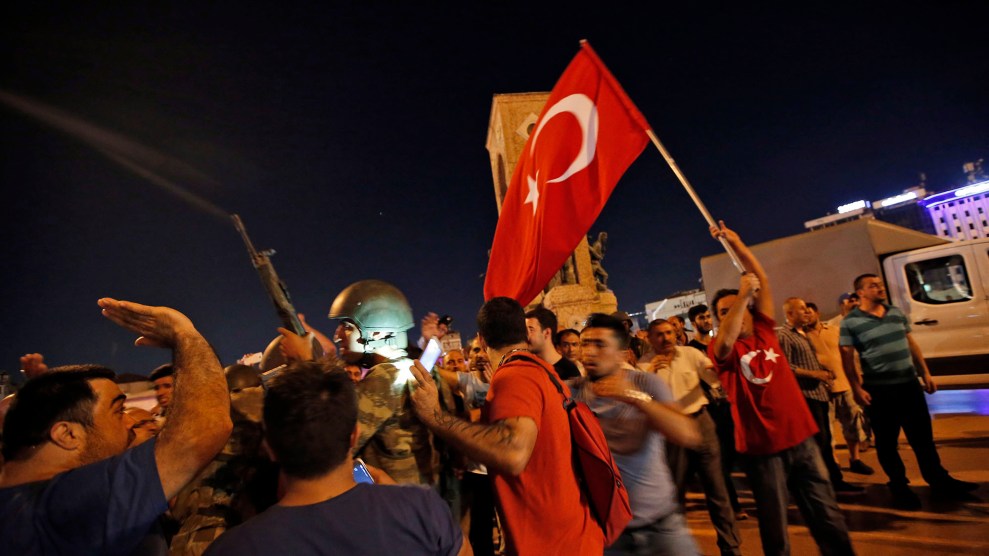 Update, July 16, 2:17 p.m. ET:  The death toll by Saturday morning rose to at least 265, with 1,440 people wounded, in the failed military coup in Turkey. The Turkish government has arrested thousands of military personnel thought to be involved.

On Saturday morning, Turkish President Recep Tayyip Erdo?an again placed blame on his former ally turned long-time rival, Fethullah Gulen, the 75-year-old Muslim cleric now living in the United States, and his loyalists embedded within the Turkish military. “You have engaged in enough treason against this nation,” said Erdo?an. “If you dare, come back to your country.”

Erdo?an called on the United States to extradite Gulen to Turkey “if the US is a strategic ally.”

Gulen denies the accusations. “I condemn, in the strongest terms, the attempted military coup in Turkey,” he wrote in a statement following the failed coup. “As someone who suffered under multiple military coups during the past five decades, it is especially insulting to be accused of having any link to such an attempt. I categorically deny such accusations.”

Meanwhile, Turkish authorities imposed a security lockdown on Incirlik Air Base in the southern province of Adana. It is home to 80 nuclear weapons and is used by the United States and other coalition nations as a vital launchpad for airstrikes targeting ISIS in Syria. All American military flights in and out of Incirlik have been grounded.

Update, July 15, 11:20 p.m. ET: At least 42 people have died in the attacks on Turkey’s capital, including 17 police officers killed in the helicopter attack on the police special forces headquarters, according to local agencies. There are also an unknown number of casualties from clashes in Istanbul.

Update, July 15, 9:30 p.m. ET: Turkish President Recep Tayyip Erdo?an, in an appearance on NTV from Ataturk airport in Istanbul early on Saturday morning, said that coup plotters loyal to his rival, the controversial Turkish preacher Fethullah Gulen, “will pay a heavy price for their treason.” Erdo?an blamed Gulen and his followers for the attempted coup, and added: “The Turkish armed forces must be cleansed. We have called them a terrorist organization, an armed organization, and that has now proven itself and they are using this nation’s arms to shoot at this nation.” (The Alliance for Shared Values, the group led by Fethullah Gulen, issued a statement condemning “any military intervention in domestic politics of Turkey.”)

Update, July 15, 8:31 p.m. ET: A bomb has hit Turkey’s parliamentary building, according to the Associated Press. According to an AFP photographer, Turkish military forces opened fire on crowds gathered at the entrance to Istanbul’s Bosphorus bridge.

Update, July 15, 7:32 p.m. ET: President Barack Obama and Secretary of State John Kerry have come out in support of Turkish President Recep Tayyip Erdo?an and the “democratically-elected Government of Turkey,” urging all parties to “show restraint, and avoid any violence or bloodshed.”

Update, July 15, 7:18 p.m. ET: Turkey’s state-run Anadolu Agency reported that 17 police officers have been killed in a helicopter attack on the police special forces headquarters on the outskirts of Ankara, according to the Associated Press.

Update, July 15, 6:58 p.m. ET: The leaders of a third opposition party, the left-wing People’s Democratic Party, or HDP, have also announced their opposition to the coup. “HDP is under all circumstances and as a matter of principle against all kinds of coups,” said the party’s co-chairs in a statement. The announcement is significant: The HDP was attacked and repressed by Erdo?an’s government after it won 13 percent of the vote in last summer’s parliamentary elections and blocked Erdo?an from changing the constitution to give himself more power.

Update, July 15, 6:37 p.m. ET: Supporters of Turkish President Recep Tayyip Erdo?an have responded to his call for people to gather in the streets to try to block the military’s coup attempt. Images and reports from Turkey show crowds gathering in public spaces like Istanbul’s Taksim Square and chanting against the military.

Update, July 15, 5:30 p.m. ET: Turkish President Recep Tayyip Erdo?an made a statement on Turkish TV stations urging supporters of him and his Freedom and Justice Party, known as the AKP, to take to the streets and gather at airports to resist the military coup. “I am commander in chief in this country,” he said. “Those who attempted a coup will pay the highest price.” In a surreal moment, Erdo?an delivered his speech via video chat, with TV anchors holding their phones up to the camera to broadcast his message.

It’s still unclear the military’s commanders authorized the coup or if the attempt was made by a smaller faction of the military. Turkish Prime Minister Binali Yildirim, speaking on Turkey’s NTV station, had said earlier on Friday afternoon that at least some Turkish military units were attempting a coup against the country’s civilian leadership, but insisted it was a “a group within the military” and downplayed the presence of soldiers in the streets of Istanbul.

Just minutes later, the military took over the airwaves, shutting down state broadcaster TRT and making its announcement. Several outlets also reported that the military has closed Istanbul’s Atatürk airport, with no flights currently leaving. Later, after the military’s takeover, Reuters reported that the “statement made on behalf of armed forces was not authorized by military command.”

Modern Turkey has a long history of military coups dating back to 1960. The Turkish military has typically acted as a guardian of the secular vision espoused by the country’s founder, Kemal Atatürk, and stepped in when it believed civilian governments were violating those principles. But under Prime Minister and now-President Recep Tayyip Erdo?an, religion has played a much larger role in Turkish public life and there had not been a coup attempt since 1997. Erdo?an has also attempted to consolidate power, cracking down heavily on journalists and protest movement while attempting to change the constitution to give his office more power. Erdo?an was reportedly on vacation when the coup attempt began.

Images and videos of Turkish military units in Istanbul blocking bridges to the city’s Asian side and apparently telling motorists to return to their homes began appearing on social media around 3:30 p.m. Eastern time on Friday.

Turkish soldiers block both bridges on the Bosphorus in Istanbul and jets flying low in Ankara. Reason not clear yet pic.twitter.com/tMG7KKYvGh

Other posts showed military jets were buzzing over the city at low altitude, and gunfire was reported.

Another video showing an extremely low fly-by of a jet as emergency lights flash in downtown #Ankara #Turkey. pic.twitter.com/AtILvQ5XZc

While there was at first confusion about whether the military presence was due to a terror alert or some other event, Yildirim said military units had attempted an uprising and would “pay the highest price.”