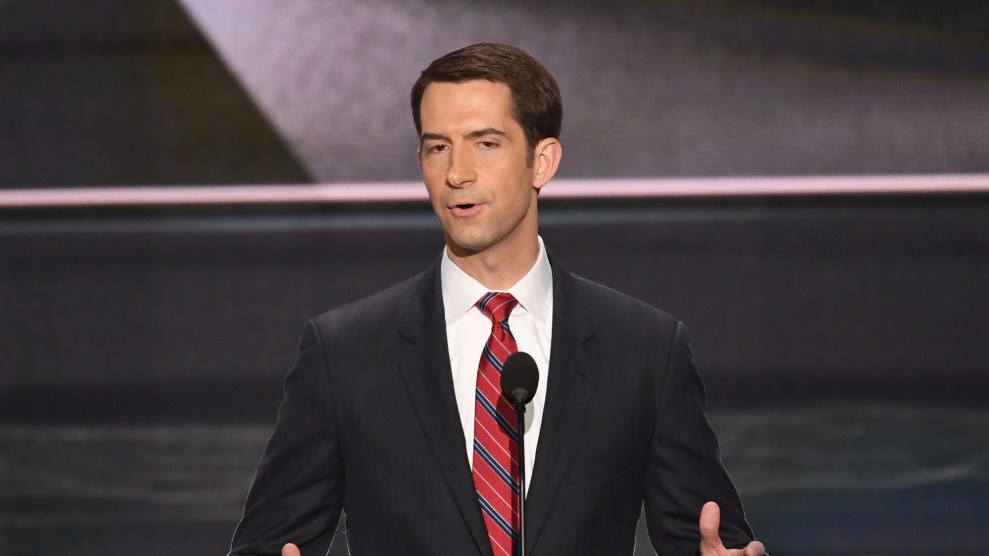 Sen. Tom Cotton of Arkansas, one of the Senate’s leading neoconservatives who has been bouncing around the Republican National Convention this week to build his reputation for a possible future presidential run, is still standing behind Donald Trump even after the Republican nominee told the New York Times last night that he wasn’t sure if he’d honor NATO’s charter. At a Thursday event hosted by Politico and billed as “The New Republican Foreign Policy at the RNC,” Cotton nervously dodged questions related to Trump’s isolationist views on foreign policy—views that are the exact opposite of Cotton’s main policy agenda.

Cotton initially said that he hadn’t read Trump’s interview and had just heard a few snippets. But he’d clearly caught the headlines, and he quietly rebuked the ideas Trump had laid out, calling NATO “the most successful security alliance” and saying, “We need to stand behind our Article 5 guarantee of NATO with every NATO member.” But whenever he was pressed about Trump’s statements to the contrary, Cotton sidestepped by saying that Hillary Clinton was worse because she was too closely tied to the current president. “We shouldn’t just think about Donald Trump’s words,” Cotton said. “We have to look at Barack Obama’s actions as well, and Hillary Clinton’s support for those actions.”

When asked about Trump’s frequent praise of Russian leader Vladimir Putin, Cotton instead chose to deride Obama for trying to reset the relationship with Russia early in his presidency—when Putin wasn’t president—and said that anything Trump says about Russia at the moment doesn’t count and would change once he gets more inside information. “I hope,” Cotton said, “that when Donald Trump begins to receive intelligence briefings of the nature that I’ve been reviewing for a year and a half on the intelligence committee, he might have a slightly different perspective on Vladimir Putin, because Vladimir Putin is not a friend of the United States.”

Cotton’s reluctance to criticize Trump over his NATO comments stood in contrast to the remarks of a speaker who preceded him. In the first part of the panel, before Cotton took the stage, Rep. Adam Kinzinger (R-Ill.) ripped into Trump. Kinzinger has refused to endorse Trump so far, and he said Trump’s comments on NATO were “disastrous” and pushed him further from the party’s presidential candidate. “Comments like this are not only ill-informed, they’re dangerous,” he said. “I’ve actually really, to be quite blunt, have wondered why Donald Trump and his team have been seemingly so pro-Russian.”

Kinzinger continually stressed that that even if Trump doesn’t end up in charge of US foreign policy, merely having a major presidential candidate question the country’s commitment to political allies could embolden countries like Russia to take a more aggressive position. “This is not Republicanism,” he said. “I was drawn to this party partially because of foreign policy—I agree with the other tenets. But what you see right now is a candidate for president who doesn’t understand the role of America, which is to be an example of self-governance for the billions of people who don’t have it.”