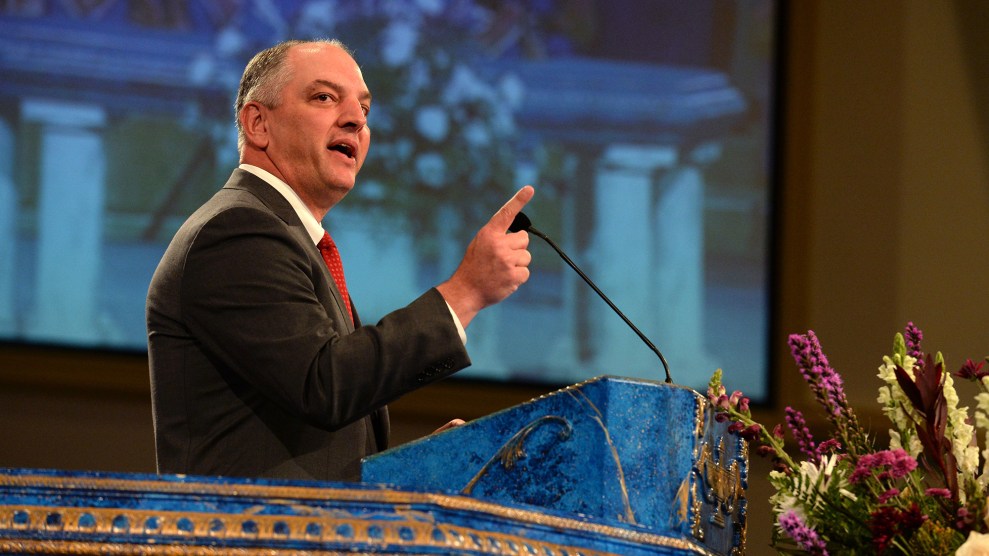 But the platform leaves one group out in the cold: pro-life Democrats.

On day three of the Democratic National Convention in Philadelphia, about 120 people gathered to munch on barbecue sliders and watch Democrats for Life—a small group that seeks to give Democrats who oppose abortion a voice in the party—grant its Governor Casey Whole Life Leadership Award to the pro-life Democratic governor of Louisiana, John Bel Edwards. The mood was dreary as the members contemplated their place in a party they believe has left them behind on this issue.

“It’s definitely frustrating,” said Christina Healy, a 24-year-old medical student from Cleveland. “It feels like we are being pushed out of the party, but not for a good reason.” Healy, a vegetarian sporting purple hair who is not registered with any party, is struggling to find a candidate whom she can support without violating her opposition to “aggressive violence across the board”—which she said extends from abortion to the death penalty, war, and torture. “I’m a huge Jill Stein fan,” she said, referring to the Green Party’s presidential candidate, “but I can’t violate my conscience because she’s so pro-abortion.”

A few people at the event were Hillary Clinton delegates who were balancing their pro-life convictions with their support for a nominee who is in line with the party’s move toward increasing access to abortion in recent years. “I think what the Democrats get right about this issue is we need to care about women’s health,” said Justin Giboney, a Clinton delegate from Atlanta. But he is wary of the party’s relationship with Planned Parenthood, whose president, Cecile Richards, spoke during prime-time Tuesday night, and described the platform as “reaching a point of irresponsibility.”

“It’s one thing to say sometimes it’s necessary,” Giboney said. “It’s another thing to say it’s a social good.” He believes that the party’s wholesale endorsement of abortion rights is alienating many church-going Democrats who are uncomfortable with the Democrat’s no-restrictions stance on a procedure they consider immoral.

This is the warning coming from the leaders of Democrats for Life. The group’s executive director, Kristen Day, gave a presentation in which she laid much of the blame for the Democratic Party’s losses after 2008 on its position on abortion. (She pointed to the loss of 69 House seats, 13 Senate seats, 912 state legislative seats, 30 state chambers, and 11 governorships.) One in three Democrats, she said, opposes abortion. “Democrats have become the party of the Northeast and the West Coast,” Day said. The answer to reviving the party in places like the South, she argued, is pro-life Democrats like Edwards. “I think Louisiana is the future of the party,” Day said. Though her group’s numbers are small—Democrats for Life has just a couple of people on staff and fewer than 10,000 on its listservs—Day argued that there are millions of voters who could be drawn into the Democratic tent if the party were less staunchly pro-choice.

Day’s analysis contradicts mainstream views from pollsters and pundits about what is ailing the Democratic Party. The south is broadly more conservative, and pollsters don’t feel that pro-life Democrats are one-issue voters. (Many people in the room said they’d remained in the Democratic Party because they agreed with Democrats on most other issues.) Additionally, Day’s presentation did not acknowledge broader, systemic challenges to Democrats. Politics in the South is divided along racial lines, and Democrats nationwide have a hard time turning out their base in off-year elections. Speaking of Edwards, whose pro-life stance likely did help him in his conservative state, Day did not acknowledge that a prostitution scandal involving Edwards’ opponent, Sen. David Vitter, and the deep unpopularity of the outgoing Republican governor, Bobby Jindal, played in role in Edwards’ victory.

This year, the Democratic Party’s platform calls for repealing both the Hyde Amendment, which prohibits Medicaid from funding abortions, and the Helms Amendment, which bars US foreign aid from funding the procedure. For decades, these amendments have represented a truce between pro-life and pro-choice camps on the issue of government funding of abortion, so abortion rights groups see the call for their repeal in the platform as a victory. Clinton, who eight years ago called for abortion to be “safe, legal, and rare,” has dropped the “rare” this election cycle. “She’s just saying ‘legal abortion,'” Day said with exasperation. She believes the goal of making abortion rare through better health care and safety net programs for pregnant women should be one area where pro-choice and pro-life Democrats can work together.

Accepting the group’s award, Edwards also argued that the position on abortion was damaging the party in the South—or at least hurting pro-life politicians like him. He noted that if the Democratic National Committee selects as its next leader someone who is very pro-choice, such as EMILY’s List president Stephanie Schriock, the prospects for pro-life Democratic candidates would diminish.

“On the abortion issue specifically, my opponent openly questioned my commitment to the issue, notwithstanding my voting record, because I supported Barack Obama to be president,” Edwards said. “He said, ‘You cannot do that and be pro-life too.’ Well, it’s going to be increasingly difficult to be able to navigate these waters if the party doesn’t moderate on this position.”