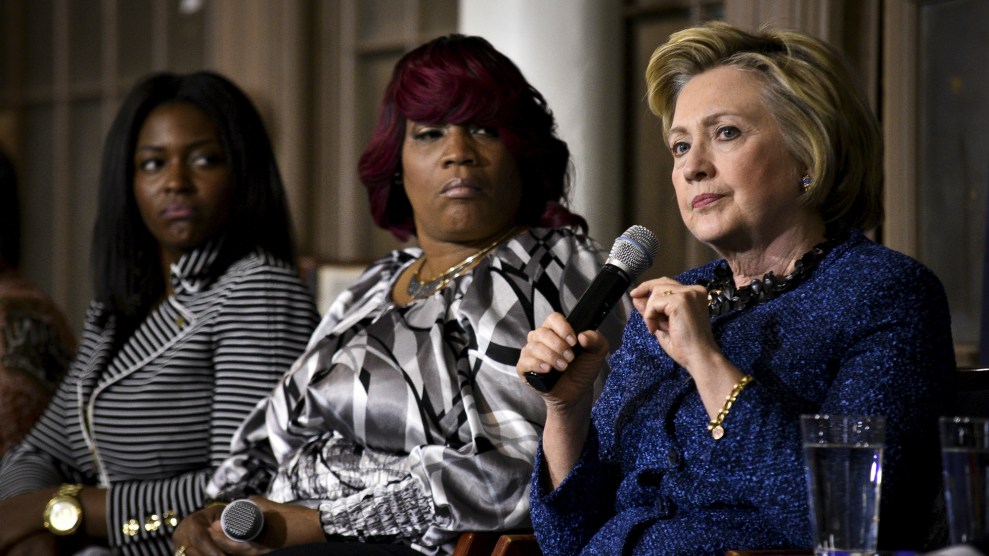 Bill Clinton’s anticipated speech Tuesday night introducing his wife as the Democratic presidential nominee could become a source of tension because of who will be speaking before him: a group of mothers who lost children to police violence in an epidemic that some activists say Clinton’s administration helped create with its tough-on-crime policies.

Tuesday’s session of the Democratic National Convention will feature an appearance from the “Mothers of the Movement.” These women include the mothers of black men and women who died in now-infamous cases of police violence—including Trayvon Martin, Michael Brown, and Sandra Bland—as well as a few who lost loved ones to gun violence. The women have become featured surrogates for the Hillary Clinton campaign in recent months, appearing with her at events and in campaign ads to discuss gun violence and the excessive use of force by law enforcement. Before appearing onstage on Tuesday, the women will be featured in a Clinton campaign video that will be shown at the convention.

The evening, which will focus on the theme of children and families, will also feature a speech from Bill Clinton, who has engaged in heated interactions with Black Lives Matter activists critical of the tough-on-crime policies that led to rapid prison growth, lengthened prison sentences, and intensified the war on drugs during his presidency. Hillary Clinton’s words of support for many of those policies, particularly her controversial “superpredators” comment, has landed her in hot water with activists who argue that she had a hand in creating the problems affecting communities of color today. The potential for tension between these speeches, and the philosophies behind them, could undermine Democrats’ efforts to achieve greater unity on Tuesday after a contentious start to the convention.

Tuesday night is expected to present a significant contrast with last week’s Republican convention, where a number of speakers, particularly Milwaukee sheriff and frequent Black Lives Matter critic David Clarke, had harsh words for racial justice activists. As he accepted the Republican nomination last Thursday, Donald Trump called for the restoration of a tough-on-crime approach to law enforcement, saying that “decades of progress made in bringing down crime are now being reversed,” a claim that seemed to misconstrue a steady decline in crime rates nationwide.

In a Tuesday morning interview with Good Morning America, the Mothers of the Movement said that they want to use their appearance at the DNC to address tensions over matters of race and policing that have intensified after the recent deaths of Philando Castile in Minneapolis and Alton Sterling in Baton Rouge during encounters with police officers, and the killing of police officers in Dallas and Baton Rouge in recent weeks. The women said they hope to use their stories to show how improvements in policing and a reduction in gun violence will be beneficial to both communities of color and the officers who serve them.

Last week, the Philadelphia Fraternal Order of Police slammed the DNC for failing to give the families of recently slain officers speaking time at the convention. “The Fraternal Order of Police is insulted and will not soon forget that the Democratic Party and Hillary Clinton are excluding the widows, and other family members of Police Officers killed in the line of duty who were victims of explicit, and not implied racism, and ‘being on duty in blue,'” union president John McNesby said in a statement. “It is sad that to win an election Mrs. Clinton must pander to the interests of people who do not know all the facts.”

The union later clarified that it was not upset at the speaking time given to the mothers but believed that those watching the convention “need to hear the impact of all and everyone that’s been victimized by crime.”

In response to the criticism, the Clinton campaign noted that law enforcement officers will speak at the convention. Joe Sweeney, a 9/11 first responder and former detective with the New York Police Department, will address the convention on Tuesday. Charles Ramsey, the former commissioner of the Philadelphia Police Department, will speak Wednesday.