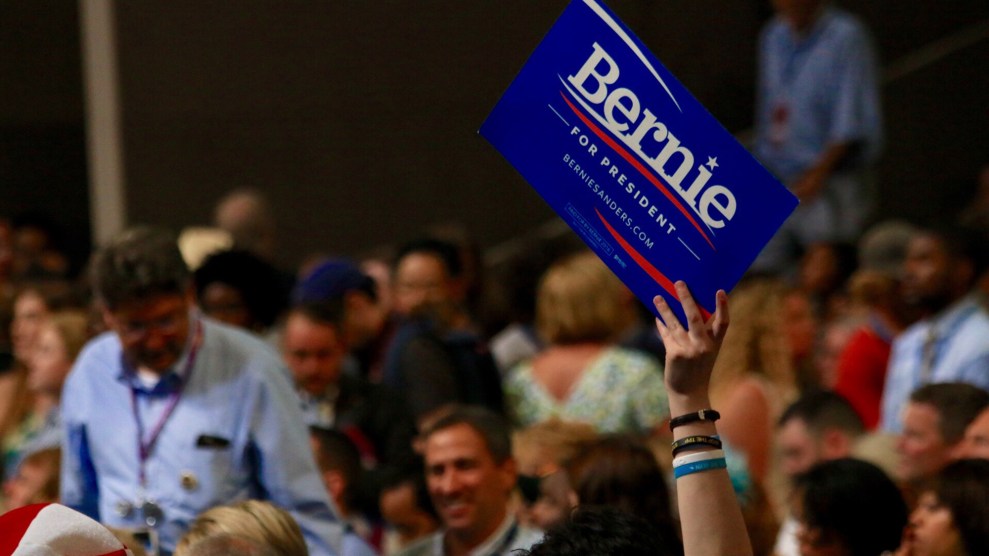 As the fractured Democratic National Convention gradually unified behind Hillary Clinton over the course of the week, Bernie Sanders’ frustrated supporters were left to wonder what was next for their would-be political revolution. An obscure political party thinks it has the answer.

Leaders of the Working Families Party, a progressive party backed by labor unions and community activists, were in Philadelphia this week to make the case to Sanders supporters that the WFP should carry the torch. Unlike the Green Party, whose presidential candidate, Jill Stein, has attracted some Sanders backers and threatens to draw votes away from Hillary Clinton and help Donald Trump, the WFP sees itself as a complement to the Democratic Party, working to pull the party to the left.

“We are not the Green Party,” said Dan Cantor, WFP’s national director, shortly after arriving in Philadelphia on Monday. “We are not running noble but doomed people. We are trying to win Democratic primaries. We want to replace bad, corporate, or inert Democrats with progressives, and then we work to defeat Republicans.”

WFP officials took part in multiple panels set up by the Sanders campaign in Philadelphia for Sanders delegates and supporters. On Tuesday, the party held an event for delegates interested in organizing WFP chapters in their home states and cities. Dubbed “The Working Families Party and the Next Phase of the Political Revolution,” the event drew more than 200 attendees, including many Sanders delegates. (There are currently WFP operations in 13 states.) The WFP threw a party that evening; more than 400 people attended.

Cantor describes his group as the antidote to the now-defunct Democratic Leadership Council, the group of centrist Democrats who emerged in the 1980s to pull the party toward the middle of the political spectrum. “They totally transformed the Democratic Party in ways that we’re still paying for,” he said. “We’re trying to yank the Democrats in a progressive direction.”

But there’s a key difference between the DLC and the WFP: The latter is actually a separate political party, with field organizing, candidate recruitment, and a party platform. Sometimes it helps Democrats—its organizing helped Connecticut’s Democratic governor, Dannel Malloy, fend off a tough Republican challenger in 2014, for example. But at other times, some Democrats are less appreciative of its efforts. The party’s support for Sanders is a prime example of this dynamic. The WFP angered many Democrats this election cycle when it endorsed Sanders and then worked hard to give him a primary victory in Clinton’s adopted home state of New York, where the WFP has its biggest operation. The party put its impressive political organization to work for the Vermont senator, giving him a fighting chance in a state where the political climate favored Clinton. (Clinton ultimately won with 58 percent of the vote.)

Now that Clinton is the nominee, the WFP wants to put the primary behind it. “It’s important for [Sanders] to point out the stakes in this election and for progressives like us to make the argument that the best way to continue the ambitions of the Sanders movement is to elect Clinton so we have more favorable terrain to fight on,” Cantor said. “If Trump is president, it’s all defense all the time.” In the next few weeks, the party will likely endorse Clinton.

Unlike many of Sanders’ supporters in Philadelphia this week, Cantor was not upset by Clinton’s selection of Tim Kaine, who is considered a moderate Democrat, as her running mate. “Virginia is kind of important, so that’s not a stupid calculation,” he said. “I mean, the first rule of politics is you have to win.”

For Cantor, the primary was the time to dream big, and now is the time to achieve what he calls “the left wing of the possible.” Under a Trump presidency, he said, key WFP goals such as a $15 national minimum wage and massive investments to combat climate change would become impossible.

The WFP’s biggest successes so far have come in New York, where the party was founded in 1998. It has helped elect not only a progressive New York city council, but also the city’s mayor, Bill de Blasio, who keynoted the party’s panel on Tuesday. The WFP is active through much of New York state, but in other states, the chapters often work at a hyper-local level. Sanders’ campaign, says WFP spokesman Joe Dinkin, has caused a “major spike” in interest in the WFP among former Sanders campaign volunteers and progressive community leaders. “We get calls every day” from people asking how to set up a local WFP chapter, says Dinkin.

In Philadelphia, a vocal minority of Sanders supporters refused to back Clinton or to embrace the pragmatism that the WFP’s leaders are now preaching. But the WFP thinks it presents one of the most viable ways forward for a movement that, without guidance and infrastructure, could quickly lose steam as it moves past Sanders’ candidacy and on to the many issues he championed. Party officials believe they can offer the tools and training to continue to campaign for progressive candidates and pull the Democrats to the left. And for the WFP itself, the Sanders revolution represents a huge political movement that could lend substantial heft to the party’s heretofore modest undertakings. If, that is, the WFP can successfully pitch itself to Sanders fans as the right vehicle for their movement.