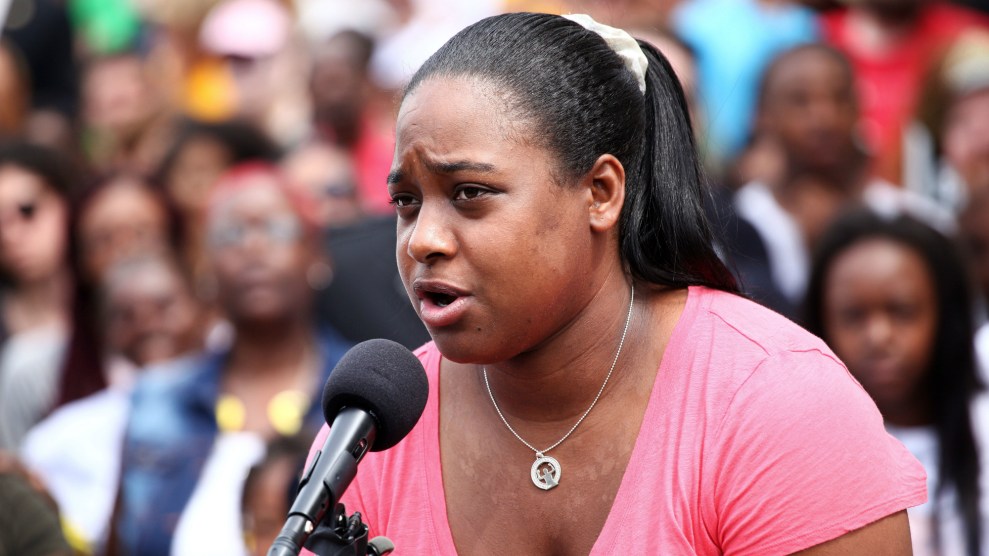 A town hall with President Barack Obama on Thursday became embroiled in controversy when the daughter of Eric Garner, an unarmed black man killed during an encounter with New York police officers in 2014, claimed that she wasn’t allowed to ask the president a question after being promised she would have the opportunity.

ABC News broadcast the town hall on race relations on Thursday evening, but taped it earlier in the day. As taping finished, Garner’s oldest daughter, Erica, shouted that she had been “railroaded,” according to reports from USA Today and BuzzFeed.

Reporters were not allowed inside the taping, but several journalists outside of the studio confirmed that Garner was visibly upset.

A bizarre scene at the taping of tonight’s #POTUStownhall: Erica Garner shouting within earshot of Obama that she didn’t get a question in.

Saying they were “pimped for ratings”, Erica Garner planned to ask Obama on air about about the DOJ investigation into her father’s death.

WH Pool observed some chaos w/ Erica Garner apparently being boxed out of asking a ? at tn’s POTUS townhall pic.twitter.com/zCKK73vXAA

Thursday’s presidential town hall comes just one week after two black men, Philando Castile and Alton Sterling, died in fatal encounters with law enforcement. The discussion also follows the fatal shooting of five police officers as they escorted a peaceful protest against police brutality through the streets of Dallas, Texas.

Several speakers had the chance to ask Obama questions during the town hall, including Diamond Reynolds, Castile’s girlfriend, who broadcast the aftermath of his shooting on Facebook Live, and Edward Flynn, the chief of the Milwaukee Police Department who came under fire in May after offering a list of “Four Simple Rules to Not Get Shot in Milwaukee.”

One of the tenser moments of the event came when Texas Lt. Gov. Dan Patrick asked Obama to illuminate the White House in blue to show solidarity with police officers. Patrick challenged Obama’s previous comments about race and policing in America, asking the president to “not be too critical [of police] before the facts are known.” In an interview after the Dallas shooting, Patrick said that Black Lives Matter protesters were “hypocrites” for running away from the gunfire.

Obama countered that he already supports police officers and their right to due process. “We know what a tough job they have,” he said. “What I have said is that the data shows that there are disparities in how persons of color and whites are treated in the aggregate. We have to make sure that we don’t pretend that there aren’t potential problems in how communities and police interact.”

Erica Garner said that despite being promised by the network that she would be allowed to ask a question, the taping concluded before she could speak. She has been tweeting about her experience at the town hall for several hours, calling the ABC News special a “farce” and a “sham.”

Yo this town hall that presidential town hall #abc arranged is a farce. It was nothing short of full exploitation of Black pain and grief

They lied to me and my family to get us to travel to DC to participate. Taking time away from things I had planned to remember my father.

they promised me that if ANY questions got asked of #POTUS that mine would be asked… They lied to both me and @osope to get us there.

I should have known something was wrong when they had little Cameron Sterling standing with the Lt. Gov of Texas while he denounced BLM

I speak for myself and many others from the movement for Black lives when I say we wereused n I don’t endorse what happened today on #abc !

I went there trying to represent THE PEOPLE… #ABC wanted ratings even if it meant they had to profit from Black misery and oppression.

A spokesperson for ABC told USA Today that while Garner was unable to speak during the broadcast, “the president spoke to several people after the event ended, including at length with Erica Garner.”

In a later tweet, Garner clarified that her frustration is not with Obama, but with the network for failing to follow through on its promise that she would be able to speak. In an interview with BuzzFeed, Garner also said that she was uncomfortable with the network’s decision to seat her next to the widows of Wenjian Liu and Rafael Ramos, two NYPD officers killed in an ambush that occurred days after the grand jury declined to indict Pantaleo in Eric Garner’s death.

I was not upset about not speaking with #POTUS . i was upset because #ABC lied and used me, my pain, and suffering for ratings.