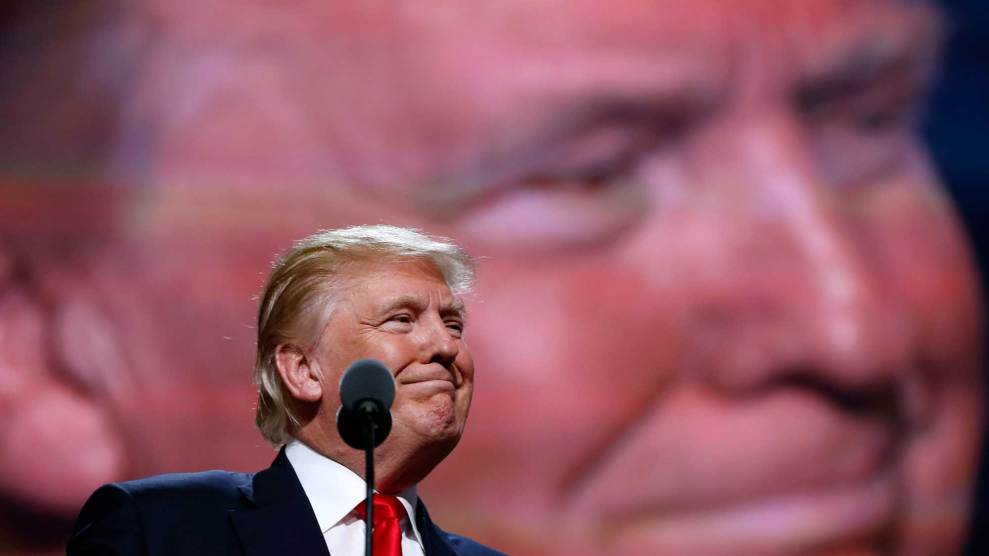 This is what you need to know about Donald Trump’s GOP. At the convention in Cleveland, Alex Jones, a prominent peddler of conspiracy theories, was in the hall as a special guest.

Jones sells paranoia. He is a 9/11 truther who claims that George W. Bush and Dick Cheney were in on the attack on the World Trade Center and the Pentagon. He has promoted the idea that dissidents in America will be rounded up and placed in FEMA camps. His website maintains that the tragic Sandy Hook shooting was a hoax orchestrated so gun safety advocates could demonize gun owners. Jones tells his followers that the world is controlled by a global cabal—a coven of elites who can handpick the president of the United States.

And in Cleveland this week, Jones was a celebrity. (Trump has praised him in the past.) During the convention, he was often in the company of Roger Stone, a longtime adviser to Trump and veteran bad-boy political operative who also likes to sell conspiracy theories. Stone wrote one book asserting that LBJ killed JFK, and a more recent Stone volume claimed that Bill Clinton was a serial raper. Two years ago, Stone tweeted that Hillary Clinton should be executed for treason. In Cleveland, he organized the largest pro-Trump rally of the week, and he said he was meeting with Trump staffers.

The Stone-Jones vision is a dark one: Corrupt and tyrannical evildoers are in charge, and they must be removed—by death, if necessary. The existence of the United States is threatened by enemies at home, and extreme measures are called for. And Trump has encouraged and exploited this fear and hatred.

The most prominent chant at the convention was “lock her up!”—a reference to Hillary Clinton. The delegates laughed as they shouted this line, but this was an ugly development. In modern times, there has been no convention where the opposing candidate was treated in such a manner. And Trump and his people did nothing to tamp this down. After all, delegates promenaded about this week wearing “Hillary for Prison” buttons and T-shirts. And his campaign issued only a tepid statement of disapproval when a prominent supporter this week called for killing Clinton on a firing line. The rhetoric of Trumpism has been virulent and violent. (Trump’s crude behavior has been contagious within the GOP; Chris Christie during the primary campaign vowed to “beat [Clinton’s] rear end” if he were to become the party’s presidential nominee.)

A Texas delegate told me that Trump was needed now “to take back the country from our enemies who have taken away our freedom and liberty.”

Trump’s attempt to criminalize Clinton is a low in American politics. He started this effort by tagging Clinton—a woman he has praised in the past—as “Crooked Hillary.” This name-calling and demonization, which has been accepted by a large chunk of GOP officialdom and embraced by much of the Republican electorate, has signaled to GOP voters that Clinton is not a legitimate candidate who should be debated honestly. It’s a continuation of the birtherism that Trump championed. Politics is no longer the processing of policy disagreements. It is a titanic battle between the forces of good (us) and the sly treasonous enemy within (them). There’s no need to contemplate policy disputes or dare consider compromises. You do not debate traitors. The foe must be derided, eviscerated, and placed in chains, because he (Barack Obama) or she (Hillary Clinton) has usurped power through underhanded means to implement a covert agenda to undermine the nation. In such extreme circumstances, why not resort to excessive measures? Isn’t it a patriot’s duty?

Not too long before Trump was to hit the stage on the final night, a Texas delegate for Trump explained what was at stake. Tom Mathis, a 38-year-old out-of-work oil worker now attending college, told me that Trump was needed now “to take back the country from our enemies who have taken away our freedom and liberty.” What enemies? “Barack Hussein Obama,” he said.

Is the president truly an enemy?

“Yes, and patriots know that.”

And should delegates really be calling for the imprisonment of Clinton, rather than focus on policy matters?

And what would it mean if she does manage to win the election in November? “That the system is corrupt,” Mathis said, “and that we’ll have to do something else to save this country.” He left open what that would be.

This is the message of Alex Jones and Roger Stone. They repeatedly assert that the government is one big con and that Clinton can only triumph through voting fraud. And Trump said the same in his acceptance speech.

Americans, he asserted, “have lived through one international humiliation after another.” And he declared, “This is the legacy of Hillary Clinton: death, destruction and weakness.”

When the convention finally turned to the nominee, Trump delivered an address that was full of gloom and doom. He depicted the nation as in decline and under siege from crime and terrorism that threatens “our very way of life.” (Actually, certain crime rates are down.) He repeatedly vowed in Nixonesque fashion to be a “law and order” president and promised that “beginning on January 20, 2017, safety will be restored.” Americans, he asserted, “have lived through one international humiliation after another.” And he declared, “This is the legacy of Hillary Clinton: death, destruction and weakness.”

Trump gave a large wink to Alex Jones and his crowd: “Americanism, not globalism, will be our credo.” He went on: “Big business, elite media, and major donors are lining up behind the campaign of my opponent because they know she will keep our rigged system in place.” Trump insisted several times that Clinton had committed crimes: “Her single greatest accomplishment may be committing such an egregious crime and getting away with it.” She has been a leader and beneficiary, he said, of a deceitful machine. And, he added, “No longer can we rely on those elites in media, and politics, who will say anything to keep a rigged system in place.”

The language of Trumpism is paranoia. He seeks to take advantage of resentments and anger. He encourages hatred and division. He has normalized crude discourse, thuggery, misogyny, and bigotry. He wants Americans to feel threatened and afraid. His business plan relies on pessimism. And many party leaders—including some who loudly denounced him during the primary campaign—have joined the ride. Moreover, he has laid down a dangerous marker: If Clinton wins, that’s proof that the system is rotten. So then what? She will be an illegitimate leader who must be opposed and removed?

The GOP convention has been a weeklong parade of fear and loathing. And whiffs of violence have been in the air. (“The answer to 1984 is 1776,” Jones shouted at a rally.) This official embrace of suspicion and distrust is unprecedented—and dangerous. “I am your voice,” Trump thundered during his dour acceptance speech. The GOP delegates cheered in response. Trump was right. With the support of millions of Republican voters and the acquiescence of GOP elites, he has given voice to darker impulses and has altered the American political landscape. It is his most consequential construction project yet.