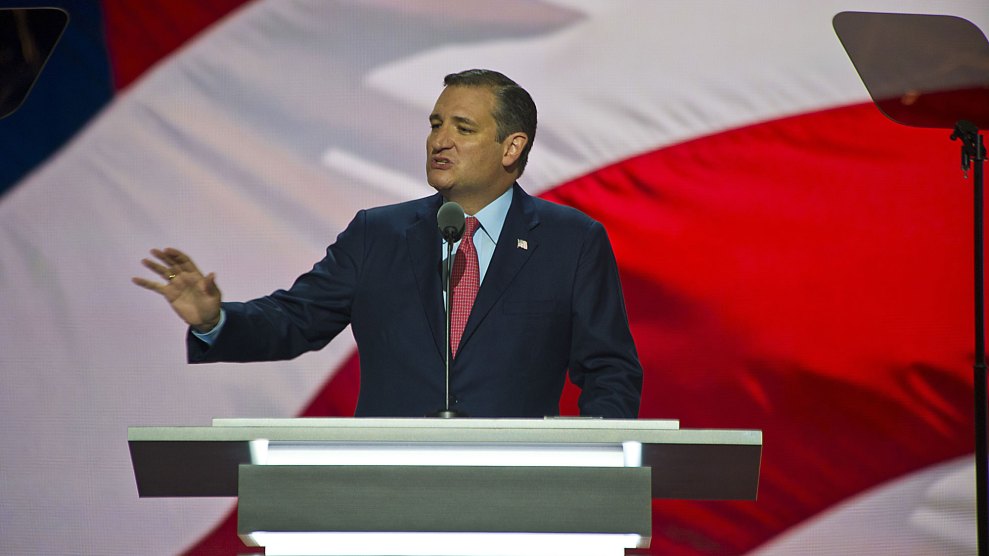 On Thursday morning—after he was booed at the Republican convention the night before—a defiant Sen. Ted Cruz declared that he would not grovel “like a servile puppy” to endorse Donald Trump, the man who attacked his wife and father. In a heated breakfast meeting with members of the Texas GOP delegation in Cleveland, Cruz, who was soundly denounced by Trump and his allies after refusing to endorse Trump during a convention speech, reiterated a call for Republicans to vote their “conscience.”

Before Cruz spoke, the mood among the Texas delegates who had gathered in the downtown Marriott was conciliatory. Trump “wasn’t even my 8th or 10th choice,” Rep. Jeb Hensarling told the room. “But you know what? He is my nominee, and I’m gonna give him 110 percent.” The powerful House Financial Services chairman added, “It’s time for all of us to put the primary in our past.” (Outside, he characterized Cruz’s speech more bluntly, telling reporters that Cruz had missed a “two-foot putt.”)

When he addressed his home-state delegates, Cruz moved to deflect the criticism surrounding his prime-time address, which was received so poorly by the crowd at the Quicken Loans Arena that his wife had to be escorted out by security. He reminded delegates that the mob of television cameras and scribbling reporters in the back of the room were not their friends and were eager to sow discord within he conservative movement. And he promised not to say anything bad about Trump, noting that the two men had spoken three days earlier and that Trump knew well in advance that the speech would not amount to an endorsement. “They knew exactly what I was gonna say,” Cruz said, adding, “I was perfectly happy to get on a plane and go home.”

But when Cruz took questions from the audience, he left little doubt about his stance on Trump. Delegate after delegate stood up and posed a variation of the same question: Would Cruz get on board? Each time, Cruz pivoted to a different line of critique. He slammed Republicans who would “attack as a traitor anyone who would question our candidate.” He talked up his stand as a principled conservative with the guts to speak his mind, poking at Trump critics who “turned tail and ran and didn’t come to the convention.”

When a questioner asked Cruz how Trump could bring “constitutionalists on board,” Cruz pointed right back to his speech, calling it an “outline” designed to show Trump “how you win.” In Cruz’s view, bashing Hillary Clinton and talking endlessly about email servers—Cruz’s convention speech was not to be interrupted by “lock her up!” chants—would not lead to victory in November. Trump, he insisted, has to talk about “freedom.”

Throughout his session, Cruz was heckled by members of his own delegation. One man held up a homemade “Clinton-Cruz 2020” sign. When Cruz said he believed Republicans would indeed win in November, another shouted, “With or without you!” But Cruz used the hostile room to his advantage. Despite his earlier promise not to criticize Trump, he decried Trump supporters who at the convention have been “blindly chanting a name and yelling down dissenters.” And he asked, “What does it say when you stand up and say ‘vote your conscience’ and rabid supporters of our nominee began screaming, ‘What a horrible thing to say’?” He compared his own courageous decision to speak to a less-than-friendly room to Trump’s attitude toward critics: “Can anyone imagine our nominee standing in front of voters answering questions like this?”

Cruz, who had previously signed the GOP pledge to support the eventual nominee, told the Texas delegates that he could point to the exact moment when Trump crossed a line: when the called Cruz’s wife ugly in a tweet and then accused Cruz’s father of possibly being involved in the Kennedy assassination. “That pledge,” he said, “was not a blanket commitment that if you go and slander and attack Heidi that I’m gonna nonetheless come like a servile puppy dog and say, ‘Thank you very much for maligning my wife and maligning my father.'”

When he finished making this point, he addressed a man in the back of the room who was mocking Cruz. “I will note, sir, that you might have a similar view if someone was attacking your wife—in fact I hope you would,” Cruz said.