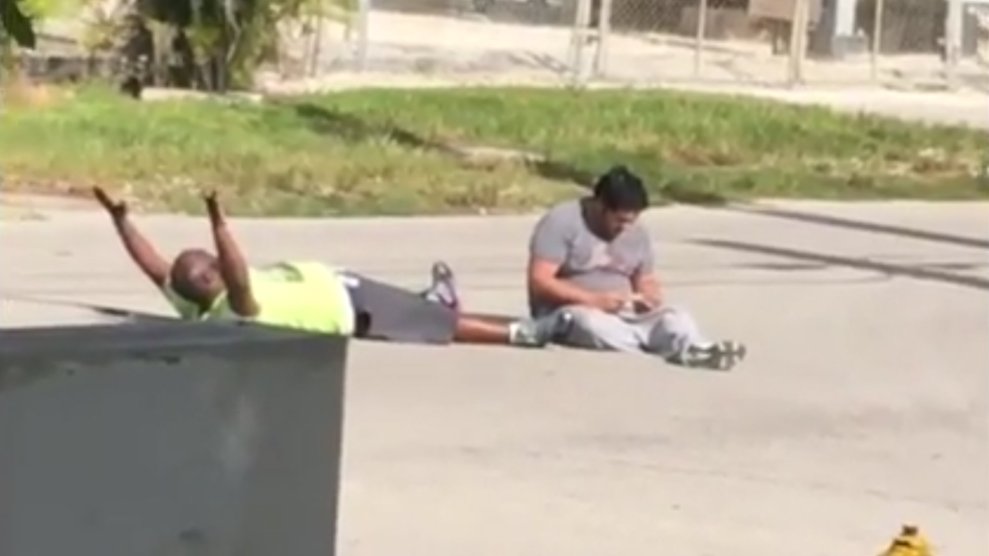 On Monday, Charles Kinsey, 47, was shot by a police officer in North Miami, Florida, apparently while lying on his back on the ground with his hands in the air. Videos of the incident have caught fire on social media in the wake of two other high-profile shootings of black men by police officers in Louisiana and Minnesota in recent weeks. The shooting, which Kinsey survived, is under investigation by the Florida Department of Law Enforcement and the state’s attorney’s office. Here’s what we know about the incident to date:

Around 5 p.m. on Monday, a 911 caller reported a man in the street with a gun who was threatening to kill himself, according to North Miami police. When officers arrived, Kinsey and another man were in the street. Officers “attempted to negotiate” with the men, “one of whom was later identified as suffering from autism,” a spokesperson for the police department said in a statement, and “at some point” during the encounter, an officer shot Kinsey. The actual shooting was not captured in two videos of the incident circulating online. No gun was recovered from the scene, according to Miami Police Chief Gary Eugene.

In one of two videos recorded by a bystander, Kinsey can be seen lying in the street on his back with his hands in the air, while another man is seen sitting upright with his legs crossed and playing with a toy. Kinsey, who was a caretaker at MacTown Panther Group Homes, told local reporters from his hospital bed after the incident that the second man—Kinsey calls him Rinaldo in the video—was a patient at the home and had wandered from the facility. Kinsey had gone to retrieve the man, who is autistic, when officers arrived.

Two officers, positioned behind light posts on opposite sides of the street, can be seen aiming weapons in the men’s direction. At one point, Kinsey can be heard telling officers that he and Rinaldo do not pose a threat, and that he is the man’s caretaker.

“All he has is a toy truck. A toy truck. I am a behavior therapist at a group home,” Kinsey says. Kinsey also tries to convince the man to comply with the officers’ orders. “Rinaldo, please be still, Rinaldo. Sit down, Rinaldo. Lay on your stomach, Rinaldo.” At one point, the man appears to angrily yell at Kinsey to shut up, and Rinaldo continues playing with his toy in the street.

In a second video, recorded after the apparent shooting, Kinsey can be seen still lying on his back, while Rinaldo is facedown on his stomach, handcuffed as an officer searches his pockets. Three officers are on the scene; one is carrying a rifle. The person holding the camera can be heard saying, “He’s like, ‘Please don’t shoot me,” apparently referring to Kinsey’s communication with the police before he was shot, once in the right leg. A second person asks, “But why they shot the black boy and not the fat boy?” Miami police leaders have said they don’t know whether the officer was aiming for Kinsey or Rinaldo when Kinsey was shot.

A spokesperson for the group home told local news outlet Local 10 News that Rinaldo, 23, is nonverbal and has “relatively low function.” Kinsey told local news outlet WSVN that an officer had fired three shots, and that after the incident, officers turned him over and handcuffed him while he was still bleeding from his leg. “I’d say about 20 minutes it took the rescue squad to get there,” Kinsey said. He added that when he asked the officer who shot him why he did it, the officer said, “I don’t know.” As of Thursday morning, Kinsey reportedly was in good condition, recovering in the hospital.

Kinsey’s attorney Hilton Napoleon told the Miami Herald that the shooting “didn’t make any sense,” and that Kinsey was already negotiating a possible settlement with the city.

The names of the officers involved have not been released, but the officer who shot Kinsey has been placed on administrative leave, according to the Herald. At a press conference Thursday, Eugene said he had asked the Florida Department of Law Enforcement to investigate the shooting to ensure “transparency and objectivity,” noting that the Florida state’s attorney’s office was also looking into the case. After the other agencies have concluded their investigations, he said, the case will be referred back to the North Miami PD for an internal review.

Kinsey told reporters that he was more concerned about his patient’s well-being during the incident, because he assumed officers would not shoot him if he had his hands up. “Wow, was I wrong,” he said.

Update: Speaking to a local Miami news station, Miami-Dade County police union president John Rivera said the officer who shot Kinsey had been aiming for Rinaldo and missed. He said it appeared that Rinaldo had a gun and was going to shoot Kinsey.