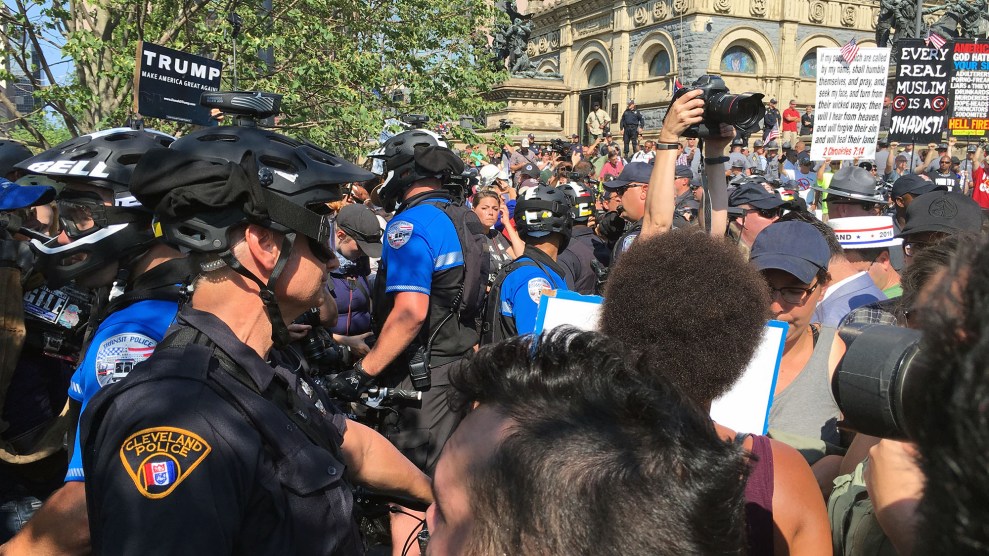 Tensions flared in downtown Cleveland Tuesday afternoon following a day of peaceful protests and lively debate among various political groups gathered in the city’s Public Square. After a near-brawl between conspiracy theorist Alex Jones and a group of self-proclaimed communists, police cleared the square, which has been the site of many rallies and speeches during the Republican National Convention. A smaller group of protesters then led police on a chase through the streets around the convention.

The incidents represented the first major conflicts between protesters and police in Cleveland this week.

Shortly before 4 p.m. local time, a group of communists were on a set of stairs at the edge of the square debating some supporters of Donald Trump, according to Pat Mahoney, one of the communists. Mahoney said he was a member of the Industrial Workers of the World, a leftist workers’ organization.

“We were singing, and all I heard [was someone saying], ‘Communists,'” Mahoney told Mother Jones. He added that Jones “tried to come up the stairs, and pushed us back, and then he [shoulder-checked us], and that’s when the melee went in.”

Jones, an Austin-based radio host and Trump ally who is best know for his 9/11 conspiracy theories, did not respond to multiple requests for comment.

As the situation began to spiral out of control, police converged on the group and, along with Jones’ private security guards, surrounded Jones. They ushered him through the crowd and across the square and then loaded him into the back of an SUV that was quickly surrounded by protesters. Police cleared space around the car before it sped away.

Mahoney and his group have been participating in marches and protesting against Trump in the area surrounding the convention since it began on Monday. He said everything up until that point had been peaceful.

“We did this yesterday, and we came out here, and we were just talking with people and having discourse,” Mahoney said. “There was good discourse. There’s plenty of people here who are conservative that we talked to yesterday and we had good discourse. Sometimes it got heated, but it was never like, ‘Oh, I’m going to kill you!”

“Forty-five minutes before [the melee] happened it was awesome down here,” said Gabe, another man standing with Mahoney, who declined to provide his last name. “Positive atmosphere. It was great.”

After the dust-up, police flooded the square, quickly forming lines that divided it into four quadrants. The police then gradually cleared the square. Several hundred people began chanting and yelling at the police.

About an hour after police cleared the square and tensions calmed, a small group of protesters who were milling around the area broke off from the other demonstrators and were immediately followed by dozens of police. The police and protesters clashed at one point when police tried to block some of the demonstrators from rejoining the rest of the group.

After tensions cool, a side march gets testy. pic.twitter.com/LJBvfyf7yd

No arrests were made, according to the City of Cleveland Joint Information Center, and the protesters ran off down another street and were followed by police.