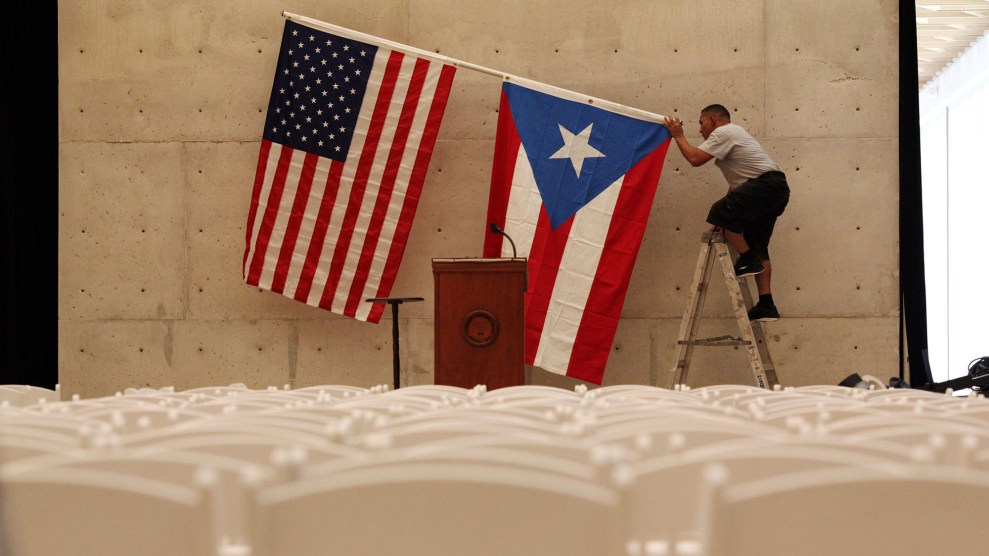 Two days before Puerto Rico was set to default on $2 billion in debt payments, the Senate staved off calamity by advancing a measure Wednesday that will allow the island to restructure its debts.

The Puerto Rico Oversight, Management, and Economic Stability Act, known as PROMESA, now heads to President Barack Obama for his signature. It will create an independent financial oversight board that will oversee the island’s budgets and allow the Puerto Rican government to restructure its nearly $70 billion in debts with 18 different creditors. A key provision would halt all pending litigation related to the debt—there are currently 14 different lawsuits—and allow for continued funding of essential public health and safety services for the island’s 3.5 million residents.

The measure was tacked on to a bill in the Senate that will reauthorize the National Sea Grant Program through fiscal year 2021.

“Obviously, the bill isn’t perfect,” Senate Majority Leader Mitch McConnell (R-Ky.) said after its passage, according to the Washington Post. “But here’s why we should support it: It won’t cost taxpayers a dime; it prevents a bailout; and it offers Puerto Rico the best chance to return to financial stability and economic growth over the long term so we can help prevent another financial crisis like this in the future.”

On Monday, Treasury Secretary Jack Lew sent a letter to McConnell arguing that failure to pass the bill by July 1 could lead to Puerto Rico defaulting on a $2 billion debt and interest payment and a possible court order forcing the island’s government to pay creditors before providing essential services for its people. The result could have been that Puerto Rico would have stopped paying police officers and firefighters, shut down public transit, and even closed medical facilities.

The next day, Puerto Rico Gov. Alejandro Garcia Padilla wrote an op-ed for CNBC and argued that there was no choice but to pass this bill. He noted that the island’s government has already cut millions in spending, eliminated thousands of public jobs, raised taxes, and withheld tax returns, and is currently $2 billion behind in payments to suppliers (in addition to the $2 billion debt payment due July 1).

“The emergency measures we have taken are unsustainable, harm our economy, reduce revenues and diminish our capacity to repay our debts,” he wrote. “Puerto Rico cannot endure any more austerity.”

The governor’s op-ed echoed many Democrats, Puerto Ricans, and observers and said the independent financial review board—which has broad powers over the island’s budget decisions and is not accountable to any local elected leaders—”unnecessarily undercuts the democratic institution of the Commonwealth of Puerto Rico.” Democracy Now’s Juan González noted Wednesday that a majority of Puerto Ricans oppose the bill and even the concept of an independent review board.

On Tuesday, as the Senate debated the bill, Democratic presidential contender Sen. Bernie Sanders railed against the bill, urging his colleagues not to support it, according to the Washington Post. Sanders has opposed the bill since it was proposed in the House.

“Is this legislation smacking of the worst form of colonialism, in the sense that it takes away all of the important democratic rights of the American citizens of Puerto Rico?” he asked Sen. Bob Menendez (D-N.J.), who was speaking against the bill at the time. “That basically, four Republicans who likely believe in strong austerity programs will essentially be running that island for the indefinite future?”

Here’s how the financial review board works: The president will appoint the seven-member board by September 1, choosing the members from a list of names submitted by congressional leadership. ?A nominee must have a background in finance, municipal bond markets, management, law, or government operations and cannot have a primary residence or business interest on the island. House Speaker Paul Ryan (R-Wisc.) will nominate three members; McConnell, Senate Minority Leader Harry Reid (D-Nev.), House Minority Leader Nancy Pelosi (D-Calif.), and Obama will each nominate one. The governor of Puerto Rico, or his designee, will have a non-voting spot on the board.

The cash-strapped Puerto Rican government is responsible for coming up with the initial $2 million to establish the board—which will operate without any local oversight— and then will also be responsible figuring out its budget and permanently funding it to cover salaries for an executive director, other staff members, and overhead. The board will continue to be in charge of Puerto Rico’s financial existence until the island’s government has “adequate” access to short-term and long-term credit markets at reasonable interest rates and develops and maintains four consecutive years of on-target, board-determined budgets.