The 2016 primary is finally over. Now the real fun starts.

Before we begin the final five-month sprint to the November 8 general election, let’s look back at the big moments from the Democratic and GOP primary races.

• With no clear front-runner, 17 candidates throw their hats into the ring for the wide-open race for the Republican nomination. It’s a logistical nightmare on a number of levels. For one, the debates get divided into two tiers—a main debate for the candidates polling the highest and a kind of kid’s table forum for all the other candidates. Often, the forums are organized based on poll numbers. No one stuck in the second tier likes it. The first debate, in Cleveland on August 6, 2015, includes 10 people in the main debate and 7 people in the secondary event. Rick Perry drops out soon afterward, becoming the first Republican to do so. 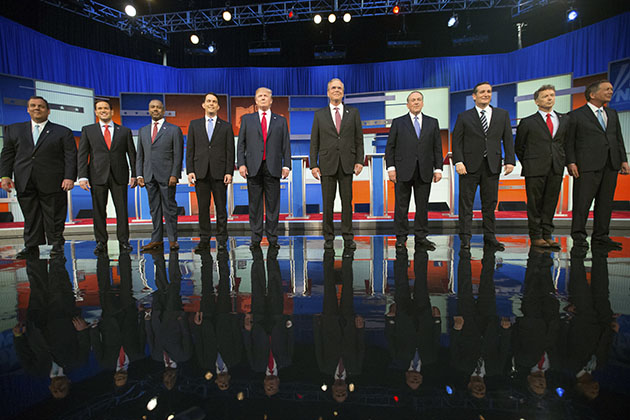 • The Democrats field six candidates, but Jim Webb and Lincoln Chafee both bow out in late October 2015, quickly followed by Larry Lessig. Martin O’Malley holds on until February, leaving Hillary Clinton and Bernie Sanders to slug it out. 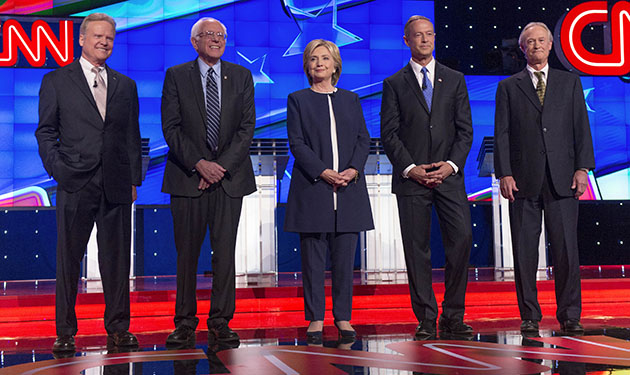 • At an August 2015 Bernie Sanders rally in Portland, an estimated 28,000 people show up. Sure, it’s friendly turf, but the size and energy of the crowd is unexpected, even to Sanders. 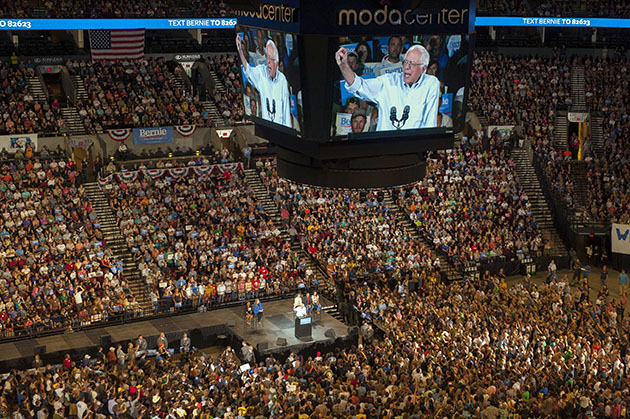 Bernie Sanders speaks to a crowd estimated at 28,000 at Moda Center in Portland, Oregon.  Ken Hawkins/ZUMA

• In the Iowa caucuses, Clinton just barely bests Sanders, 49.8 percent to 49.6 percent. This close race foreshadows the tough fight Clinton will have throughout the primary. Ted Cruz narrowly defeats Donald Trump in Iowa, with Marco Rubio right behind in third. Trump goes on to decisively win the next three contests in New Hampshire, South Carolina, and Nevada. 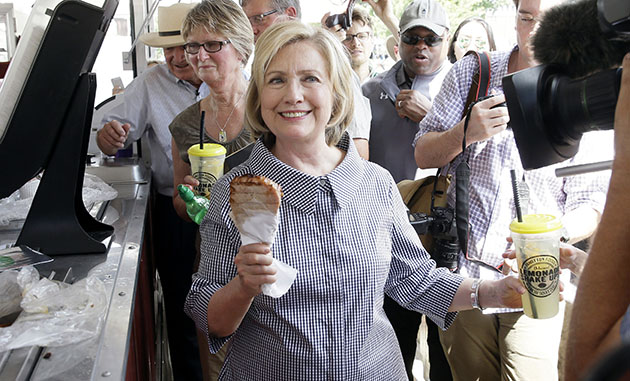 • Trump versus Kelly: At the first presidential debate, Fox News host Megyn Kelly gets under Trump’s skin by asking him about derogatory remarks he’s made about women. Trump later responds in a CNN interview in regards to Kelly: “There was blood coming out of her eyes, blood coming out of her wherever.” Trump sits out the next Fox-hosted debate, instead organizing a fundraiser for veterans. This tit for tat culminates with a heavily hyped Barbara Walters-style interview between Kelly and Trump that proves to be disappointing for those tuning in for fireworks. 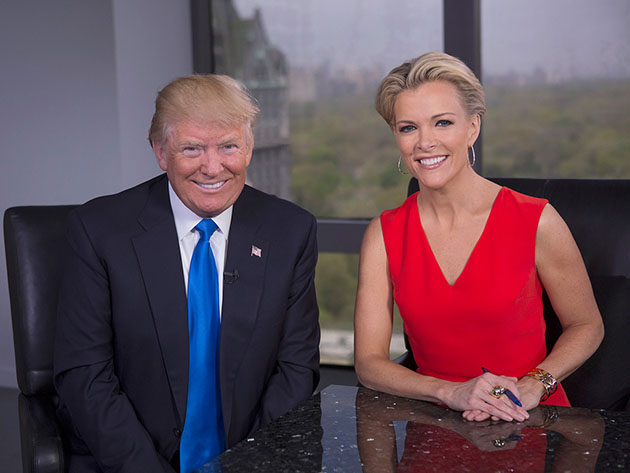 • Time photographer Christopher Morris, no stranger to covering politics, gets choke-slammed during a Trump rally by a Secret Service agent.

• Over the course of the primaries, Republicans hold 12 debates. The Democrats have nine. Both the Republican and Democratic debates make news, but most often for awkward moments, such as Clinton’s long bathroom break. 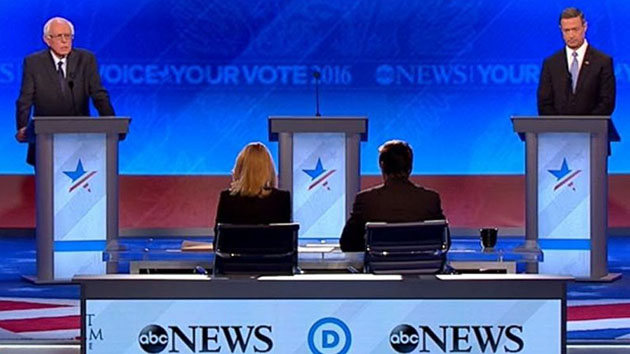 …And the awkward entrance of Ben Carson at the ABC New Hampshire debate.

• Then the USA Freedom Kids happened.

• After his stage was overrun by Black Lives Matter protesters during a Seattle stump speech in August, Sanders makes more of an effort to reach out to African Americans. Most notably, he makes friends with Atlanta rapper Killer Mike. 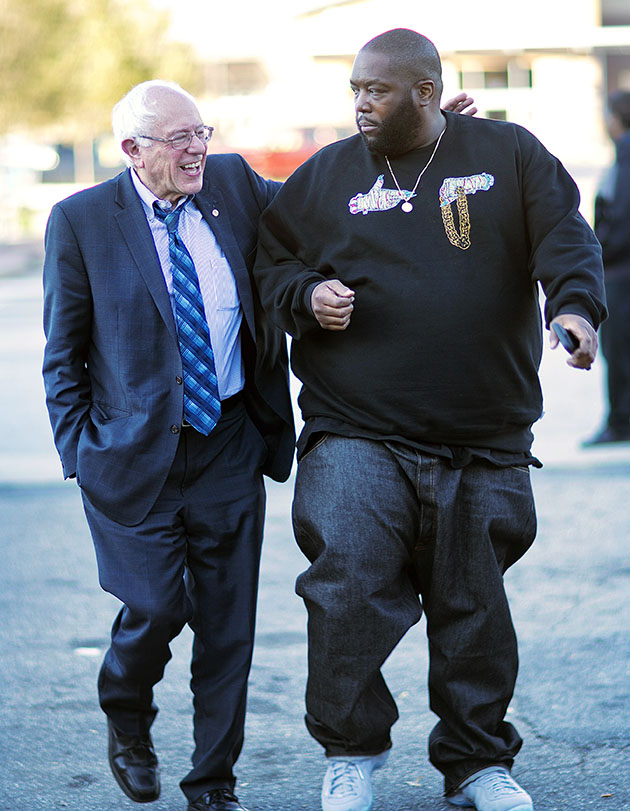 • As Trump’s candidacy gains steam, more protesters show up at his rallies. One of the first incidents occurs in mid-October, in Richmond, Virginia. Immigration activists interrupt the rally. They have their signs ripped from them and are spit on. Egged on by Trump, his supporters take to roughing up protesters who show up at subsequent events. Later, in Miami, a Latino protester is knocked down and kicked. Violence follows Trump rallies all through the primaries. 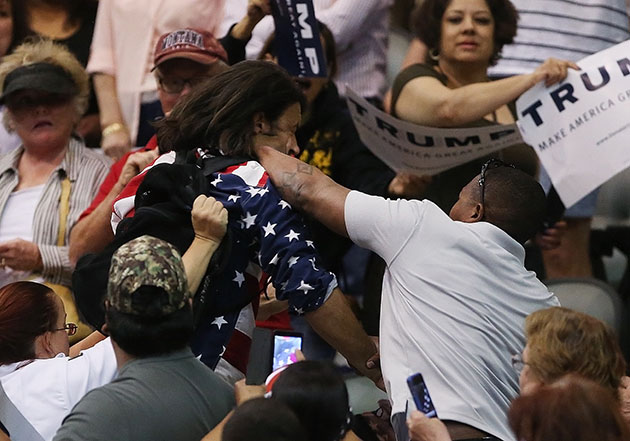 Trump protester Bryan Sanders, center left, is punched by a Trump supporter as he is escorted out of a rally for Republican presidential candidate Donald Trump at the Tucson Arena in March 2016. Mike Christy/Arizona Daily Star/AP

• Echoing the violence of Trump supporters, Corey Lewandowski, Trump’s campaign manager is accused of grabbing Breitbart reporter Michelle Fields as she tries to ask a question. Lewandowski adamantly denies this, despite being caught on camera. He is charged with simple battery, but the charges are later dropped.

• Cruz breaks tradition and names Carly Fiorina as his running mate while he’s still deep in the primary race. Candidates typically wait until the field is clear and they’re headed into the convention. It’s an awkward moment.

• Then Cruz argues with a Trump supporter in Marion, Indiana, who repeatedly tells Cruz to drop out. 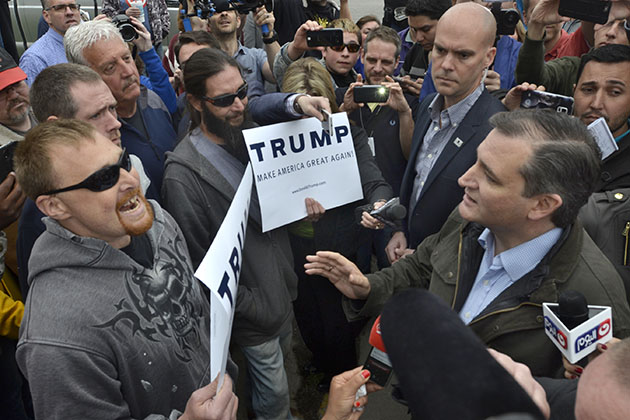 • Cruz stuns his supporters and withdraws from the race after losing in Indiana. Trump becomes the presumptive nominee and even some of the most ardent #NeverTrump Republicans start falling in line behind him. 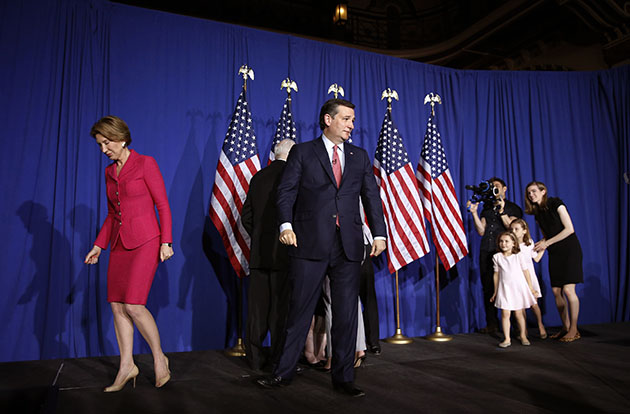 Ted Cruz walks off the stage with his running mate, Carly Fiorina, as his young daughters Caroline and Catherine look on after he dropped out of the race for the 2016 Republican presidential nomination during his Indiana primary night rally in Indianapolis. Chris Bergin/Reuters/ZUMA

• A day before the last state primaries, the Associated Press calls the Democratic race for Clinton, saying she’s reached the number of delegates, including superdelegates, needed to make her the presumptive Democratic nominee for president. Clinton’s victory becomes official after she wins the New Jersey primary. Sanders and his supporters vow to keep up the fight and make plans to stay in the race until the Democratic Party’s convention. 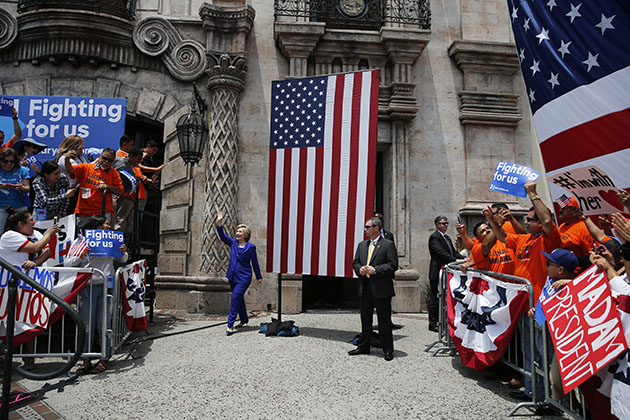