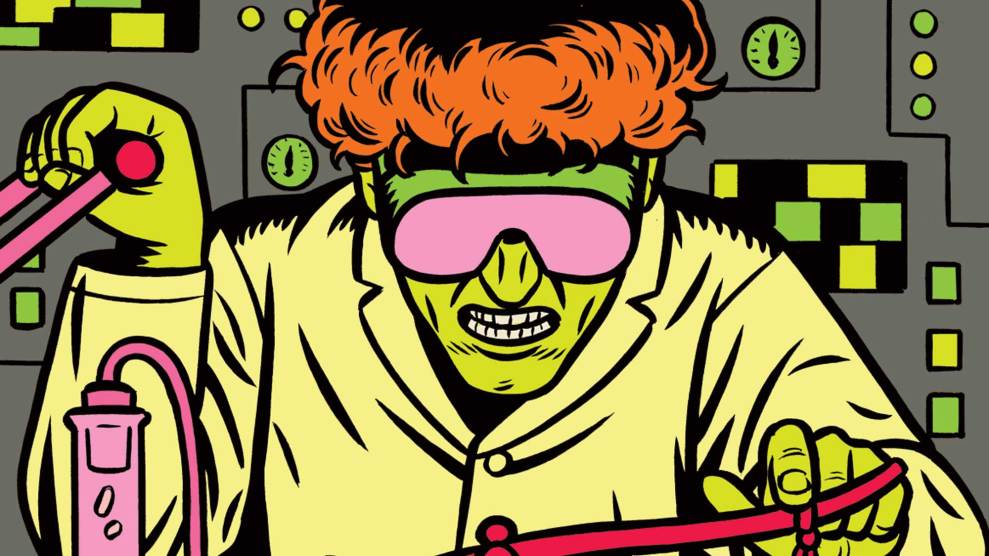 In 2012, Kansas Gov. Sam Brownback launched a “real live experiment” in conservative governance. He slashed income taxes for top earners and eliminated them for more than 330,000 small businesses, promising the cuts would be “a shot of adrenaline into the heart of the Kansas economy.” Instead, the result has been disastrous. By the end of 2015, the state had lost nearly $3 billion in revenue and was behind most other states in job growth. And when the courts challenged the constitutionality of the bare-bones budgets, Brownback and his allies launched an all-out war on the state’s judges.

May 22, 2012: Over the objections of many fellow Republicans, Brownback signs a tax-cut bill predicted to gut the budget and slash school funding.

Brownback is “trying desperately to get ahold of the third branch of government, because right now it’s the only branch that stands in the way of his complete takeover of Kansas government.”

—Ryan Wright, the Republican leader of Kansans for Fair Courts

March 7, 2014: The state Supreme Court rules that Kansas is violating the state constitution’s mandate that schools get equitable funding. It orders the Legislature to devote tens of millions of dollars to low-income districts and asks lower courts to reexamine school spending.

April 17, 2014: Brownback retaliates by signing HB 2338, a bill that strips the state Supreme Court of the power to appoint chief judges to district courts.

“It was a blatant attempt to purchase a court opinion. Either you find this bill constitutional or we revoke all your funding. I mean, what kind of message is that?”

February 18, 2015: A chief district judge files a lawsuit against HB 2338, arguing that it is an unconstitutional violation of the separation of powers.

June 4, 2015: Brownback signs a budget for the courts that contains a self-destruct button: If any court rules against HB 2338, the state’s entire judicial budget becomes “null and void.”

September 2, 2015: District Judge Larry Hendricks finds HB 2338 unconstitutional—and just like that, Brownback and his allies have defunded the state courts.

September 3, 2015: A constitutional crisis ensues: How can the state defend its law in court if the courts themselves have been shut down? Hendricks agrees to put his ruling on hold until the state Supreme Court can resolve the HB 2338 case.

September 4, 2015: Four judges file a new lawsuit challenging the constitutionality of the “null and void” provision.

September 18, 2015: Kansas Attorney General Derek Schmidt, a rising political star, recuses himself from this new case. In his place, he hires Bradley Schlozman (whom an inspector general once found “unsuitable for federal service” due to his role in the politicization of the Justice Department during the Bush administration). But Schmidt then hatches a bizarre plan to shut down the judges’ lawsuit: He convinces a Brownback-appointed judge in tiny Neosho County to freeze the “null and void” provision.

November 10, 2015: Two weeks before the Kansas Supreme Court considers HB 2338, the state requests the recusal of every justice on the court. In essence, the state argues it has created a law its highest court cannot review. The chief justice recuses himself, but the other six justices hear the case.

December 23, 2015: The state Supreme Court finds HB 2338 unconstitutional, daring Brownback and his allies to shut down the courts.

February 8, 2016: Brownback blinks, signing a bill to reverse the “null and void” provision and preserve the judicial budget.

February 11, 2016: The state Supreme Court threatens to shut down the schools if the state does not appropriate more money to them. Later that day, lawmakers pass a new budget that ignores the ruling. The Legislature now has until June 30 to come up with the money; otherwise, schools may not open in August.

March 22, 2016: The Kansas Senate narrowly passes a bill that would let lawmakers impeach state judges for “discourteous conduct” and other transgressions—a measure that could be invoked if the state Supreme Court continues to challenge the Brownback experiment.