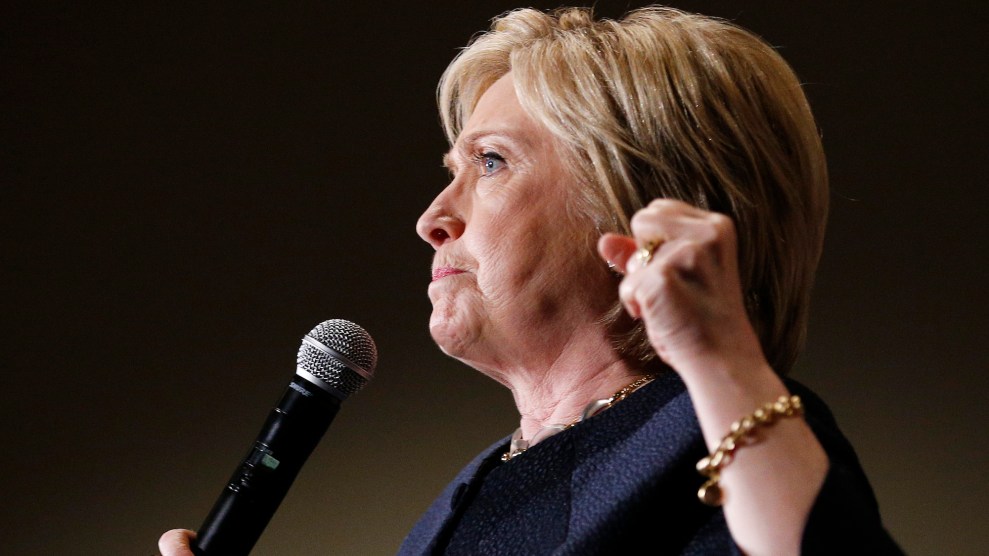 Hillary Clinton launched her toughest attack yet on Donald Trump in a foreign policy speech in San Diego, California, on Thursday, attacking the presumptive Republican presidential nominee as an ignorant and dangerous figure whose election would be a “historic mistake.”

“I believe the person the Republicans have nominated for president cannot do the job,” she said. “I believe he will take our country down a truly dangerous path.”

Clinton mocked Trump’s volatile temper, name-calling, and penchant for fighting on Twitter. “It’s not hard to imagine Donald Trump leading us into a war just because someone got under his very thin skin,” she told her audience, which laughed frequently as Clinton ticked off her complaints about Trump. “We cannot put the security of our children and grandchildren in Donald Trump’s hands.”

The former secretary of state also ran down a long list of controversial and sometimes illegal foreign policy and defense stances Trump supports. In addition to his proposed ban on Muslim immigration, he has suggested breaking up NATO and other long-standing alliances if the United States isn’t better compensated, bringing back torture, and targeting the families of terrorists. Clinton attacked him for all those proposals, adding that Trump could spark an economic disaster and highlighting his friendliness for Vladimir Putin and other authoritarian leaders.

Although Clinton spoke about her own foreign policy experience and plans, most of the speech focused on Trump. The overriding theme was what Clinton called a “choice between a fearful America that’s less secure and less engaged with the world, and a strong, confident America that leads, to keep our country safe and our economy growing.”

Trump’s statements and proposals on foreign policy have prompted near-universal horror from diplomats, military officers, intelligence officials, and analysts—including some Republicans. A group of more than 75 Republican foreign policy experts blasted Trump in an open letter last month, saying he was “fundamentally dishonest” and “utterly unfitted” to be president. CIA Director John Brennan said he would refuse any orders to resume waterboarding or other acts of torture. Marine General Joe Dunford, the chairman of the Joint Chiefs of Staff, attacked torture as “inconsistent with the values of our nation” in response to Trump’s comments. The Huffington Post also wrote in April that there was panic among current and former military officers at the prospect of a Trump presidency.

Bad performance by Crooked Hillary Clinton! Reading poorly from the telepromter! She doesn’t even look presidential!