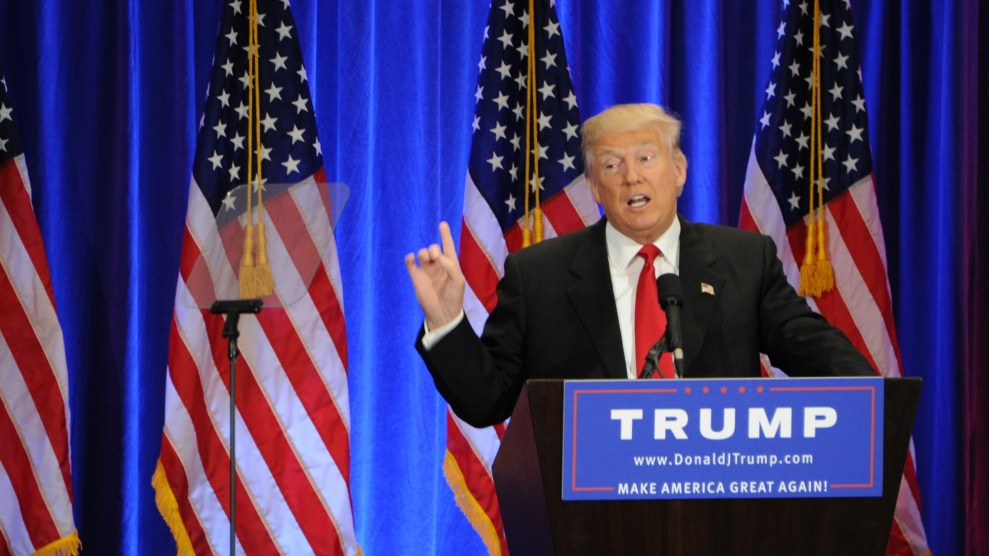 In his campaign speeches, Donald Trump often derides the political and business system as being “rigged” and controlled by insiders who twist and exploit the rules. But in his business career, he, too, has been caught engaging in shenanigans. And in one case, he paid a whopping amount to escape legal trouble.

That issue concerned his bold effort in the 1980s to gain control of large pieces of Holiday Corporation and Bally Manufacturing, two mainstays of the gaming (that is, gambling) industry. In the early part of that decade, Trump had moved into gambling by starting to develop a series of casinos in Atlantic City. The first, Harrah’s at Trump Plaza, opened in 1984. The next year, he unveiled Trump’s Castle. And he would soon have his eye on the Taj Mahal.

In the midst of his attempt to become a casino mogul, Trump, through the brokerage firm Bear Stearns, started buying up shares of Holiday and Bally in 1986. But there was a problem. Two years later, the Federal Trade Commission accused Trump of having violated a federal law that required him to report these stock purchases to federal regulators. Under the Hart-Scott-Rodino Act, persons or firms in certain transactions must notify the FTC and the Justice Department of mergers and large acquisitions of stocks and also submit to a waiting period. According to the FTC, Trump did not follow these rules. And the Justice Department in 1988 prepared to file a civil lawsuit against Trump, with the developer facing up to $1.5 million in fines. A spokeswoman for Trump huffed at the time, “We believe the suit would be without merit.”

But on April 5, 1988, the day the complaint was filed, Trump settled the case. He agreed to pay a $750,000 fine. He did not admit to any violation of the law. Yet the FTC, according to antitrust legal expert Robert Skitol, believed that Trump had used “put-call option agreements” with Bear Sterns to mask his large purchases of stock in each of these companies.

The settlement did not attract much media attention. It prompted a short notice in the New York Times. Trump proclaimed, “I firmly believe that I was in full compliance with the Hart-Scott-Rodino Act reporting requirements,” but he said he had agreed to settle “to avoid protracted litigation with the federal government over a highly technical disagreement between the FTC and the business community.” (These days, Trump, on the campaign trail, routinely boasts that he doesn’t settle lawsuits.) Trump added that ”the most respected lawyers in the business” had told him that the law exempted the purchase of stock options. ”I assume Bear, Stearns will reimburse me for the expense,” he noted.

When Spy magazine, a few years later, was investigating Trump‘s finances, it asked Alan Greenberg, the CEO of Bear Stearns, if the firm had picked up Trump’s tab. Greenberg replied, “No comment.” The magazine did note that Bear Stearns had kept “two somewhat mysterious accounts for Trump” and that “Trump’s arrangement with Bear Stearns is very curious.”

Asked about this episode, the Trump campaign declined to comment.

Fourteen years after the FTC action, Trump was again in trouble with Wall Street regulators. This time the issue was whether Trump’s hotel and casino company was trying to hoodwink investors and the public. At the end of the 1990s, Trump’s casinos in Atlantic City were tanking, amassing $150 million in net losses between 1996 and 1998. Yet in the third quarter of 1999, the company declared there was good news: it had “pro forma” earnings of $14 million. This surpassed Wall Street expectations and could be touted as evidence that Trump’s casino empire was not sinking.

Well, that was not the truth. In early 2002, the Securities and Exchange Commission slapped Trump Hotels and Casino Resorts, Inc. with a cease-and-desist order, noting that this earnings report had not been on the up-and-up. It turned out that the earnings statement had included an undisclosed one-time gain of $17.2 million resulting from the termination of a lease, and it excluded an $81.4 million charge due to discontinuing operations at Trump World’s Fair resort.

As Crain’s put it,

The earnings announcement was so distorted that the Securities and Exchange Commission called it “materially misleading” because it “created the false and misleading impression” that the company was performing better when in fact it was not. The SEC said that Trump Hotels & Casino Resorts violated federal anti-fraud laws by “knowingly or recklessly” issuing the information.

“This is the first commission enforcement action to address the abuse of pro forma earnings figures,” said Stephen Cutler, director of the SEC’s enforcement division when the case was brought in 2002. “The case starkly illustrates how pro forma numbers can be used deceptively and the mischief that they can cause.”

Trump dismissed the SEC action, saying the 1999 press release declaring the rosy earnings “was just a statement that was too verbose.” Trump did not admit any wrongdoing, but his company did agree to the cease-and-desist order. This time there was no fine.