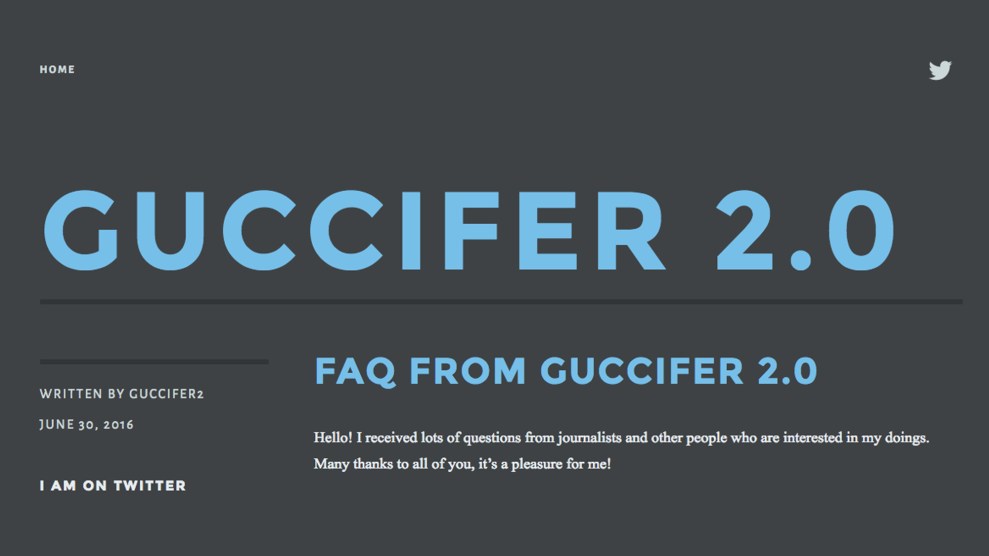 The hacker using the handle “Guccifer 2.0” posted another set of internal Democratic National Committee documents Thursday, along with a series of answers to questions posed to him by journalists and others via Twitter. The hacker claims to be a male, working alone, and said “none of the [US] candidates has my sympathies.”

The new set of documents includes memos about foreign donations to the Clinton Foundation, details of attacks on Hillary Clinton posted on Twitter by Republicans, spreadsheets with political action committee financial commitments (along with the email and phone numbers for the PAC lobbyists), and other DNC materials.

This is the third release from the hack. The first went public on June 15 in response to a Washington Post story from the previous day in which it was announced that the DNC, and perhaps Hillary Clinton’s campaign itself, had been hacked. The hacker released an alleged DNC opposition research file on presumptive GOP nominee Donald Trump on June 15 and also posted a batch of other internal DNC files concerning notes, research on opponents (from both parties), positions on various issues, and information related to DNC donors to a WordPress blog site. In that post, the hacker claimed he was working alone and had been within the DNC’s computer system for a year before getting booted on June 12. He then claimed to have downloaded thousands of documents and passed them to WikiLeaks.

He also mocked the cybersecurity firm CrowdStrike, which had been brought in to handle the DNC hack and analyze its source. CrowdStrike said the hack was likely the work of hackers working with, for, or in collusion with the Russian government, a claim the Russian government denied to the Post. The paper reported that the hack appeared to be Russian, based on tools used in the attack, and that the Russians might be using this to help Trump.

The DNC has never confirmed the authenticity of the documents, but metadata associated with them, and some of the information within them, points to their authenticity. The DNC declined to comment on Thursday but said in a statement sent to Mother Jones after the hack was first revealed that it was all the work of the Russian government.

“Our experts are confident in their assessment that the Russian government hackers were the actors responsible for the breach detected in April, and we believe [it] may be a part of a disinformation campaign by the Russians,” a senior DNC official said.

In an interview with Vice News’ Motherboard on June 21, the hacker claimed he was working alone and was Romanian, not Russian. That same day, the hacker posted 261 new documents, including research on presidential candidates and talking points on Clinton controversies such as Benghazi.

On June 22, the hacker modified his Twitter account to allow questions to be sent via Twitter’s direct message system, saying he would answer them all at once. The hacker posted those answers Thursday in a post titled “FAQ FROM GUCCIFER 2.0”:

The hacker also said he hopes he doesn’t get caught by the FBI, “but it won’t be that easy to catch me.” The FBI hasn’t responded to a request for comment on Thursday.