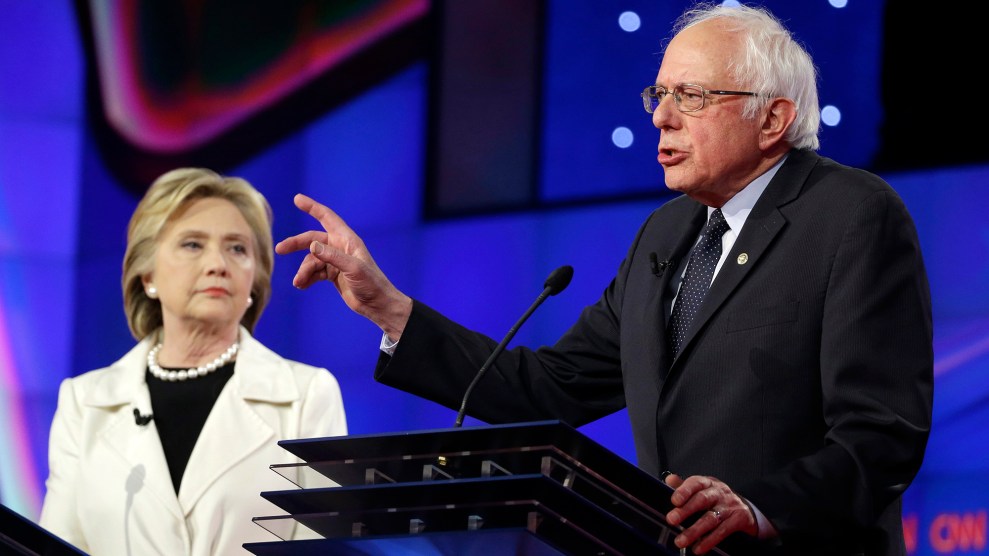 As Hillary Clinton moves to unite the Democratic Party behind her presidential candidacy, her campaign is hoping a progressive party platform drafted this weekend will win over recalcitrant supporters of Bernie Sanders. But even though a number of top liberal priorities made it into the platform, Sanders says the fight over the party’s policy positions is not over yet—and, by extension, neither is the political battle for the support of the party’s left flank.

The draft platform embraces many progressive goals, including long-shot proposals that liberals have pushed for years. The platform supports a $15 minimum wage and an end to the death penalty. (Clinton supports the death penalty in rare cases.) It calls for a modern-day version of the Glass-Steagall Act of 1933, which erected a wall between commercial and investment banks until President Bill Clinton signed its repeal in 1999. It aims to impose a surtax on millionaires, expand Social Security, and repeal the anti-abortion Hyde Amendment.

Sanders had a significant say in the drafting process. He appointed five members of the 15-member Platform Drafting Committee. The Clinton campaign appointed six, and the Democratic National Committee chairwoman, Debbie Wasserman Schultz, chose four. The draft was approved in St. Louis by 14 of the 15 members. One Sanders appointee, Cornel West, abstained.

The Clinton campaign, eager to win over Sanders supporters, quickly praised the platform. Clinton senior policy adviser Maya Harris called it “the most ambitious and progressive platform our party has ever seen” in a statement issued Saturday, and one that “reflects the issues Hillary Clinton has championed throughout this campaign.”

Sanders, on the other hand, was more tepid in his evaluation. In a statement released Sunday, he called it “a very good start,” but added that “there is no question that much more work remains to be done by the full Platform Committee when it meets in Orlando on July 8 and 9″—the next step in the process before the delegates vote on the platform at the Democratic National Convention that begins July 25 in Philadelphia. Sanders points to several priorities that were left out of the platform, including a ban on fracking, a carbon tax, and a provision opposing a congressional vote later this year on the Trans-Pacific Partnership (TPP) trade agreement. On these issues, Sanders says, the fight is not over yet. “We intend to do everything we can to rally support for our amendments in Orlando and if we fail there to take the fight to the floor of the convention in Philadelphia,” he said.

Sanders noted that Clinton’s appointees to the Platform Drafting Committee voted down a requirement that the United States run entirely on clean energy by 2050. The Clinton campaign, by contrast, praised the platform’s “ambitious” goal of “generating 50 percent of our electricity from clean sources within a decade.” On trade, Sanders’ slammed the decision by Clinton allies on the committee who voted down the anti-TPP provision. The Clinton campaign touted a different provision that did make it into the platform’s trade language, which calls for prioritizing workers’ rights, labor rights, and the environment. (Clinton now opposes TPP, but while it was still being hammered out, she called it “the gold standard in trade agreements.”)

“An amendment adopted yesterday further emphasized the fact that many Democrats oppose the Trans-Pacific Partnership because ‘the agreement does not meet the standards set out in this platform,'” Harris, the Clinton aide, said in her statement. “Hillary Clinton is one of those Democrats, and has been strongly and unequivocally on the record opposing TPP. Just this week, she said, ‘We will defend American jobs and American workers by saying “no” to bad trade deals and unfair trade practices, including the Trans-Pacific Partnership.'”