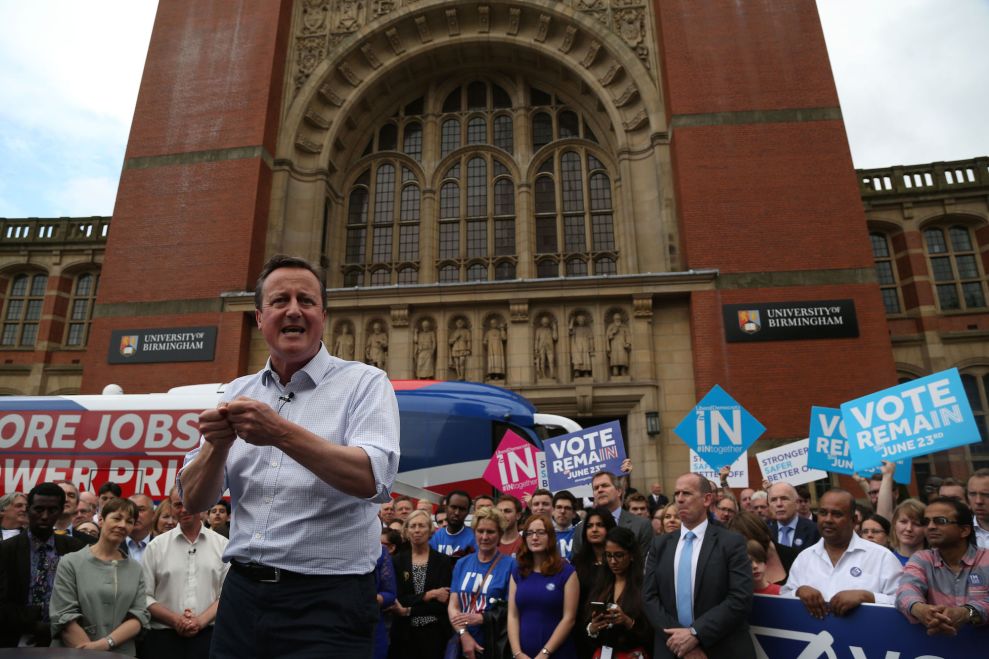 Prime Minister David Cameron attends a rally in Birmingham ahead of the EU referendum. Press Association/AP

Update: British voters have decided to withdraw its membership in the EU. Though ballots are still being counted, numerous news outlets including the BBC, Sky News, and the New York Times have called the vote in favor of leaving the EU.

The landmark referendum, which in recent days has been deemed too close to call, came after months of intense clashes among Britons over the country’s identity and the value of its EU membership. One poll on Tuesday showed 45 percent of voters wished to remain and 44 percent supported leaving.

In 2013, Prime Minister David Cameron ran for reelection promising to hold such a referendum, bowing to mounting pressure from Eurosceptic lawmakers in his own Conservative party who complained that Britain hadn’t held a vote on its EU membership in decades. To Cameron’s consternation, the Brexit debate ushered in a highly contentious split within the British public and nearly universal condemnation from world leaders, economists, and corporate heads.

International leaders, including President Barack Obama, have warned against Britain withdrawing from the EU, citing destabilizing economic consequences if the vote comes out in favor of a Brexit. Several high-profile companies took out full-page ads in British newspapers warning of dire economic consequences that could follow withdrawal, including a period of deep uncertainty and low investment.

Those who support Britain’s departure focus on reclaiming the British economy from the various shortcomings of the EU, including what they perceive as an ineffective governing body. They argue that membership has been too costly for too little in return. Brexit supporters, many of whom identify with the right-wing United Kingdom Independence Party, also tend to oppose immigration and are concerned with securing Britain’s borders.

Advocates for continued membership argue that the cost of staying in the EU is negligible compared to the overall trade and economic benefits, and that retaining membership is crucial to protect Britain’s standing in the world. Earlier this week, three of Britain’s top economic institutions released a joint statement urging voters against leaving, predicting that Britain would “almost certainly” be worse off if it were to vote “yes.”

The “Remain” camp have also condemned fear-mongering rhetoric from the UKIP and others pushing to leave the EU. In a televised debate on Tuesday, London mayor Sadiq Khan and Scottish Tory leader Ruth Davidson slammed Boris Johnson, the former London mayor and leading Brexit proponent (though not a UKIP member), for lying about Turkey’s potential entrance to the EU to stoke fears regarding border security and terrorism.

The killing of pro-EU Labor MP Jo Cox, who was stabbed and shot to death on June 16 by a man allegedly shouting “Britain first,” put a direct spotlight on extreme nationalists’ role in the debate. Polls taken in the aftermath of Cox’s shocking murder appeared to show a weakening of the Brexit movement.

The EU has failed us all. We must break free of the EU and take back control of our borders. pic.twitter.com/CIHN8ifQHg

“Brits don’t quit,” Cameron said in a speech outside 10 Downing on Tuesday. “We get involved, we take a lead, we make a difference, we get things done.”