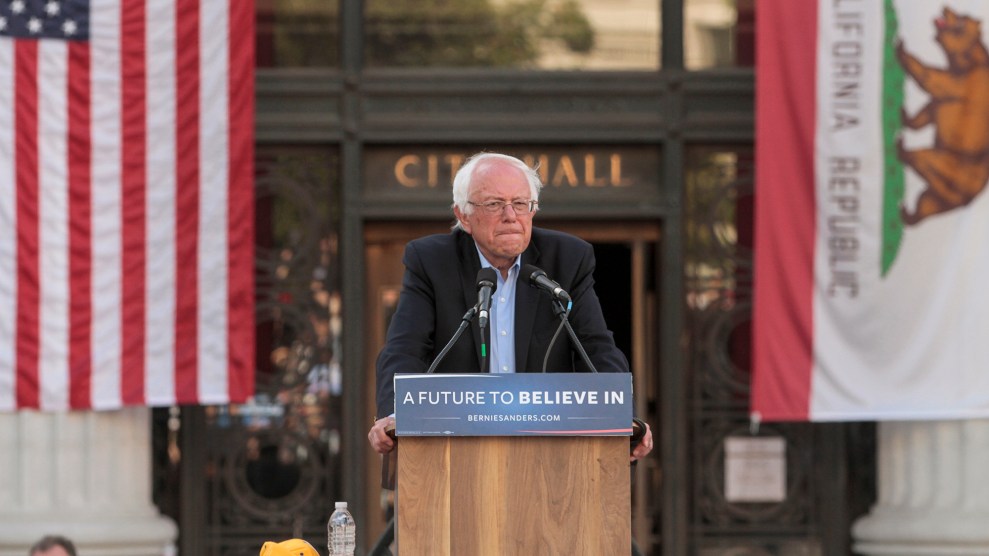 For this, Sanders can thank a system that the party’s moderate wing hoped would fend off liberal insurgents—in other words, candidates like him.

Depending on the state, Democrats hold open primaries and caucuses (open to any voter), closed contests (open only to registered Democrats), or something in between (as in California, where Democrats and independents but not Republicans can vote in the Democratic primary). On June 7, in addition to California, independent voters can partake in Democratic primaries in Montana and South Dakota and in North Dakota’s caucuses. New Jersey’s primary is closed, but independents can change their registration at the polls. The only state on Tuesday that will limit its rolls to previously registered Democrats is New Mexico.

Throughout the primary season, Sanders has performed well in states with open primaries, thanks to the support of voters who eschew both major political parties, as the senator from Vermont did until running for president. But Sanders has struggled in closed primaries—in fact, he has won just one (Oregon’s) out of 10 so far this race. Facing an uphill climb in New York’s primary in April—a state with particularly rigid closed primary rules—he began to assail closed primaries, and he has said he wants to allow independents to vote in all Democratic primaries, a change he suggested might begin at next month’s convention.

But progressives did not always favor open primaries—quite the opposite. And as Sanders advocates a revised primary system, the boomerang effect of the creation of open primaries in this year’s race serves as a reminder that changes to party rules often have unintended consequences.

In the 1970s and 1980s, it was moderates who wanted to open up the nomination process to independent voters. In the 1972 Democratic presidential race, the first to feature the modern primary system in which the nomination was largely determined by the results of primaries and caucuses held in the states, the voters nominated Sen. George McGovern of South Dakota. A staunch liberal, McGovern went on to lose in a blowout to Richard Nixon. The lesson for many Democratic Party insiders was that Democratic voters could not be trusted to pick winning presidential candidates. “There were plenty of regrets” after 1972, says Elaine Kamarck, an expert in electoral politics at the Brookings Institution. “Regrets would be an understatement.”

In the 1980s, moderate Democrats tried to rehabilitate their party in the more conservative Ronald Reagan era by moving it to the right. The main engine of this effort was the Democratic Leadership Council, made up of elected officials who supported more moderate policies and presidential nominees. “We did want independents voting in the primaries, because the thought was that independents were a moderating factor,” recalls Kamarck, who worked with the DLC in the late 1980s and early 1990s. At the same time, the more liberal wing of the party in the 1980s encouraged states to adopt closed primaries “to maximize the meaningful participation of Democratic voters” and prevent their preferences from being diluted by moderate independents, says Andrew Busch, a professor of government at Claremont McKenna College in California. As recently as a few years ago, progressives continued to fear that open primaries would lead to moderate candidates.

“What’s kind of ironic about this is that the closed primaries and the superdelegates are being kind of thrown into the same pot, in a way, by Bernie Sanders and others who are dissatisfied with the system. But historically they represented opposite impulses.”

The assumption was that independents were moderates who fell between the ideologies of the two major parties: They found Democrats too liberal and Republicans too conservative. But that’s less and less the case. This year, many independents are populist progressives—to the left of mainstream Democrats like Hillary Clinton—who are simply fed up with the system and with both parties. These voters have been Sanders’ most reliable supporters, and he has argued that open primaries help the party nominate a candidate who can win independent voters in November.

Sanders’ second objection to the Democratic primary process is the role of superdelegates, elected party officials and longtime members who get a vote at the convention and are not bound by the outcome of the primaries in their home states. The party began using superdelegates, which today make up about 15 percent of the total number of delegates, in 1984, partly to give party insiders a larger role in the process. Sanders complains that hundreds of superdelegates announced their support for Clinton at the beginning of the race, before the voting even began, and calls this an “anointment” and “undemocratic.” (Superdelegates can always change their vote to go along with the will of the people, as they did in 2008 when many switched from Clinton to then-Sen. Barack Obama.)

“What’s kind of ironic about this is that the closed primaries and the superdelegates are being kind of thrown into the same pot, in a way, by Bernie Sanders and others who are dissatisfied with the system,” notes Busch. “But historically they represented opposite impulses.” Progressives wanted closed primaries to protect the will of liberal party members, while the establishment introduced superdelegates to regain party influence and protect against the power of the party’s liberal wing.

Sanders’ reform ideas will be tough to implement because most primary election rules are established at the state level, not by the Democratic National Committee. But Busch also questions the wisdom of adopting Sanders’ proposed reforms. “I can imagine in four or eight years you could have Elizabeth Warren running and doing quite well in the closed primaries, and someone like Jim Webb”—a moderate Democrat—”would probably be the one who would benefit more from open primaries,” he says. In other words, there’s no assurance that opening primaries and doing away with superdelegates would result in a more progressive candidate down the line. Back in 1972, Busch says, the biggest beneficiary of Democratic open primaries was the segregationist George Wallace.

But there’s another reason Sanders’ reforms may not be welcomed: More than any recent year, 2016 has demonstrated that parties can be hijacked by outsider candidates. Just ask the Republicans. “A party is basically a brand,” says Kamarck. “Look at the damage [Donald Trump’s] going to do to that brand. It will take years for women to feel good about that party. It will take years for Hispanics, as the fastest-growing piece of the American electorate, to feel good about that party…The Republican side is the most dramatic example of a party that has given up too much control over its nomination process.” In fact, some Republicans want their party to move away from open primaries, blaming independents for Trump’s rise (though his support is not as concentrated among independents as Sanders’).

“When the dust settles from this, the lesson is not going to be that we did not have enough openness in the system; I think the lesson is going to be quite the opposite,” she predicts. “Because, frankly, there’s nothing that prevents the Democrats from having a Donald Trump either.”