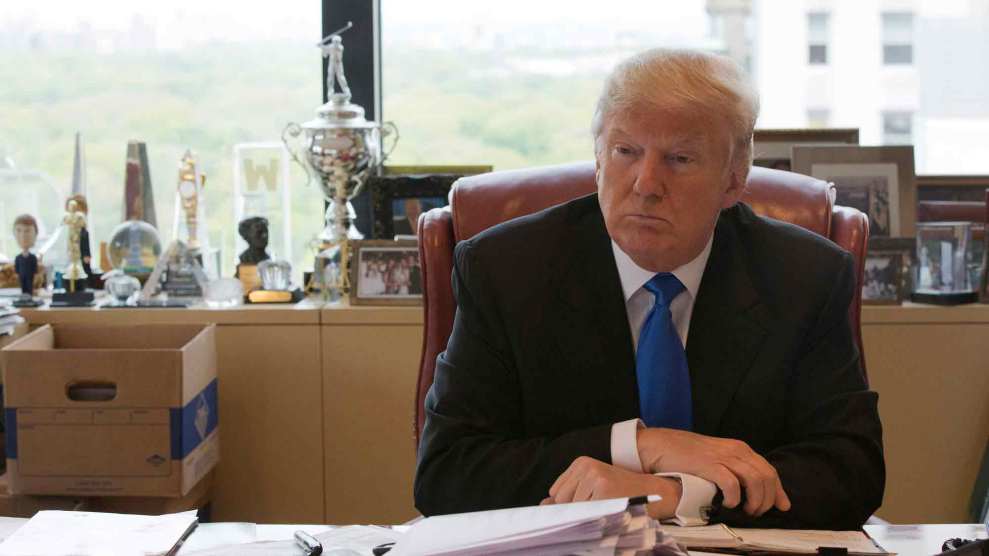 For most major presidential campaigns, it is a routine act: You conduct opposition research on your own candidate. The reason is obvious; campaign officials and candidates want to know what they might have to contend with once the you-know-what starts flying. But not Donald Trump. At least not at the start of the campaign that would lead to him becoming the presumptive GOP nominee. According to a source with direct knowledge, when Trump was considering entering the presidential race early last year, his political advisers, including Corey Lewandowski, who would become his campaign manager, suggested that he hire a professional to investigate his past. But the celebrity mogul said no and refused to pay for it.

Marital infidelity, connections to mob-related persons, bankruptcies, the hiring of undocumented workers, policy flip-flops, deals gone bad, legal troubles—Trump’s life is an opposition researcher’s dream. That was no secret to his political lieutenants, who prior to his announcement discussed the need to conduct a deep dive into the tycoon’s background. The point was to do more than Google searches and perusing of the many books written on Trump—and to instead mount a full forensic examination of everything Donald. Especially before anyone else did. (Trump’s aides had heard a rumor that wealthy conservative donors, perhaps including the Koch brothers, were underwriting a private opposition research effort aimed at the former reality TV star.)

“Everyone does this,” says a former Mitt Romney aide. “I don’t know a campaign that didn’t. It’s a standard procedure.” Political research firms specialize in this sort of work. “It’s an off-the-shelf service they provide,” this aide notes. “For X dollars, you get a different level of digging. I’ve never known a campaign that didn’t do this. After all, you’re expected to know your own record. Any responsible campaign would do that.”

One subject on the mind of Trump’s advisers was Jeffrey Epstein, the finance mogul who was arrested in 2006 and subsequently pleaded guilty to having solicited paid sex with a minor. He ultimately served 13 months in prison and had to register as a sex offender. (Several years ago, alleged Epstein victims filed a lawsuit against the US government claiming Epstein received too sweet a plea bargain.) Trump’s advisers didn’t know of anything in particular to worry about. But they knew Trump had been linked to his fellow Palm Beach resident. In 2002, Trump had said of Epstein, “I’ve known Jeff for fifteen years. Terrific guy. He’s a lot of fun to be with. It is even said that he likes beautiful women as much as I do, and many of them are on the younger side. No doubt about it—Jeffrey enjoys his social life.” Epstein had occasionally visited Mar-a-Lago, Trump’s estate and club down the road from Epstein’s mansion. Trump also had flown on Epstein’s plane and had dined at his house. And Virginia Roberts, an alleged Epstein victim who tried to join the civil lawsuit, maintaining that Epstein kept her as a sex slave for several years when she was a teenager, was working at Mar-a-Lago as a changing room assistant when she was recruited, at age 15, to be a masseuse for Epstein. (A judge recently denied Roberts’ bid to become a plaintiff in the case.)

Trump has downplayed his association with Epstein. But these connections would be enough to cause any senior campaign staffer to want a full examination. “This vetting process was not for the purpose of looking at Epstein specifically,” a Trump insider says. “It was to be an audit to see what could be found on anything.” (Conservatives have pointed to Bill Clinton’s friendship with Epstein—he often was a passenger on Epstein’s private plane—as possible ammunition to be used in the 2016 campaign against Hillary Clinton.)

Though Trump would not authorize an extensive research effort to identify what oppo might be most harmful to his candidacy, his campaign did prepare responses to obvious lines of attack against the billionaire. Mother Jones reviewed one campaign memo outlining possible replies to expected assaults, but most of these topics were policy and political matters already in the public realm. What about Trump’s 1999 proposal to raise taxes on the well-to-do? Trump merely had proposed a one-time fix designed to erase the national debt, a move that showed that Trump possessed the foresight to see that deficits would become a major problem. What about his past donations to Democrats? Trump was supporting incumbents of both parties as an act of civic participation, and since 2011 he has only contributed to Republicans. What about Trump manufacturing his clothing line in China? He had played no role in the decision to outsource, and China was picked because US regulation and red tape made it too expensive to manufacture goods in the United States. What about his failure to serve in the military? Trump had received student deferments, and as a graduate of a military academy he has been a strong proponent of the US military and veterans.

This memo covered numerous issues. What about the bankruptcies filed by his companies? Trump has never filed for personal bankruptcy. What about Trump’s previous support for universal health care? Trump has always called for a market-based system and has been an ardent opponent of Obamacare. What about Trump saying he has a plan to defeat ISIS but refusing to provide details? Trump does not want to tell ISIS in advance how he will defeat it; that would put US soldiers at risk. What about Trump’s support for the TARP bailout of the big banks? Trump believed TARP was necessary to stabilize the global financial system but came to conclude the program was poorly administered. What about Trump’s previous support for Jeb Bush, whom he once called the kind of political leader the United States needs? The Bush presidencies have been failures, Jeb Bush governed Florida as a typical politician who bowed to lobbyists and special interests, and it’s time to make America great again.

These were talking points designed to deal with the existing public record—not responses crafted to address new revelations. At the beginning of his presidential crusade, Trump would not allow his aides to prepare for that. The candidate, who now refuses to release his income taxes, did not want his own campaign scrutinizing his past. He was not willing to be transparent—not even for his own team.