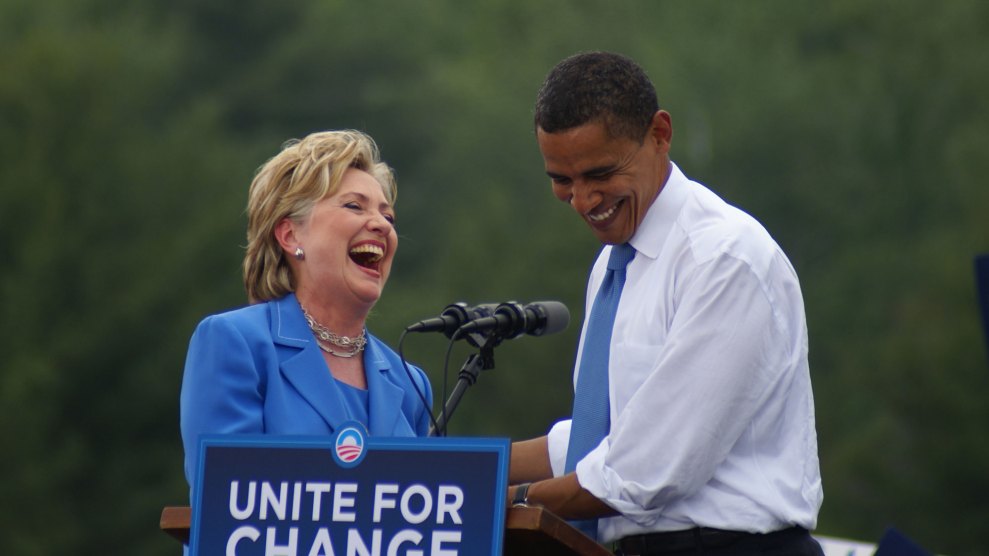 After last weekend’s chaotic Nevada Democratic convention, where supporters of Bernie Sanders tossed chairs and later sent death threats to the state party chair, leading Democrats called on the Vermont senator and his supporters to settle down. They wanted Sanders backers to quit complaining about a “rigged” nominating process and to lay off the threat to take the fight to the July convention if—as looks almost certain—Hillary Clinton locks up the nomination next month. At the Daily Beast, Michael Tomasky chastised the Vermont senator for not rebuking his supporters and asked if Sanders “wants to destroy the Democratic party.” He depicted Sanders and his wife, Jane Sanders, as Thelma and Louise, driving off a cliff.

But, in a way, the party has been at this precipice before. The fretting over what a Sanders schism might mean for the party’s chances in November against Donald Trump is not without justification. And many Democrats had cause to freak out over a New York Times article that reported that Team Sanders was bent on causing Clinton, the likely Democratic nominee, much harm in the weeks up to and at the convention. But Sanders’ decision to push for the Democratic nomination all the way to the convention is not unprecedented. This is sort of what happened the last time there was a Democratic presidential primary, when Clinton was in the never-give-up role.

The comparison isn’t perfect. At this point in 2008, Clinton, running second to then-Sen. Barack Obama, had a statistically better shot at the nomination than Sanders does now. The gap in pledged delegates was much smaller, and there was an unsettled issue of how harshly Michigan and Florida would be penalized for holding early primaries against the party’s orders. (Clinton won both states, Obama had chosen not compete, and it was unclear how many delegates each state would have at the convention.) Still, Clinton was a long shot, and Obama backers wanted her to go away quietly, or at least to quit attacking the likely nominee. She and her supporters chose the opposite course, pitching superdelegates to switch sides based on a racially tinged argument that Clinton would fare better than Obama in the general election.

Here are some flashbacks to that tense period in 2008:

May 8: After narrowly beating Obama in Indiana, Clinton says, “Senator Obama’s support among working, hard-working Americans, white Americans, is weakening again.” This was an argument that superdelegates should support her because her black opponent wouldn’t be able to win white voters in November.

May 9: Sixteen pro-Clinton House members send a letter to superdelegates touting Clinton’s “ability to connect with voters we must deliver in the fall, including blue collar Democrats who can sway this election as they have in the past.”

May 23: Hillary Clinton tells the Sioux Falls Argus Leader that she’s staying in the race because anything can happen. “We all remember Bobby Kennedy was assassinated in June in California,” she says. She pledges to fight until the convention and challenges Obama to more debates. Obama supporters howl at Clinton’s fear tactic.

May 31: The Democratic National Committee’s Rules and Bylaws Committee meets to settle the fate of the Michigan and Florida delegates. It decides to cut both states’ delegations in half—a death blow to Clinton’s chances. Angry Clinton supporters outside the meeting tell the Huffington Post‘s Sam Stein that an ex-Senate majority leader (Tom Daschle) had “rigged” the South Dakota primary, that Obama was in the pocket of a billionaire megadonor (George Soros), and that his base of supporters was little more than an “anti-woman cult.”

Early June: Rumors circulate of a secret video, known as the “whitey tape,” in which Michelle Obama supposedly shares a stage with Nation of Islam leader Louis Farrakhan and the Rev. Jeremiah Wright and denounces white people. According to Game Change, the Clinton campaign clung to the video as its last best hope: “[Top Clinton aide Sidney] Blumenthal was obsessed with the ‘whitey tape,’ and so were the Clintons, who not only believed that it existed but felt that there was a chance it might emerge in time to save Hillary. ‘They’ve got a tape, they’ve got a tape,’ she told her aides excitedly.”

There was no tape, and Clinton dropped out of the race on June 4, shortly after the last Democratic primary. On June 27, she and Obama held their first joint appearance together, in Unity, New Hampshire.

Sanders may yet pursue a different course. (His aides are talking about trying to transform the Democratic Party and its rules.) But for now, his decision to stay in the race and keep the pressure on the front-runner is not extraordinary. It’s déjà vu.