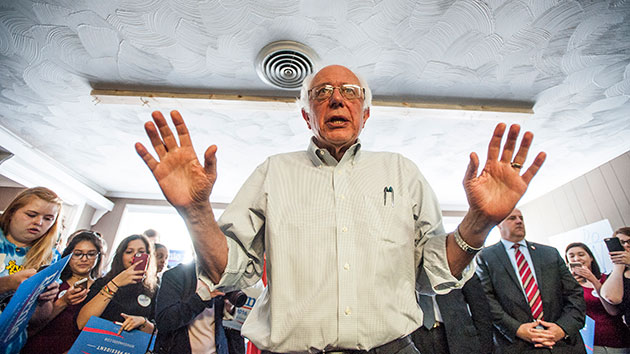 An estimated 27,500 people in Los Angeles, 20,000 in Seattle, and 18,500 in the Bronx: Bernie Sanders is sparking some of the biggest crowds in primary history. For millions across the country, his message is clearly resonating. It’s refreshing to hear someone running for the country’s highest office finally articulate (without any prodding!) core progressive policies: from taking on Wall Street to reforming campaign finance to making college affordable—the list goes on. So it stunned many progressives to hear Sanders attack Philadelphia’s plan to tax sugary drinks; he called soda taxes regressive and came out swinging.

Like health advocates across the country, I think Sanders got it wrong: These taxes in fact reflect the progressive values he holds dear.

It’s the very communities Sanders says he’s trying to protect that have been at the beating heart of campaigns for soda taxes.

As a resident of Berkeley, California, the first city in the United States that has passed a tax of this kind, and as someone who has been working to sound the alarm on the epidemic of diet-related illnesses for years, I have had a ringside seat at the battle against Big Soda. And I think that if Sanders had firsthand knowledge of the fight, he too might be moved to see these taxes differently.

Sanders claims soda taxes will “disproportionately affect low-income and middle-class Americans.” But here in Berkeley, as with other places soda taxes are being proposed, it’s the very communities Sanders says he’s trying to protect that have been at the beating heart of the campaigns.

When Berkeley took on the soda tax, the campaign connected people from all walks of life. The NAACP, Latinos Unidos, the entire school board, every single city council member, and dozens of other groups were all united in their support. Across race, class, and age, the community came together against a deluge of Big Soda money to defend a strategy to help take on one of the biggest public health crises of our time.

Supporters of these taxes understand they are “regressive” only in the most simplistic sense. As with any tax that could lead to higher prices to consumers, from cigarettes to carbon, one could allege they make the poor pay disproportionately more. In Philadelphia, the 3 cent per fluid ounce excise tax on sugary drinks levied on distributors could raise a $0.99 12-ounce Coke to $1.35 if the tax were passed on entirely to consumers. For a $7.25 hourly minimum-wage worker, that price hike would therefore be a bigger relative burden than for, say, the CEO of Coca-Cola who made roughly $7,000 an hour last year.

But it’s wrong to leap from that simplistic calculation to call these taxes an encumbrance on the poor. It’s not like this tax is for something people have to buy—a tax, for instance, on water or fruits and vegetables. No one needs Coca-Cola to survive and, in fact, drinking soda is a key driver of serious illness. Indeed, a study of the effect of a soda tax in Philly found that the potential price increase could reduce soda consumption, preventing 2,280 new cases of diabetes and 36,000 new cases of obesity every year. Over the course of a decade, the levy could save the city $200 million in averted health care costs. That’s yuge! as Sanders would say.

Progressives have long understood that one of the ways to take on predatory industries whose products hurt the most vulnerable among us is through consumption taxes—something Sanders understands when he speaks in favor of taxing cigarettes.

So maybe Sanders just isn’t hip to the evidence about the harm caused by sugary drinks. And I get it: Many still don’t perceive soda as being as troubling as tobacco. But the science is in. Long-term, peer-reviewed studies have clearly demonstrated the links between sugary drinks and a wide range of illnesses, from diabetes to heart and liver disease to weight gain—not to mention the damage to dental health. Drinking just one or two sugary drinks a day can increase the chances of developing Type 2 diabetes by 26 percent. And reducing soda consumption is increasingly seen as the best first step to halting weight gain. (I experienced this myself when I cut out sugar-sweetened beverages as a cash-strapped grad student. No longer able to afford my habit of multiple Snapple drinks a day, I went cold turkey and dropped 15 pounds. Save for my two pregnancies, I have never gained them back.)

We also know the burden of these diet-related diseases is not evenly experienced by race and class—and that’s putting it mildly. I bet the CEO of Coca-Cola doesn’t live in a community where 1 in 2 residents either have diabetes or are on the way to being diagnosed with it, as is the case in many low-income communities nationwide. Consider this shocking fact: According to the American Diabetes Association, African Americans and Latinos are 70 percent more likely to be diagnosed with diabetes than their white peers. In other words, the potential benefits of these taxes will be greater for the communities whose health has been most undermined by soda.

The potential benefits of these taxes will be greater for the communities whose health has been most undermined by soda.

The most powerful moments of the Berkeley versus Big Soda campaign were hearing community members describe their direct experience with the costs of diabetes: from forfeited wages because of days spent caring for parents or kids to lifelong health problems including heart disease, comas, infertility, vision loss, insulin replacement, even amputations. (Yes, amputations.) At least 73,000 lower-limb amputations were performed nationwide in 2010 on people with diagnosed diabetes. The economic toll of this rising epidemic cannot be stressed enough.

These taxes are beneficial—and reflect progressive values—in another way: Revenues reaped can disproportionately benefit a community’s most at-risk residents. Here in Berkeley, our tax on distributors (one penny per fluid ounce) is on track to bring in $1.5 million annually, which will be used to support health education and diabetes prevention. In Philly, the mayor would use the revenue to fund universal pre-K.

The other charge Sanders makes against these taxes is that they are job killers, leading to “the loss of thousands of good-paying jobs.” There is no evidence this would be the case. Here in Berkeley, where the soda tax was implemented March 1, 2015, there’s been no indication of jobs lost.

It’s perplexing to me that Sanders would embrace an anti-soda-tax stance. His particular volleys—”It’s a jobs’ killer!” “It’s regressive”—are straight from the pages of the beverage industry’s PR playbook. And they echo tobacco industry misinformation that came before them. When cigarette taxes were first proposed, the industry cried foul, too, claiming the poorest people would be most burdened by rising costs, that jobs would be lost. Instead, we’ve seen one of the most positive public health success stories of a generation as smoking rates have plummeted.

Sanders argues that instead of soda taxes we should tax corporations more. Today’s effective corporate tax rate, he notes, is just 22.8 percent, down from 31.7 during the Reagan years and resulting in the loss of an estimated $166 billion every year. What progressive would disagree with Sanders here? But I’m not sure why Sanders presents these positions as either/or. Soda taxes are just one tool in progressive toolbox to take on corporate power and address the devastating epidemic of diet-related illnesses.

And what a tool they can be. The soda industry knows this. That’s why its trade group, the American Beverage Association, has spent an estimated $64.6 million since 2009 fighting soda taxes, according to analysis from the Center for Science in the Public Interest. (That doesn’t even include this year’s lobbying spend in California’s capital to fight a proposed statewide tax and more going to undermine fledgling efforts in Oakland, California, Philadelphia, and beyond). In Berkeley, a city of 116,000 people, the trade group spent $2.4 million in an onslaught of negative ads, misinformation, and paid supporters. Big Soda even got in-kind donations from Landmark Theaters to play anti-tax ads before movies in local theaters.

Despite this big spend and thanks to an incredible community effort—the kind of people power I would have thought Sanders would love—we won, and we won big. (Even San Francisco—where the industry outspent the community 31 to 1, shelling out $9.2 million to oppose the tax—55.6 percent of voters supported it, with the vote only failing because it fell short of the two-thirds needed there.)

I wonder whether things would be different if Sanders had been at the Berkeley versus Big Soda headquarters on election night. There, under the bare bulbs of a cavernous room on the main strip of downtown Berkeley, hundreds stood shoulder to shoulder watching as the election results rolled in—and cheering and hugging as the number of precincts crept up.

We stood, a community united, listening to what this campaign had meant to the people at the heart of it: A pediatric dentist recounted how the campaign had transformed her despair at the deterioration of dental health into determined action. A young Latino organizer whose aunt had been hospitalized that very evening from complications from diabetes, shared that the effort had given him a tangible way to use his agony about the illness ravishing his family to make a difference. An African American reverend shared how the grief of losing his 29-year-old son to diabetes propelled him to work tirelessly for the campaign; no other father should lose a son to this disease, he said.

If Sanders had been at the Berkeley soda tax HQ on election night, listening to these voices and more like them, I wonder if he, too, would have been brought to tears—and, whether he, too, would have joined in the thunderous applause as the final results came in. Despite Big Soda’s big spending, the people had triumphed. The final tally: 76.2 percent in favor of the tax.

Just like the city had done in setting policy precedent by being the first to voluntarily desegregate its schools, and to provide curbside recycling, to create curb-cuts for wheelchair accessibility, now Berkeley had passed the first tax on sugary drinks in the United States. There will be more.

Communities across the country are taking up similar taxes, from Philadelphia to Boulder, Colorado, to Oakland. In response, Big Soda will redouble its efforts to confuse the public, distort the science and undermine the credibility of advocates—and they’ll undoubtedly take on the dual mantras Sanders echoed. They have nearly bottomless pockets to do so. (Coca-Cola alone spent $3.5 billion in marketing in 2014.) But Berkeley has shown that strong coalitions can take on even the world’s largest corporate behemoths. It’s a David versus Goliath battle that any progressive should love.