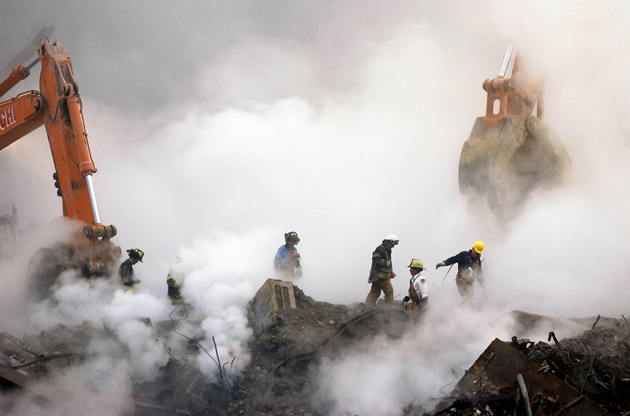 Firefighters make their way over the ruins and through clouds of smoke at the World Trade Center in October 2001. Stan Honda/AP

Earlier this year in the GOP presidential race, Ted Cruz took a poke at Donald Trump by derisively referring to “New York values.” The jab sparked an uproar, and the celebrity tycoon blasted Cruz in response, citing New York City’s heroic response to the 9/11 attacks. As the two face off before Tuesday’s New York primary, Trump has been reminding Empire State voters that Cruz dissed them. But he has not pounded Cruz for ducking an effort to help the heroes of 9/11—the rescue and recovery workers who years afterward have dealt with severe health issues. When legislation was pending in the Senate last year to assist these workers, Cruz did not publicly support it. This ought to be ripe material for Trump to exploit. Except for one thing: Trump, too, did nothing to help this measure move through Congress.

Here’s the deal. Last year, the James Zadroga 9/11 Health and Compensation Act—which provided medical coverage to workers who searched for victims at the site of the attack and who cleared the debris—expired. These workers were exposed to a variety of toxins, and hundreds of them have died from a range of afflictions, including various cancers. (Zadroga was a a New York City cop who died of a respiratory disease attributed to his participation in the rescue and recovery operations.) House and Senate members proposed a $3.5 billion extension that would last for 75 years. New York officials pleaded with Congress to pass the bill. Former Daily Show host Jon Stewart joined former rescue and recovery workers in lobbying Congress to adopt the legislation.

Many legislators in the House and the Senate heeded the call. Sixty-eight senators co-sponsored the bill, which had been introduced by Sen. Kirsten Gillibrand (D-N.Y.). This list included 23 Republicans, but not Cruz.

Last August, Richard Alles, a deputy fire chief and board member of Citizens for the Extension of the James Zadroga Act, wrote to Cruz and asked if he would support the bill—and if he would sign the bill if he were president. Cruz didn’t respond. Months later, Alles tried again. Still, nothing from Cruz.

Meanwhile, Republican leaders refused to move the bill forward, and it became a victim of partisan maneuvering involving a big transportation spending bill. Eventually, the 9/11 bill was stuffed into a must-pass spending bill at the end of last year, and Congress approved this package. In the Senate, the vote was 65 to 33. Cruz voted no. Of course, he and other GOPers had reasons to oppose the overall spending measure. And this week, Cruz told Mother Jones, “I very much supported the Zadroga Act, it was just rolled into a giant omnibus that required funding Obamacare, funding President Obama’s illegal amnesty, funding the president’s foolhardy plan to bring tens of thousands of Syrian Muslim refugees who could be ISIS terrorists to America. So I voted against the omnibus because I oppose those policies. I would have enthusiastically voted for the Zadroga Act as a freestanding bill.” But Cruz had not co-sponsored the 9/11 legislation. And he had ignored requests to explain his position.

Cruz’s failure to publicly support the 9/11 rescue and recovery workers certainly left him vulnerable to criticism from New Yorkers and others. After Cruz in January made his crack about “New York values” and tried to recover by praising New York cops and firefighters, Rep. Peter King (R-N.Y.) called him a “fraud” and pointed to his lack of public support for the Zadroga Act. And Harold Schaitberger, president of the International Association of Fire Fighters, declared, “He left the 9/11 responders behind.”

So here was a ready-made issue for Trump to use against Cruz during the New York primary. Yet Trump had just as lousy a record on the Zadroga Act. Advocates for the bill have slammed the GOP front-runner—who often praises cops and hails New York City’s 9/11 efforts—for doing nothing to help pass the measure. As ABC News reported in January:

Facing the expiration of the James Zadroga Act in October—a law passed in 2010 to fund health care for more than 70,000 sick first responders and the 9/11 Victim Compensation Fund—Alles and other advocates asked all the presidential candidates to support a bipartisan bill to permanently fund the programs.

Trump’s campaign did not return multiple letters and calls requesting his support for reauthorizing the Zadroga Act last fall, said Alles, who drafted the letters to the candidates as a board member of the group Citizens for the Extension of the James Zadroga Act. The campaign also did not respond to requests for comment from reporters covering the story at the time.

“It frustrated the hell out of me because he’s such a supporter of law enforcement,” said Anthony Flammia, a retired NYPD officer and registered Republican who said he hasn’t settled on which presidential candidate he’ll be voting for. “He didn’t even comment on it.”

Trump’s campaign would not respond to repeated requests from ABC News for comment.

Trump has repeatedly clashed with Cruz rhetorically over “New York values” and has attempted to use 9/11 as a political weapon against the Texas senator. But when the matter at hand was whether to provide assistance to those who responded heroically to the horrific attack, there was basically no difference between the two. They each told these New Yorkers: Fuggedaboutit.