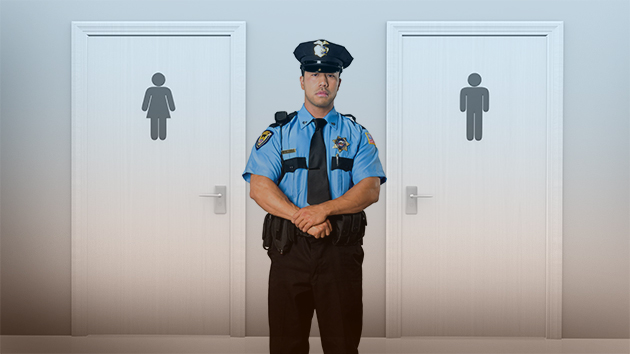 Two days after North Carolina enacted one of the country’s most sweeping anti-LGBT laws, The New Yorker‘s Andy Borowitz imagined the scene at the state capitol in Raleigh: In a “historic ceremony,” he wrote, “North Carolina Governor Pat McCrory swore in a thousand officers charged with enforcing the state’s new public-bathroom regulations.” The new law bars people from using public restrooms that don’t align with the sex on their birth certificates—a measure proponents say protects privacy but critics describe as a thinly veiled attack on transgender people.

Borowitz continued: “Speaking to the newly graduated bathroom-enforcement cadets, McCrory impressed upon them the gravity of their responsibility. ‘You are the thin blue line charged with protecting the gender sanctity of North Carolina’s bathrooms,’ he said. ‘Be careful out there.'”

“‘You are the thin blue line charged with protecting the gender sanctity of North Carolina’s bathrooms. Be careful out there.'”

Of course, North Carolina hasn’t really unleashed an army of “bathroom-enforcement cadets” to guard public restrooms like bouncers at a club. But Borowitz’s satire got me thinking: How will the state try to enforce its new law, which is the first of its kind to be enacted in the United States? So I picked up the phone and started calling some North Carolina police departments to find out.

“That’s a very interesting question. We don’t have police officers sitting at public bathrooms all day long,” a spokesman at the Raleigh Police Department told me with a laugh. Over in Greensboro, the state’s third-most-populous city, I received a similar answer. “We would respond if we received a complaint. It’s not like we would be standing guard at bathrooms,” said Susan Danielsen, a spokeswoman for the local police department, also suppressing a laugh. At the Wilmington Police Department, spokeswoman Linda Rawley said the law struck her as strange. “So that means people have to go to the bathroom with birth certificates? Yeah, that was curious to me.” At the Asheville Police Department, spokeswoman Christina Hallingse noted, “We’re not checking birth certificates. We just don’t have the police power to be able to do that in bathrooms.”

Since the law was enacted March 23, police departments across the state have been working to determine how they will enforce it. In addition to restricting bathroom use, it bans anti-discrimination protections based on sexual orientation. “Our staff, particularly our attorney’s office, is trying to figure out what it all means,” says Damien Graham, another spokesman for the Raleigh Police Department. “We haven’t mobilized our police force in any kind of different way. We’re still digesting.” Public universities like Western Carolina University and the University of North Carolina are also assessing the law to determine how it will affect university policies, spokespeople from both universities said.

“We’re not checking birth certificates. We just don’t have the police power to be able to do that in bathrooms,” an Asheville police spokeswoman said.

Can police patrol public restrooms? Can they demand birth certificates, or some other form of identification, from those accused of violations? In the law, “these are all completely open questions,” says Cathryn Oakley, a senior legislative counsel for the Human Rights Campaign, an LGBT advocacy group.

And critics of the law say police officers and universities may struggle to find answers within the text of the legislation. “The bill was passed by the state legislature in less than 10 hours and then signed by the governor that very same night with very little debate,” Oakley says. “And so it’s incredibly poorly drafted, leading to all kinds of consequences.” The lack of enforcement guidance in the legislation also suggests “it’s not motivated by solving a real problem,” she says. “If it was, they would have spent more time understanding and actually addressing a problem. Instead they passed a law that is a political statement.”

Some police departments were still checking with their attorneys this week to determine whether they could arrest an individual who used the wrong bathroom. Because it’s a civil law, using the wrong bathroom wouldn’t be considered a criminal violation in itself, Hallingse from the Asheville PD points out. But the law doesn’t lay out civil penalties for the violation, either, says Oakley, so police officers will have to use their best judgment when responding to complaints. Danielsen, the spokeswoman from the Greensboro PD, says officers there will try to respond with the “lowest degree of interaction” possible. “Not every response needs to result in an arrest,” she says.

But even before police officers are called to the scene, there may be room for mishap. Without law enforcement on guard, it will likely be up to bathroom goers to report a problem if they see someone enter the room who doesn’t appear to belong there—and appearances can be deceiving. As the Chapel Hill and Carrboro news site Chapelboro points out, hormone therapy and sex reassignment surgery allow many transgender women to look like biological women, even if they don’t have female birth certificates. “There are blurry lines,” writes Chapelboro‘s Aaron Keck.

“There is absolutely no way to enforce this law. It is an utterly ridiculous law,” said state Rep. Rodney Moore.

North Carolina is the first state to enact a law restricting bathroom use by transgender people, but lawmakers are considering similar bills in several other states, including in South Carolina, where a Republican state senator introduced a so-called “bathroom bill” on Wednesday. This week, Mississippi’s governor also enacted a law that allows businesses to deny service to gay customers on religious objections, prompting New York Gov. Andrew M. Cuomo to ban nonessential state travel there. The backlash has been greater in North Carolina, where PayPal announced it was canceling a $3.6 million investment. More than 120 business leaders around the country have signed a letter objecting to the state’s new law.

“It is catastrophic to the business community and public perception of North Carolina,” said state Rep. Rodney Moore, a Democrat who voted against the measure. “There is absolutely no way to enforce this law, as it relates to the enforcement of the bathroom provisions. It is an utterly ridiculous law.”

Republican state Rep. Dan Bishop, a co-sponsor of the legislation, did not respond to requests for comment. But he has said he never intended for the legislation to lead to bathroom policing. “There are no enforcement provisions or penalties in HB2. Its purpose is to restore common sense bathroom and shower management policy in public buildings, not to pick out people to punish,” he wrote in a statement to WBTV.

But that doesn’t mean people won’t be affected. Oakley of Human Rights Campaign says some transgender people in the state have stopped using public restrooms altogether. They’re “terrified,” she says, and that’s enough to keep them away even if it means enduring physical discomfort. The law, she says, “really puts a fine point on this concern that you are not safe in a bathroom.”