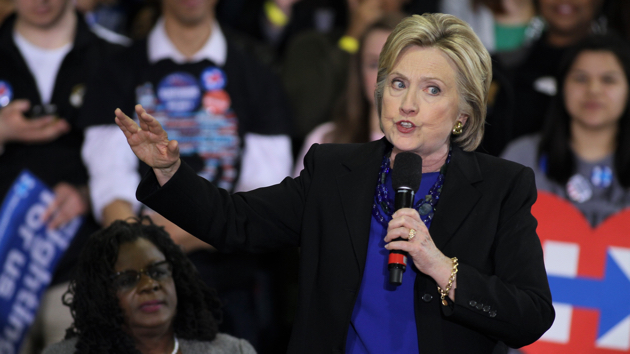 With just a few days left before the Wisconsin primary, both Hillary Clinton and Bernie Sanders are trying their best to convince Democrats in the state that they’re the real anti-Scott Walker.

On Saturday night, Wisconsin’s Democratic elite gathered at a convention center in downtown Milwaukee to listen to a string of Democratic politicians—including both Sanders and Clinton—offer speeches at the party’s annual Founders Day Gala. The crowd was swank, well-connected: Tickets for the gala started at $150 and ran up to $5,000 for a “prime table,” and based on cheers and stickers, the party insiders heavily favored Clinton. But attendees were united in shouting support for any denunciation of their governor, first when Sanders spoke and then again when Clinton took the stage later in the evening (the presidential candidates swept quickly through the convention hall just for their slotted speaking times, so unfortunately there was no public crossing of paths).

“It is terrible to see the damage Gov. Walker and his allies in the legislature have done in just five years,” Clinton said.

“Think about all of the things Gov. Walker does, and I will do exactly the opposite,” Sanders promised for how he’d govern in the White House.

Polls released over the past week have generally shown Sanders holding a narrow lead over Clinton in Wisconsin, including the well-respected Marquette Law School poll that had Sanders ahead by 4 percent earlier this week. Meanwhile, Walker’s approval numbers in the state have sunk since he won reelection in 2014 and then turned his attention to his failed presidential run. Voters in the state now give him a net negative 10 percent favorability. Running by bashing Walker is a reliable way to inspire passion among Wisconsin Democrats.

Clinton tied a host of her regular campaign issues into a referendum against Walker. “We believe that a governor that attacks teachers, nurses, and firefighters, it doesn’t make him a leader, it makes him a bully,” she said. She warned that Ted Cruz and the other Republican presidential candidates would export Walker-style policies nationally, and that the result would be cataclysmic for the country.

In a not-so-subtle jab at Sanders, who has been hesitant to throw his weight behind down-ballot Democrats, Clinton promised to do everything in her power to get Walker out of office and get Democrats back in control of the Wisconsin legislature. “In 2018, we will defeat Scott Walker,” Clinton guaranteed.

She trained her harshest criticism on Rebecca Bradley, a state Supreme Court justice appointed by Walker and who is up for election on Tuesday. During the campaign, liberals in Wisconsin have highlighted Bradley’s past writings, which included a 2006 column in which the judge likens use of birth control to murder. “I had to read this three times, she has actually said birth control is morally abhorrent and doctors who provided it, namely birth control, and women who use it, namely birth control, are party to murder,” Clinton said, her voice full of astonishment.

“There is no place,” she said, “on any Supreme Court, or any court in this country, no place at all for Rebecca Bradley’s decades-long track record of dangerous rhetoric against women, survivors of sexual assault, and the LGBT community.”

Half an hour before Clinton took the mic at the center of the room, Sanders had ripped into Walker for pushing laws to restrict voting access. “I have contempt, absolute contempt, for those Republican governors who do not have the guts to support free, open, and fair elections,” Sanders said. Thanks to Walker, Wisconsin has new strict photo ID law that has made it difficult for some groups—that just happen to skew Democratic—from being able to cast a vote. “I say to Gov. Walker, and all of the other Republican governors who are trying to make it harder to vote for poor people and old people and people of color and young people—trying to make it harder for them to participate in the political process,” Sanders said, “I say to them, if you don’t have to guts to participate in a free and fair election, get out of politics and get another job.”