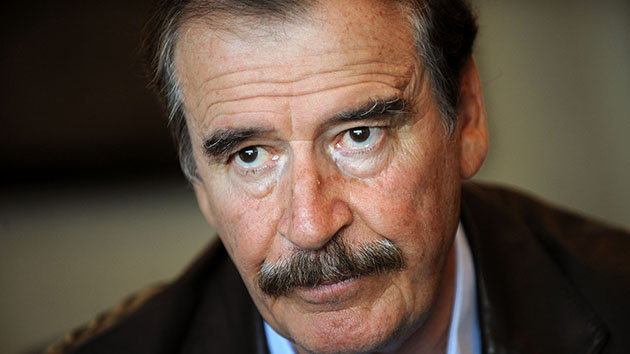 Vicente Fox, the president of Mexico from 2000 to 2006.Andy Holzman/La Daily News/Zuma

With Donald Trump putting Mexico at the center of the Republican presidential conversation, the country’s former president, Vicente Fox, has gone hard at the GOP front-runner, saying, “He reminds me of Hitler.” But Fox, who served as president from 2000 to 2006, has some comparisons for Bernie Sanders that are not much more flattering.

“In Latin America, we have a century of experience of suffering from messianic, populist leaders that have broken our economies, that have brought poverty into all of Latin America,” he said in response to a question about Sanders during an interview with Mother Jones this week. “Yes, I’m talking here about the Hugo Chávezes, the Evo Moraleses, the Kirchners in Argentina, the Peróns in Argentina, and so many of those populists that we’ve had in Latin America.”

In the same interview, Fox continued his assault on Trump and the candidate’s plan to get Mexico to pay for a border wall, calling the proposal “crazy,” “stupid,” and “ignorant.” “Trump, in his genes, is a dictator,” he said. “An absolute dictator. Dictators don’t show it until they sit in power. Look at Hitler, look at Napoleon.”

He also had choice words for Ted Cruz. “He’s as [bad] as Trump,” he said. “The same dogmatic, authoritarian, dramatic way of thinking. That’s not the kind of leadership the United States needs, not even if it were at war.”

Fox backs Hillary Clinton in the race for the presidency, calling her “the only one that has the mature thinking that has high experience in government and how the world works, how diplomacy works, and how the economy works.” He also described her husband as “a very, very successful president.”

Some of Clinton’s critics have pointed to her handling of the 2009 coup in Honduras—and her support of the post-coup government—as a troubling indicator of where she stands when it comes to Latin American politics. Fox did not respond to a post-interview request for comment on Honduras. The Trump and Sanders campaigns did not respond to requests for comment.

“I want to shout loud and clear, wake up America, wake up America,” Fox said in the interview. “These are two false prophets that are going to take you to the desert. They are going to take you nowhere. So for the first time now, Latin America can speak with the voice of experience. We have experienced the Bernie Sanders, many of them throughout Latin America. We have experienced the Trumps, many throughout Latin America in the 20th century. So please, America, don’t listen to these false prophets.”