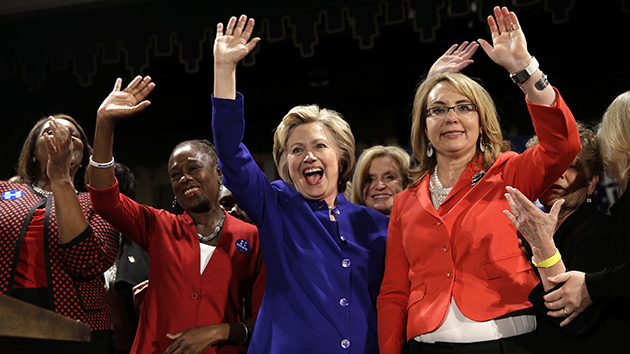 Hillary Clinton leads a rally at a Manhattan hotel.Seth Wenig/AP

Hillary Clinton stood three blocks from Trump Tower on Monday and gave a speech whose target was not her challenger for the Democrats’ nomination, Sen. Bernie Sanders of Vermont, but Republicans Donald Trump and Ted Cruz. “They don’t think we need to raise the minimum wage,” she said. “They don’t believe equal pay is a problem. They sure don’t want to move toward paid family leave.” What they want, she said, is “to strip us of the rights we already have.”

Speaking at a “Women for Hillary” rally at a Hilton Hotel in Manhattan, Clinton was welcomed by an audience of true believers. Two women in the back of the large room shouted, “Yes, yes!” and “It’s true!” in approval throughout her speech. On more than one occasion, attendees embarking on side conversations were shushed by other rallygoers. The crowd, many of them campaign volunteers, said they expected Clinton to do well on Tuesday. But for Clinton, who spent eight years as one of the state’s senators, the New York primary has turned into a slog.

The Clinton campaign has not left anything to chance. In the race’s final days, Clinton, as well as Chelsea Clinton and Bill Clinton, have held events across the state and in the city’s five boroughs. Jay Jacobs, the chairman of the Nassau County Democrats and a Clinton supporter, says the campaign has done a good job preparing for the primary. “It’s reached out to the right people, it’s engaging the right constituency groups: It’s linked up with sympathetic unions, certainly members of the clergy in the African American community and Latino communities, and I would say women’s groups and other progressive groups that have been natural allies,” he said. “All of these groups have been coalescing around the get-out-the-vote operation.”

But Sanders has been steadily gaining on Clinton. While Clinton once lead by about 30 points, polls have shown the race tighten over the past few weeks; the Real Clear Politics polling average now puts Clinton’s lead at 12 percentage points. While Clinton has typically hosted modestly sized events, Sanders has repeatedly drawn crowds that would be impressive for a general election candidate—according to the campaign, 18,000 in the Bronx, 27,000 in Washington Square Park, and more than 28,000 in Brooklyn’s Prospect Park. And his campaign has the support of New York’s Working Families Party and their formidable get-out-the-vote operation.

At the end of the day, however, the nomination comes down to delegate math, and at this point in the race that means that New York favors Clinton. Party rules allotting delegates on a proportional basis will make it very hard for the winner to make off with substantially more delegates than their opponent, absent a landslide victory. In most congressional districts, for example, the victor would have to earn more than 57 percent of the vote to win more delegates than the runner-up. So even if Sanders exceeds expectations, New York is not likely to help him narrow Clinton’s lead in delegates won through primaries and caucuses. (Clinton is beating Sanders by 1,307 to 1,094 among such pledged delegates; her progress toward amassing 2,383 delegates, the number to secure the nomination, is boosted by the 469 superdelegates who have pledged to support her, versus the 31 backing Sanders.)

New York’s Republican contest Tuesday also comes down to delegate math. The question is not whether Trump will win, but by how much. Unlike earlier winner-take-all Republican contests in major states, New York’s GOP allocates its delegates proportionally. Trump’s margin of victory in New York will help decide whether he will walk into the Republicans’ Cleveland convention with enough support to win the nomination outright, or whether he’ll fall just short, leaving the front-runner vulnerable to being denied the nomination at a historic contested convention. (Trump currently has 743 of the 1,237 delegates necessary to clinch the party’s nod. Texas Sen. Cruz trails with 543 and Ohio Gov. Kasich is far behind with 144.)

The most important numbers for Trump, Cruz, and Kasich in New York are 50 and 20. The state party awards three delegates in each congressional district and 14 at-large delegates. If a candidate gets more than 50 percent of the vote in a given district, they take all three delegates. But if the winner nets under 50 percent, he takes two delegates and the second-place finisher takes one. Candidates who get less than 20 percent are not eligible for any delegates from that district. The same math applies to the state’s 14 at-large delegates: If Trump gets over 50 percent statewide, he takes them all; otherwise, they are divided proportionally among every candidate who exceeds 20 percent.

So the big question for Republicans is whether Trump will hit 50 percent statewide. It’s unclear how many districts he can win with an outright majority, thereby shutting out Kasich and Cruz from delegates. Meanwhile, Cruz and Kasich will be struggling to top 20 percent across the state, and in most districts. “Cruz has a very limited constituency in New York,” says Republican consultant Jay Townsend. “He is such a social conservative, and they don’t run well here. It’s not Alabama.”

Though Kasich is far behind in the delegate race, he can do well enough to do significant damage to Cruz’s push for delegates. Kasich could beat out Cruz for second place in districts both upstate and in New York City, or even nab first place in a few New York City districts.

Going into Tuesday, the Real Clear Politics polling average put Trump at 53 percent, Kasich at 23 percent, and Cruz at 18 percent—under the critical 20 percent threshold. “Kasich is probably more in line with the majority of New York Republicans intellectually, ideologically, so I think Kasich will be a great inhibitor for Ted Cruz in New York,” says Bill O’Reilly, a Republican strategist in the state. “I think Kasich may do better than expected.”

For Republicans, “the headlines are less significant than the delegates that come out of New York,” says O’Reilly. For Democrats, it’s the reverse. The math is already in Clinton’s favor. She just needs the headline to prove it.