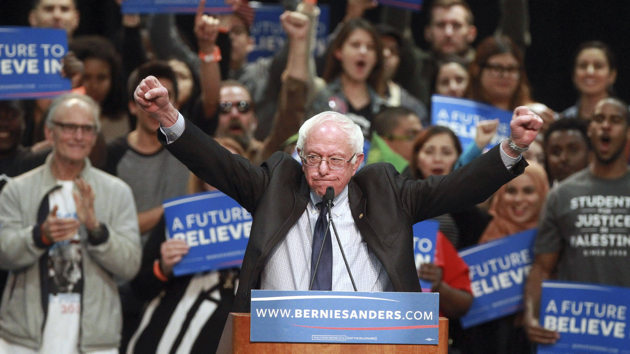 Bernie Sanders’ campaign used to dismiss poll numbers. The insurgent candidate has long trailed Hillary Clinton in national surveys, and his numbers have tended to only rise state by state as the campaign turns to each new contest.

But now that he’s gained more national attention, Sanders has started to sound downright Trumpian and in love of touting the latest stats on his campaign. While stumping at a high school gym in Sheboygan, Wisconsin, on Friday afternoon, Sanders kicked off his normal speech by adding a bit of bragging about a host of favorable numbers.

“When we began this campaign, we were 3 percent in the polls. Three percent. We were about 60, 65 points behind Secretary Clinton. I think it’s fair to say we made up some ground in the interval. A national poll had us a point ahead last week.”

A lonely poll showing a statistically insignificant lead isn’t usually great news for a campaign. And in fact, polling averages suggest Sanders trails Clinton by about 9 percent in surveys of Democrats across the country. But that outlier, from a poll conducted by Bloomberg Politics, was enough to draw loud applause from the Sanders fans packed high into the gym’s rafters.

No 2016 candidate has boasted about polls quite as much as Donald Trump, who has deployed positive numbers to underscore his booming appeal. But Sanders is now using Trump as his foil to brag about his own numbers, arguing that he’d be a better bet for Democrats than Clinton in a general election contest against the Republican front-runner. “What more and more people, I think, are understanding is that our campaign would be by far the strongest campaign against Donald Trump,” Sanders boasted. “This is true.”

Sanders pointed to a CNN poll from last month that showed him beating Trump by 20 percent nationally: “And that’s before he really began to expose what a nutcase he really is.” While Sanders’ citation of the single Bloomberg pool is a thin reed to argue he’s favored by more Democratic voters, the numbers are so far clearly on his side in hypothetical general election matchups with Trump. According to the averages compiled by RealClearPolitics, Clinton would beat Trump by 10 percent, while Sanders leads The Donald by a heftier 15 points.

Sanders closed off the poll-focused section of his Friday speech by turning his attention to Wisconsin. “It’s not only national polls which have us defeating Mr. Trump by a large number,” Sanders said. “A recent Marquette University poll, right here in Wisconsin, had Secretary Clinton beating Trump by 10 points. That’s not bad. We were beating him here in Wisconsin by 19 points.”