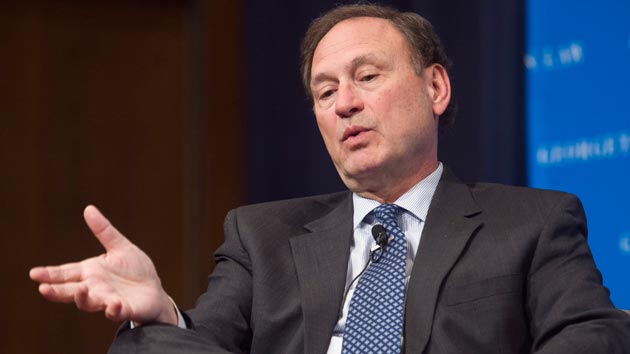 Supreme Court Justice Samuel Alito has earned a reputation, fairly or not, that he doesn’t understand the reality of women’s lives. He’s been observed shaking his head and rolling his eyes at his female colleagues, particularly the venerable Justice Ruth Bader Ginsburg, when she read a dissent from the bench opposing his opinions in a pair of gender discrimination cases. The oral arguments in Zubik v. Burwell Wednesday probably did nothing much to improve that perception.

Alito is the author of the controversial 2014 decision in Hobby Lobby v. Burwell, in which the court held that a for-profit corporation could deny employees insurance coverage for contraception because of its religious beliefs. As part of the Affordable Care Act, better known as Obamacare, Congress required employers who provided their workers with health insurance to offer coverage for contraception at no cost. Hobby Lobby had objected to that requirement on the grounds that providing access to some contraceptives, such as IUDs—which the company’s owners insisted (wrongly) were abortifacients—violated their strongly held religious beliefs.

In his opinion in that case exempting Hobby Lobby from the contraceptive mandate, Alito promised the court’s ruling would have “precisely zero” impact on women and their ability to access free contraception because the Obama administration had provided a workaround for religious organizations, and that could be applied to Hobby Lobby, too. An organization merely had to alert the government of its religious objector status, and the government would work with its insurance companies to provide the mandated contraception coverage without the employer having to pay or otherwise get involved. That way, Alito suggested, women would still get their birth control, their employers would not compromise their souls, and everyone would win.

That workaround was at the center of the case the court heard Wednesday, after it was challenged by dozens of religious nonprofits, including the religious order, the Little Sisters of the Poor, and various Catholic universities. They allege that even the simple act of notifying the government of their religious objections to the contraceptive coverage would still enable that coverage to be provided, and would therefore make them complicit in sinful activities.

The case puts Alito in a bind, given that he specifically relied on the accommodation the nuns are challenging to justify his opinion in Hobby Lobby.

The case puts Alito in a bind, given that he specifically relied on the accommodation the nuns are challenging to justify his opinion in Hobby Lobby. If he were consistent, he’d end up voting with the liberals in this case and ruling that sending some paperwork to the government to ask for a religious exemption is not a particularly onerous burden on their religious freedom—a conclusion eight out of nine lower courts have reached.

But it was clear during Wednesday’s oral arguments that Alito’s loyalties to the Catholic Church and strong commitment to religious freedom were clearly dominating his reasoning. He appeared to be grasping for an alternative in which the religious groups could distance themselves even further from insurance coverage that might compromise their beliefs. He raised an idea proposed by the petitioners: Instead of having the religious organizations’ insurance companies provide contraceptive coverage, the government ought to offer contraception-only insurance plans, maybe on the federal health insurance exchanges.

“Suppose that it were possible for a woman who does not get contraceptive coverage under…a plan offered by a religious nonprofit to obtain a contraceptive-only policy free of charge on one of the Exchanges. Why would that not be a less restrictive alternative [to the notification requirement]?” he asked Solicitor General Donald Verrilli, who was arguing for the government. “Is it because these Exchanges are so unworkable, even with the help of a navigator?” he asked, oozing with irony.

Alito’s pointed question about the Affordable Care Act, which is responsible for creating the exchanges and which Alito voted twice to overturn, elicited laughs. With a bit of a rueful chuckle, Verrilli shot back that one obvious reason why such a plan wouldn’t work is that it would be illegal. No such insurance can be sold on the exchanges under federal law. But aside from that, creating separate contraceptive coverage as Alito suggested would defeat the very goal Congress outlined when it mandated the contraceptive coverage in the first place. Verrilli explained that overwhelming evidence shows that even small cost barriers to contraception keep women from using it, which in turn results in more unplanned pregnancies and abortions. Congress wanted women to be able to get contraception seamlessly, from their regular doctors and through their regular health insurance plans.

Having to go out and purchase a separate contraceptive plan—which he doubted any insurance company would offer anyway—would create huge headaches and additional barriers to women. “Consider this, please, from the perspective of the woman employee,” Verrilli told Alito. “She has a health plan from her employer. She goes to her doctor, her regular doctor. She may have a medical condition that makes pregnancy a danger for her. She may be one of the women…who needs contraception to treat a medical condition, or maybe she just wants the contraception that’s appropriate for her.” If the government adopted what Alito was proposing, he continued, “her regular doctor has to say to her, ‘Sorry, I can’t help you.'” The doctor would not only be prohibited from writing the prescription; she’d be unable to counsel her patient about her options because of the prohibitions on her employer-based insurance.

“Consider this, please, from the perspective of the woman employee,” Verrilli told Alito.

Alito was not persuaded. “Why do you assume that the doctor to whom the women would go for other services under the plan would be unwilling to provide those services under a separate plan that covers contraceptives?” he asked, suggesting that having another insurance plan was no more complicated than getting an additional card, as often occurs with dental or vision coverage.

It was the sort of question you might expect from someone who has had little experience with the world of private-sector health insurance. Except for a very brief stint at a private firm after law school, Alito has never worked in the private sector. He went from the US Attorney’s Office in New Jersey to the Reagan Justice Department to the 3rd Circuit Court of Appeals to the US Supreme Court—a seamless stretch of federal employment, where he has had access to some of the best private health insurance of any group of Americans. Plans in the Federal Employees Health Benefits Program include a large, national network of doctors, protection against being charged extra for preexisting conditions, and unusual continuity of care. His questions during the arguments suggested that Alito has probably never worried about whether a doctor he wanted to see would take his insurance, much less encountered a physician who took no insurance at all because the paperwork simply had become too onerous.

A contraceptive-only insurance plan seems unwieldy on its face. Aside from the practical difficulties of Alito’s proposal, at least one amicus brief in the case indicates that his alternative would also be a huge violation of Title VII of the 1964 Civil Rights Act because of the way it singles out women for disparate treatment in health care. Politically it’s also utterly unfeasible, as was his suggestion that such plans could be created if Congress offered to subsidize them at 115 percent of the cost. At a time when Congress and Republican state governments are trying to defund Planned Parenthood and shut down clinics that offer cheap contraception, it’s hard to imagine any Congress in the near future creating special subsidies to give women birth control plans, even if some elderly nuns and a few other religious groups don’t want to fill out a form.

Such practicalities didn’t seem to carry much weight with Alito. But he is consistent; Justice Ginsburg has repeatedly scolded him for being out of touch with the realities of women’s lives in previous discrimination and reproductive rights cases. Even so, women’s groups seemed fairly convinced that Alito would, for once, take their side in this case because of his opinion in Hobby Lobby. Before the oral arguments, Gretchen Borchelt, vice president of reproductive rights and health at the National Women’s Law Center, which filed a brief in the Zubik case, said in a press call, “It would be unacceptable for the Supreme Court to invalidate a provision it proposed just two years ago [in Hobby Lobby].” Predicting that Justice Anthony Kennedy seemed a likely vote for the government, she declared, “We’re confident in a 5-3 decision here.”

Alito seemed intent on dashing those hopes. At the very least, he appeared ready to force the government to burden women with a more complicated, less effective means for accessing contraceptive coverage to prevent a very minor compromise of religious freedom. Chief Justice John Roberts Jr. seemed inclined to agree with him, at least in voting against the government’s position. And Kennedy expressed frustration with both sides of the case, leaving his critical swing vote completely unpredictable.

Fortunately for women, perhaps, the court is short a member right now, and even if Alito backpedals on his promises in Hobby Lobby and votes along with the other conservatives to defang the contraceptive mandate, the court is likely to deadlock 4-4 in the decision, which means the lower court rulings will stand. So women who work for religious organizations, including universities, in the eight federal appellate court circuits where the courts have ruled for the government in these cases, should be able to get free contraceptive coverage. But the women in 8th Circuit states—Iowa, Missouri, Minnesota, Arkansas, Nebraska, North Dakota, and South Dakota—which voted in favor of the religious groups, may have to wait until after the presidential election, when a new president may finally be able to appoint a ninth justice to the court, and the conflict gets resolved once and for all.