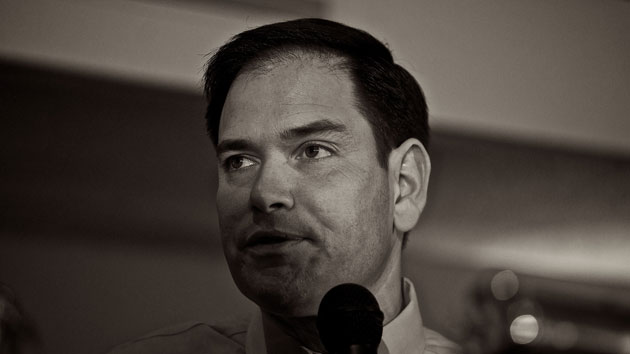 When Marco Rubio first ran for Senate in 2010, the New York Times magazine billed him on its cover as “the first senator from the tea party,” an insurgent candidate who seized on the dissatisfaction rank-and-file conservatives had for their leadership in Washington and would move the party hard to the right. Rubio had a lot of things going for him in that campaign—he was young, good looking, bilingual, and well schooled in conservative dogma—but the biggest advantage of all was that the people with the pitchforks were on his side. Of Rubio’s opponent in that race, then-Gov. Charlie Crist, the Times offered an ominous and prescient judgment: “He may not be angry enough to win a Republican primary this year.”

Now, after finishing behind Donald Trump by double digits in his home state of Florida on Tuesday, Rubio is effectively toast. He has no chance at picking up the 1,237 delegates needed for the nomination, and he lacks the gravitational pull to even play the role of spoiler. Rubio spent more time in the Sunshine State than any other candidate over the past week, virtually ignoring the other winner-take-all states that voted Tuesday, in the hopes of a miracle that never materialized. The delegate math doesn’t lie; when his Senate term expires in January, he’ll be out of a job.

There are many reasons why Rubio flamed out of the presidential race after winning just one state (plus Puerto Rico and Washington, DC). He should have probably tried harder to win an early primary state, rather than banking on picking up delegates down the road; it would have been smart to take on Trump before he was the odds-on favorite for the nomination; and it didn’t help that his old friend Jeb Bush spent millions of dollars to tear Rubio apart. But the epitaph for Rubio’s presidential bid comes down to this: He wasn’t angry enough to win a Republican primary this year.

Voter rage swept Rubio into the Senate in 2010 as part of a tea party revolution. But after six years, the rage is back and the archconservative candidates who rode the tea party wave to victory are now the establishment bums whom voters are looking to purge. In Rubio’s case, his sin was easy to pinpoint. Every Trump and Cruz voter I spoke with this week in Florida voted for Rubio when he ran in the Republican Senate primary six years ago. But nearly all of them cited the same reason when I asked why they weren’t backing Rubio’s presidential bid—two years ago, he was part of the “Gang of Eight” in the Senate that attempted to negotiate a bipartisan compromise on immigration reform.

At the time, it seemed like the right thing for an up-and-coming Republican to do; the party’s autopsy after the 2012 presidential election had warned that unless Republicans could take some credit for meaningful immigration reform, it would continue to be doomed among Hispanic voters. But just as Crist’s sins of moderation doomed him against the insurgent Rubio, Rubio’s hint of empathy for undocumented immigrants put him on the wrong side of a popular uprising. In 2010, it was the tea party; in 2016, it was Trump.

He didn’t do himself many favors. For much of his campaign, Rubio was on-message to a fault. His stump speech rarely changed and his debate performances sounded canned. If you wanted to pinpoint the moment his slide truly became irreversible, when the Stench started to emanate from his campaign, it was at the last debate before the New Hampshire primary, when New Jersey Gov. Chris Christie mocked Rubio for repeating the same line three different times. At first Rubio played it off as a strength; then he pledged to never do it again.

In the last week, though, he changed things up. After spending months insisting that all was well no matter how many states he lost, Rubio began telling crowds that he didn’t fear defeat, because what’s the worst thing that could happen—he’d just look for a new job. And for the first time since entering the race last summer, he ripped into Trump, the Republican front-runner, not just for the things that make Trump unpalatable to the Republican National Committee, but for the things that make him unpalatable to normal people. Rubio compared Trump to a “third-world” strongman and accused him of fostering a climate of hate and violence. His press conference on Saturday ahead of a rally in Largo was one of the most unvarnished moments of the entire campaign:

.@MarcoRubio: I still intend to support the Republican nominee “but it’s getting harder every day.” https://t.co/4rEnEzqKqC

It was a brief glimpse of the Rubio that made Democrats sweat—a normal-ish guy who delivers his lines well if you wind him up properly—but Rubio’s last-minute awakening was also an appropriate symbol of the Republican Party as a whole. He spent most of his race acting as if  Trump didn’t exist and fending off attacks from virtually every other candidate, and when he woke up to the existential threat to his career, it was too late. Sooner or later, the mob comes for us all.