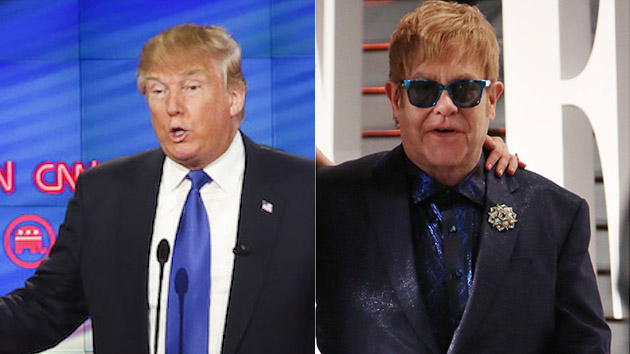 Donald Trump’s leap to the front of the Republican presidential pack has been fueled by consistent support among self-described evangelical voters, and as a candidate he is on record as opposing same-sex marriage. As the Human Rights Campaign puts it:

Trump has been a consistent opponent of marriage equality. He said that he opposed it because he was a “traditional” guy, choosing to support domestic partnership benefits instead. Trump later reversed himself and said he also opposed civil unions. Despite a brief flirtation with “evolving” in 2013, Trump has consistently maintained his opposition to marriage equality, sometimes by citing polling and making an analogy to his dislike of long golf putters. After the Supreme Court ruling, Trump said the court had made its decision and, although he disagreed with the ruling, he did not support a constitutional amendment that would allow states to re-ban marriage equality. He later said he would appoint Supreme Court judges who would be committed to overturning the ruling.

But once upon a time, Trump was in favor of same-sex marriage—at least one such marriage. That was when Elton John wedded his longtime partner David Furnish.

In December 2005, Trump wrote a blog post on the website of his now-defunct Trump University, and it was one big wet kiss to Elton and his groom, declaring their marriage a holiday-season happening to celebrate. Here is the full post:

Elton credits David with helping him kick drug and alcohol addictions that nearly killed him. The pair has been together for 12 years. I know both of them and they get along wonderfully. It’s a marriage that’s going to work.

Elton made the ceremony a small private affair involving only his and David’s parents as witnesses. The couple just didn’t want to make a big deal out of the wedding. They really wanted to keep things low key.

By all accounts, Elton and David had every tabloid and every entertainment magazine knocking at their door begging for exclusive rights to the affair. By some news reports, the couple turned down an offer of $11 million to record their wedding for British television. But Elton said, “Our relationship isn’t up for grabs. It doesn’t come with a price tag.”

(But because I wasn’t invited, do I still have to send them a toaster?)

Those are hardly the words of a man sincerely opposed to same-sex marriage. Has Trump evolved in the reverse direction? In January, Trump said that if elected president he would “strongly consider” appointing Supreme Court justices who would overturn the court’s ruling legalizing gay marriage.

Meanwhile, Elton John also appears to have forgotten Trump’s well-wishes for his wedding. Last month, he told Trump to stop using his songs at campaign rallies. 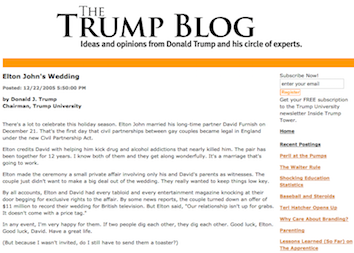