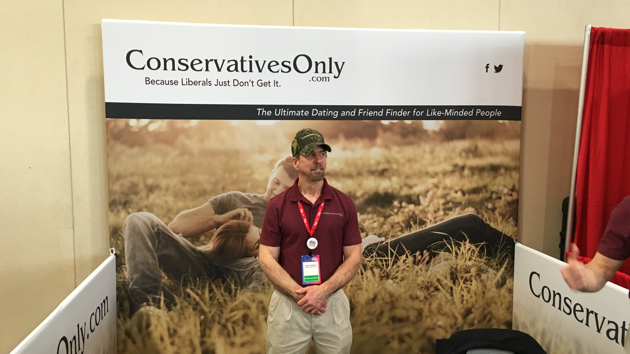 The annual Conservative Political Action Conference tends to draw a large crowd of college-age Republicans and has long been known as a party scene, where young conservatives can let loose. So it wasn’t surprising to find that the first booth past the door of the exhibition hall this year is “Conservatives Only,” an online dating website strictly for those who lean right.

“We’ve made it easy and safe to meet fun, intelligent, conservative men and women,” the website says, “looking for relationship experiences ranging from friendships and casual dating to a partner for life.”

This is hardly the only politically oriented dating website. Last month, BernieSingles.com launched for people feeling the Bern. But Conservatives Only has been around for a while. It launched in 2012, although it has so far only amassed about 3,000 profiles. With those users spread across the country, dating options are likely limited in many regions.

The site’s founder, Craig Knight, had traveled from Lubbock, Texas, to man the booth at CPAC. He was decked out in a camo baseball hat and red polo, both emblazoned with his website’s name. “I don’t care if it’s liberals or conservatives; it’s a dating deal-breaker to try to date someone from the other side,” Knight said.

Knight didn’t want to tell me too much about his own life—he declined to offer his age or profession, or the names of other online dating websites he’d tried before creating his own—but did say that he started the site four years ago after growing frustrated by his own difficulty finding an ideologically compatible partner on other dating websites. “Let’s face it, it’s a visual thing,” Knight said of online dating. “First you look at a person’s picture, and you say either that guy is good looking or this girl is cute, and you end up going through their profile and you read it, and it doesn’t particularly say anything about what their political leaning is. Then you start emailing back and forth, and putting a lot of potential into that person, then find out that they’re on the other side of the aisle, so to speak. And immediately the person knows that it’s not going to fit for them.”

The site allows users to look for anything from casual dating to long-term relationships, though most people who sign up are looking for something serious, Knight said. Most users are between 35 and 55 years old, and Knight has been surprised that the highest concentration of users has come in California. But conservatives signing up need not worry that it’s stocked with liberal trolls. “The people who sign up with profiles, they’re highly screened in many different ways,” Knight said. Which ways? “That I cannot reveal,” he responded. “But I will tell you if there are any problems with people, any people causing trouble, people spamming, any kind of stuff like that going on, they’re out.”

Knight is currently running a free membership drive for CPAC, though Conservatives Only is usually a paid website.

The presidential election has, of course, intruded on the dating world. Knight said that users have begun listing on profiles whether they’re fans of Ted Cruz or Donald Trump—there’s not much love for Marco Rubio so far—but it doesn’t seem like the Cruz and Trump crowds have avoided intermingling, as far as he could tell.

Knight said that he didn’t seek dates on the website himself—”I don’t mix business with pleasure,” he said, “and I’m not on any dating sites at all right now”—but was looking forward to his first trip to CPAC, and wasn’t opposed to finding a match IRL.