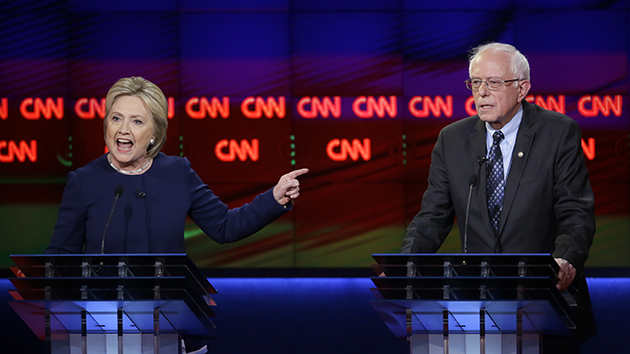 After a surprising loss in the Michigan primary on Tuesday night, Hillary Clinton’s campaign contends it is still on track to win the nomination, thanks to the delegate math. And her campaign strategists are not second-guessing the decisions that likely hurt her in Michigan—and could haunt her next week in three more significant Midwestern contests.

“From the beginning, we have approached this nomination as a battle for delegates,” campaign manager Robby Mook said Wednesday on a conference call with reporters. “Last night really showed why that approach made sense.”

The election results are not yet final, but Clinton did earn more delegates Tuesday night than Sanders, and Mook stressed that Clinton is ahead by more than 200 in the pledged delegate count. (The tally now is 745 for Clinton to 540 for Sanders, according to Real Clear Politics, with 2,382 needed for the nomination—Clinton claims 462 superdelegates to Sanders’ 25.) “We are confident that we are nearing the point where our delegate lead will be effectively insurmountable,” Mook said.

But Mook acknowledged that Clinton may lose other states before she secures the nomination. Looking ahead to March 15, when voters head to the polls in several delegate-rich, winner-take-all states, Mook continued to stress the math, though downplaying Clinton’s lead in the polls. Polls show she is significantly ahead in Florida and North Carolina. But Ohio, Illinois, and Missouri could pose problems similar to what she encountered in Michigan. Those states are close demographically to Michigan and also have struggled with the loss of blue-collar jobs. Clinton is leading in the polls in those states, yet Mook advised treating those polls “with skepticism.” He said each of these states would be competitive. But he noted he expects Clinton to win by large margins in Florida and North Carolina and argued that even if Clinton were to lose the three Midwestern states, she would not fall behind in the delegate count.

Mook rejected the idea that the two major issues that played a role in Michigan could hurt her in other Midwestern states: her past support for free trade deals, such as NAFTA, which have cost manufacturing jobs, and her claim that Sanders opposed the auto industry bailout. “I would put Secretary Clinton up against any candidate in this race on the issue of trade,” Mook said. “She voted against bad trade deals in the Senate, she came out against the TPP, and she has been very clear that she will not support any trade deal that does not create jobs and raise wages here in the United States. So we feel confident about her position and her record on that particular issue.” Still, Sanders won 57 to 30 percent among voters who cited trade as their top concern, according to CNN’s exit poll.

Mook was similarly defiant regarding Clinton’s auto bailout attack on Sanders. In last Sunday’s debate, Clinton accused Sanders of not supporting the auto industry rescue, pointing to the Wall Street bailout that was also used to shore up automakers. Sanders defended himself with radio ads in the closing two days of the race, and his campaign decried the attack as a distortion of Sanders’ record. It certainly didn’t help win the race for Clinton.

Yet Mook stood by the attack and said the campaign would stick with it. “That is an important distinction between Secretary Clinton and Sen. Sanders,” he said. “We think it’s important that voters know that information.”

Mook continued: “Her point all along was that you can’t just be with the auto industry when it’s convenient—that leaders, especially presidents, face tough choices, and when the auto industry really needed Sen. Sanders, he wasn’t there.”

In the fall of 2008, Sanders voted in favor of a bailout for the auto industry that ultimately did not pass. Subsequently, President George W. Bush tapped Wall Street bailout funds to aid car companies. Sanders voted against releasing more of this money in January 2009, a small portion of which was earmarked for Detroit.