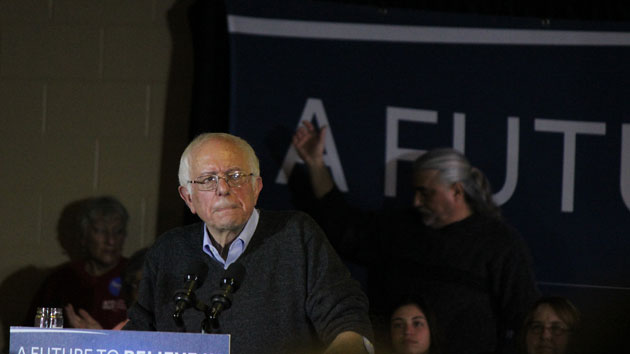 For months, Bernie Sanders’ presidential campaign has counted on a big performance on Super Tuesday, when delegates were up for grabs in 11 nominating contests. After it racked up a big win in New Hampshire and came away with virtual ties in Iowa and Nevada—and lost disastrously in South Carolina—the senator from Vermont was quick to point out that on March 1, voters “will pick 10 times more pledged delegates on one day than were selected in the four early states so far in this campaign.” And on March 1, his campaign got shellacked.

In five Southern states, where African American voters made up a large portion of the electorate, Hillary Clinton left Sanders in the dust. Three days after conceding the South Carolina primary by 48 points, he lost by overwhelming margins in Alabama, Georgia, Tennessee, Virginia, and Arkansas. In Texas, where the majority of Democrats are nonwhite and 252 delegates were at stake, he lost by more than 30 points. Sanders banked heavily on strong performances in Massachusetts, Minnesota, Colorado, and Oklahoma, and he was counting on winning at least three of them. (He’d left South Carolina behind last week to campaign with Iron Range workers in Bob Dylan’s hometown of Hibbing, Minnesota.) He did win three, along with his home state of Vermont, where just 26 delegates were at stake. But a loss in Massachusetts was a setback, and the enormous margins down South set him way back in the delegate count.

Tuesday’s results put Sanders in a difficult position as the campaign shifts into high gear this month, because they challenge the underlying theory of how he can win. The premise of his underdog campaign was that he could score a few early victories and build momentum for states down the road. Once voters in those states saw he was the real deal, the thinking went, they’d give his candidacy a second look. Those early victories were essential to expanding his coalition and, to a lesser degree, to convincing at-large superdelegates to join his side. To put it bluntly: If Sanders can’t win a white liberal state like Massachusetts, there aren’t too many other states he can.

Things will get worse for Sanders before they get better. Because of the way the primary map is drawn, Clinton’s best states—basically, Southern states with high African American populations—will all have voted by the middle of March. After Kansas, Nebraska, and Louisiana vote on Saturday (where the prospects are good, good, and very bad for Sanders, respectively), he’ll hit a brutal two-week stretch in which 980 delegates will be awarded in Maine, Michigan, Mississippi, Florida, Illinois, Missouri, North Carolina, and Ohio. Clinton is the clear favorite in almost all of those states.

But while Tuesday’s performance might usher in the chorus of Clinton allies calling on him to drop out (as if they needed the excuse), Sanders’ campaign manager, Jeff Weaver, pledged that the campaign would push on to the convention. And he has the means to fight on if he wants. Money, the perennial candidate killer, is not an issue—at least not for now. Sanders raised an absurd $42 million in February—$6 million of it on the Monday after the South Carolina blowout. Because he relies so heavily on small-dollar donors who haven’t hit the $2,700 limit, he can in theory keep circling back for more money to buy ads and build organizations in every state that comes up. And if he can roll with the punches, he just might make it to the sweet spot of the schedule, a four-week, 15-state stretch that represents his last best shot to turn things around, starting with Idaho, Utah, and Arizona on March 22. If he can’t reel off a winning streak then, it’ll be over quick.

Sanders seems determined to push forward, but he has given little indication he’ll try to replicate the kind of scorched-earth approach his opponent employed against Sen. Barack Obama eight years ago, or that the Republican field is currently employing against Donald Trump. He’s not running again in four years, when he’ll be 78; he’s not angling for a spot on the ticket; and he’s made clear he plans to support whomever the Democrats nominate.

Moments after he lost in South Carolina last Saturday, his campaign blasted out yet another fundraising email, this time with a message from the candidate. “When I first decided to run for president,” he wrote, “my greatest fear was that if I were to run a poor campaign or did not do well, that it would be a setback not just for me, but for the ideas driving our campaign.” It was a glossier version of what he’d told a reporter last March, months before he ever entered the race—that “if I do it, it has to be done well, and that’s not just for my ego.” He’s done all of that and accomplished a great deal, but the math is looking pretty grim.