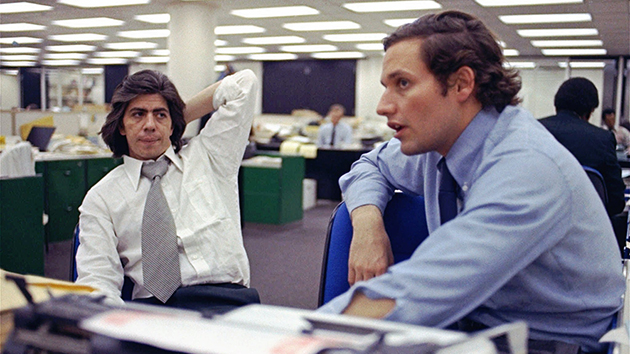 Earlier this month, Carl Bernstein—half of the reporting duo that helped expose the Watergate scandal in 1972—went on CNN to volunteer an observation about Hillary Clinton’s failure to release the transcripts of her paid speaking gigs at Wall Street firms. “Now, you’ve got a situation with these transcripts,” he said, “a little like Richard Nixon and his tapes that he stonewalled and wouldn’t release.”

“Whoa” is an appropriate reaction. It’s safe to assume that the transcripts of those speaking gigs would be a mild embarrassment for Clinton, who is trying to prove that she would take on Wall Street as president. Most people do not predict that the transcripts will implicate Clinton in a vast criminal conspiracy—as the tapes that had recorded all of Nixon’s Oval Office conversations confirmed about him.

Bernstein is not the only person bringing up Watergate to describe Clinton. His partner-in-exposing-crime, Bob Woodward, is also fond of comparing Clinton to Nixon. Woodward, who appears often on Fox News shows to discuss Clinton’s recent travails—her appearance before the House Select Committee on Benghazi, controversial donations to the Clinton Foundation, the investigation into her use of a private email server as secretary of state, and her refusal to release transcripts of her Wall Street speeches—has on multiple occasions given into the temptation to talk about Watergate.

It’s been more than 40 years since Woodward and Bernstein helped uncovered the Watergate scandal that ultimately took down a president and launched the two reporters to fame, fortune, and illustrious careers. Even after all this time, they just can’t stop talking about Watergate—and placing Clinton into the Nixon role.

June 17, 2015: Woodward went on Fox News to talk about donations to the Clinton Foundation with host Bill O’Reilly. “If you go back to the Nixon era, he had a campaign reelection committee, and the story was that it had really very little connection to the White House,” Woodward explained. “When you dug into it, you found that the reelection committee was taking orders from the White House. The question here in the Clinton Foundation, in all of these activities, including the speeches: Exactly how is it organized? Who decides?”

August 16, 2015: Fox News Sunday host Chris Wallace asked Woodward, a frequent guest on his show, whether he sees parallels between Clinton’s email controversy and the Nixon tapes. “Fascinating question,” Woodward responded. “In fairness, nothing has been proven and I think the Clinton team wants to make sure this is not a protracted legal fight like happened with Nixon and his tapes. But if you look at Nixon in the history of this on the tapes, Nixon would always say, ‘Oh, yeah, everything was fine.’ It looked good. He didn’t remember the bad stuff. And that’s human nature. We don’t remember the bad stuff. And 60,000 emails, my god.”

August 17, 2015: “Follow the trail here,” Woodward said on MSNBC’s Morning Joe, where he often appears as a commentator. “There are all these emails…You’ve got a massive amount of data—in a way, reminds me of the Nixon tapes: thousands of hours of secretly recorded conversations that Nixon thought were exclusively his.”

November 1, 2015: Howard Kurtz pressed Woodward over his comparison between the Nixon tapes and Clinton’s emails on his Fox News show MediaBuzz. “On those tapes, we later learned, we now know as part of history, he talked about cover-ups and burglaries, and wiretapping,” Kurtz said. “Are you assuming there’s something nefarious in Hillary’s—”

“No, I am not assuming anything,” Woodward said, cutting off Kurtz to walk back the implications of his comparison. “But it’s the volume, 60,000 emails. Give me 60,000 of your emails, and I will learn a lot about you. Everyone always says something in an email that perhaps they wish they didn’t say. So, you know, we’re going to see, but again it’s the in-depth work, and in this case we have the FBI doing it for us.”

January 10, 2016: Woodward, again on Fox News Sunday, raised the specter of Nixon to explain the latest development in the Clinton email scandal. “Look, here is Hillary Clinton, somebody who worked on the staff of the Nixon impeachment committee, and what was the lesson—one of the lessons from that?” Woodward said. “Never write anything down. She did years of Whitewater investigations where she was the target, and here, many years later, she’s saying, ‘Oh, let’s subvert the rules,’ and writing it out herself? You know, whether that’s some sort of crime, I think, is not the issue. The issue is, it shows she kind of feels immune, that she lives in a bubble, and no one is ever going to find this out. Well, now we have.”

October 7, 2015: When congressional Republicans brought Clinton to Capitol Hill last October to testify on the deadly attack on the American consulate in Benghazi, Libya, Woodward and Bernstein continued to invoke Watergate—in order to say that this situation was in fact quite different from the Nixon scandal. “This is not Watergate,” Bernstein said on CNN, about two weeks before Clinton testified before the Benghazi committee. “Hillary Clinton is not a criminal president of the United States.”

October 18, 2015: “The successful congressional investigations eventually become bipartisan,” Woodward explained on CBS’s Face the Nation. “The Senate Watergate Committee was set up by a vote in the Senate 77-0, dozens of Republicans saying, ‘Yes, we need to look at this.’ And now we’ve got a fractured committee and so you wind up getting fractured partisan data.”

October 20, 2015: “There is no resemblance between Watergate and what we are watching now with Benghazi and Hillary Clinton,” Bernstein said on CNN, where he often appears as a commentator. “Watergate was about a criminal president of the United States who presided over a criminal presidency from his first days in office to the last. Whatever Hillary Clinton has done, it is nothing resembling that and it’s time to get the decks cleared on that once and for all.”

And yet, they can’t stop mentioning it.